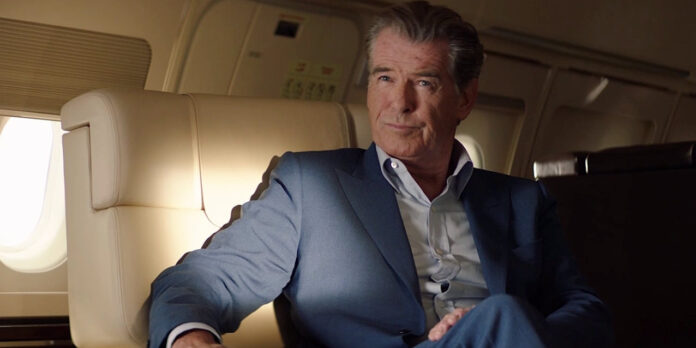 THE STORY – A band of modern-day Robin Hoods recruits a renowned thief to help steal millions in gold bars stashed underneath one of the world’s most secure prisons.

​​There’s hardly a person on the planet that can’t be tempted to like a good heist film. It’s a tried and true formula that many stories rely on, and oftentimes formulas work for a reason. The methodology employed by these films to create an entertaining spectacle with a diverse set of fun characters is what makes them so endearing. However, the structure isn’t the only element necessary for a successful result. One must take the time to actually craft a narrative that does more than the bare minimum and actually entices an audience to become engaged with the storytelling. Sadly, that landscape is littered with examples that do not leave a memorable impression, and “The Misfits” unfortunately finds itself in that category.

The story opens on the escape of criminal extraordinaire Richard Pence (Pierce Brosnan) from prison right before a corrupt businessman, Shultz (Tim Roth), is about to have him killed. During his evasive travels, he winds up connecting with a rag-tag group of fellow thieves; only they have more altruistic motives. Their plan is to seize a large gold deposit being stored in a Middle Eastern prison owned by Shultz, the purpose of which is to fund a terrorist organization in the region. Though reluctant at first to participate in such a selfless act, Pence is convinced by his daughter Hope (Hermione Corfield) to accept the position eventually. So begins the meticulous planning to pull off a big score while trying to stay one step ahead of the other side.

When one imagines a serviceable director who may not provide the most signature aesthetic but can bring an energetic sensibility to a project, Renny Harlin is one of those names that seems to fit that bill by reputation alone. His filmography has noticeable entries, such as sequels to the “Die Hard” and “A Nightmare on Elm Street” franchises. However, there are also plenty of duds, particularly in the last two decades. Here, Harlin’s efforts to inject a slick style feel incredibly forced and hollow. The irreverent tone that centers around these oddball personas are not captivating in the slightest, notably as it lacks any inventiveness to make it unique. So much here verges on parody, but the filmmaking does not hint at such indulgence to make that kind of self-awareness intentional. What ensues is an assortment of bland set pieces and a laborious pace.

The screenplay by Kurt Wimmer and Robert Henny offers no favors of its own either. The plot’s introduction feels unnecessarily convoluted and is filled with so many familiar beats of past heist films. The collection of characters on this team are given backstories that are completely forgettable and lead to the usage of idiosyncratic quirks that are painfully unfunny. Given the territory of the genre, there are some uninspired twists that do not make one interested in any outcome. The lack of intriguing characters, the stale humor, and the multiple lines of dialogue that flirt with Islamophobia for cheap laughs make the writing a dull exercise. The story wants to color the world with a delightful energy, but those endeavors are unfulfilled and creatively inept.

For what it’s worth, Brosnan does manage to tap into the suave persona he utilized so well in the roles of James Bond and in “The Thomas Crown Affair.” He’s still not providing an all-out great performance and does not look all that engaged, but his natural charisma is at least marginally compelling. Unfortunately, he shares no chemistry with Corfield, though she has a role that makes little impact and hinders her ability to impress. The team also includes the likes of Jamie Chung, Nick Cannon, Rami Jaber, and Mike Angelo, but to call them stock characters would be incredibly generous. All are given the most basic of outlines to their motivations, and their personalities are mostly annoying, especially Cannon giving a grating performance. Not even Roth offers much as the sneering villain, instead choosing to play this role as if he could do this in his sleep. There is a collection of good actors in this cast, but the material certainly does not motivate memorable portrayals.

No doubt that “The Misfits” wants to play in the same arena as other successful heist films, but the fundamental flaw here is that it acts without ever doing the necessary work to build an engrossing tale. The quirky characters are here, but they are all one-dimensional cutouts that leave no impression. The quick one-liners are littered throughout the script, but the comedy is so flat that it cannot be thoroughly enjoyed. The slick style tries to give the tone a spirited quality, but it is incredibly forced and feels like a pale imitation of better-executed films. With performances that barely meet the level of serviceable, the film ends up being a tired and arduous experience that utilizes familiar tropes without ever becoming an entertaining journey. What’s presented is the shell of an enthralling piece with an empty core.