Trailer – “The Eyes Of Tammy Faye” 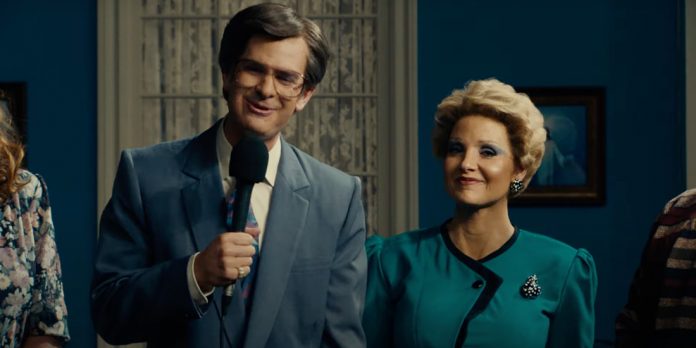 ​
​Plot Synopsis: THE EYES OF TAMMY FAYE is an intimate look at the extraordinary rise, fall and redemption of televangelist Tammy Faye Bakker. In the 1970s and 80s, Tammy Faye and her husband, Jim Bakker, rose from humble beginnings to create the world’s largest religious broadcasting network and theme park, and were revered for their message of love, acceptance and prosperity. Tammy Faye was legendary for her indelible eyelashes, her idiosyncratic singing, and her eagerness to embrace people from all walks of life. However, it wasn’t long before financial improprieties, scheming rivals, and scandal toppled their carefully constructed empire.

What do you all think of the trailer? While this looks to be the biggest film Michael Showalter has given us yet, both in terms of production and Oscar buzz, I’m not so sure I’m sold on this one quite yet. Despite playing real-life people, the accents by both Chastain and Garfield could push this into “Hillbilly Elegy” territory where the acting goes too overboard. Hopefully, that’s not the case, and Showalter can strike the right balance between showing who these two people actually were and how absurd they were as well. Chastain looks far more convincing in the makeup than Garfield does which could also lead to some unintentional distractions. These are all just initial thoughts from the trailer, and perhaps the final product will be better than what I’m initially seeing here. One thing is for sure, though: if the reviews are strong enough, Searchlight will be pushing this biopic for awards consideration. Let the discourse begin! What do you think, though? Let us know your thoughts though in the comments below or on our Twitter account.