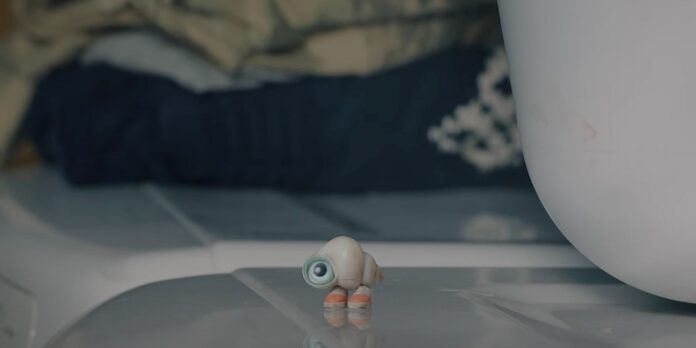 I don’t remember how, but at some point when I was eleven in the summer of 2010, I became aware of a little animated seashell adorned with a googly eye and a pair of tiny shoes on the somewhat new internet platform known as “YouTube.” I couldn’t tell you who first shared the video titled “Marcel The Shell With Shoes On” with me. Still, I do remember my initial mixed emotional reaction, including (but not limited to) delight, joy, euphoria, amusement, dismay, and trepidation. By this point, as a vulnerable young person with fairly unrestricted access to the internet, I had already been exposed to the phenomenon of “strange” YouTube videos aimed to shock and disturb your friends at sleepovers. Surely, this little shell with a funny voice and off-kilter quotations couldn’t be purely well-intentioned.

I’m happy to report that “Marcel The Shell With Shoes On” never fell to these methods of guaranteed virality. Instead, it remained a pleasant, amusing memory from internet-past that would randomly pop into my head from time to time and promptly disappear. Sometimes, if I thought about it for too long, I’d question if I’d imagined Marcel completely. Thankfully, this year A24, Jenny Slate, and director Dean Fleischer-Camp eased any worries I had about the fallibility of my own memory. Like my initial introduction to Marcel, my reaction upon learning that there would be a feature-length film adaptation of this twelve-year-old viral sensation was mixed with some excitement, confusion, and nostalgia. As early positive reactions began to roll in from its world premiere screening at the 2021 Telluride Film Festival, I became increasingly intrigued by this unusual cinematic venture. So, when the film was finally released in the summer of 2022, I bought myself a ticket and sat back to watch a ninety-minute exploration into empathy, family, adventure, and self-acceptance.

The original 2010 video consists of the titular animated shell introducing himself and his unusual living situation in a world designed for humans. The feature film takes this concept and sets it in the highly digital present. The house in which Marcel lives is now an Airbnb with constantly rotating residents. He doesn’t live alone but with his grandma Connie (voiced perfectly by Isabella Rossellini). The film contains a meta-commentary on the personal effects of going viral, as the home’s current tenant, Dean (also the film’s director), shares Marcel’s life on the internet and turns him into a sensation. The film also serves as a touching reflection on the relationship between Fleischer-Camp and Slate, the original creators of Marcel, who were married in 2012 and have since divorced.

If we forget for a moment that the film’s lead is a shell, the story is essentially about a boy searching for his family and caring for his ailing grandmother. With a lovable character at the center of this sentimental, heart-wrenching tale, the film finds that sweet spot in its appeal to audiences of all ages. Far from hiding behind elaborate, hyper-active animation, the film’s true excellence lies in its sensitive handling of heavy themes through delicate storytelling and a well-crafted script. While many are debating its eligibility for Best Animated Feature (we’re 90% sure it will qualify and contend), it’s also a possible candidate for Best Adapted Screenplay at this year’s Oscars.

For a film of this small scale, a nomination in any category at the Oscars would be a triumph. And though improbable, it’s not impossible. The Best Screenplay categories, original or adapted, tend to be one of the more exploratory categories of the awards season. It’s often the only category that honors comedies, such as “Bridesmaids,” both “Borat” films, “In The Loop,” and “My Big Fat Greek Wedding,” etc. The original screenplay category has also been friendly to international films throughout the years, most recently with wins for Bong-joon Ho’s “Parasite,” preceded by Claude Lelouch’s “Un Homme et Une Femme,” Pietro Germi’s “Divorce, Italian Style,” and Pedro Almodóvar’s “Talk to Her.” Further precedence for the category’s unpredictability is the win of Albert Lamorisse’s “The Red Balloon,” a silent, thirty-four-minute short film about a young boy and his magical red balloon navigating childhood bullies and the streets of Paris.

Pixar animation studios have also had a successful history in the screenplay categories beginning with “Toy Story” in 1995 and then consistently contending with “Finding Nemo” in 2003, followed by “The Incredibles,” “Ratatouille,” “Wall-E,” and “Up” all throughout the 2000s. As a sequel, “Toy Story 3” was nominated in the Best Adapted Screenplay category, as was Dreamworks’ “Shrek” back in 2001. In recent years, one of the most surprising nominations in either of these categories was for “Logan,” the (supposedly) final film of Hugh Jackman’s Wolverine, nominated for Best Adapted Screenplay in 2017. Is it too far off to suggest that one of the most wholesome, beloved, and well-adapted films from the small screen to the big screen could crack the Best Adapted Screenplay category? I don’t think so, especially given how thin the field is this year.

Awards prognosticators are constantly reminded of how delightfully unpredictable these categories can be as they recognize some of the best films of the year, even if they miss a Best Picture nomination. With this foundation in mind, a film as loveable and original as “Marcel The Shell With Shoes On” could have just the right ingredients and passion behind it to score a nomination for Best Adapted Screenplay.

Do you think “Marcel The Shell With Shoes On” will receive any Oscar nominations? Have you seen the film yet? If not, you can order the BluRay here through A24. Please let us know your thoughts in the comments section below or on our Twitter account and check out the Next Best Picture team’s latest Oscar predictions here.