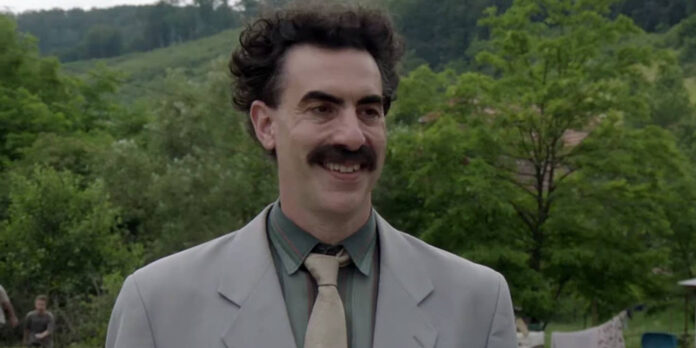 THE STORY – Kazakh funnyman Borat risks life and limb when he returns to America with his young daughter.

Wawaweewa! Borat is back! And you might be wondering, “Very nice. How much?” Arriving on October 23rd on Amazon Prime, Sacha Baron Cohen and his collaborators made “Borat Subsequent Moviefilm: Delivery of Prodigious Bribe to American Regime for Make Benefit Once Glorious Nation of Kazakhstan” (or “Borat Subsequent Moviefilm” for short) in complete secrecy and are now releasing it just in time for the most important Presidential election of our lives. It’s been a very long fourteen years since we last saw the Kazakhstan journalist interact with us Americans and the timing could not be any better for him to make his politically (in)correct and triumphant return.

Since the time of “Borat’s” theatrical release, Borat Sagdiyev (A still absolutely hysterical Sacha Baron Cohen) has become a recognized celebrity all throughout the world. He has been banned from reporting, humiliated by his Kazakhstan government and sentenced to hard labor. When his government realizes that American President Donald Trump is befriending various tyrant world leaders, the Kazakhstan government decides to send Borat back to America to deliver the gift of Johnny the Monkey to President Trump, so the two countries might become allies. The plan changes to deliver the monkey to Vice President Mike Pence instead (the film’s original title was “Borat 2: Great Success and then Borat: Gift of Pornographic Monkey to Vice Premiere Mikhael Pence to Make Benefit Recently Diminished Nation of Kazakhstan”) but then the plan changes even more when Borat realizes that along his journey by sea to America, the monkey has been eaten by his stowaway daughter Tutar Sagdiyev (a phenomenally daring and equally hilarious Maria Bakalova). Now, with no monkey in his possession, Borat elects to offer his daughter as a gift to Mike Pence instead. Donning a series of disguises so no one will recognize him, Borat and his daughter’s journey through America involves a series of during one of the most tumultuous times in the country’s history.

Let’s get the obvious out of the way first: “Borat Subsequent Moviefilm” is not as funny as the original film. How could it ever be? The first “Borat” was so fresh, unexpected and outrageous. The same jokes about anti-semitism, homosexuals, graphic nudity and middle America are all still present. Some jokes from the first film are re-purposed and adapted to our recent times with a new Presidential Administration on the chopping block for Cohen and his writers. But what “Borat Subsequent Moviefilm” does deliver is more creativity in its original concept of a foreign man traveling across America and an even higher progressive-leaning towards pointing out American hypocrisy when it comes to our treatment of women and pretty much anyone that isn’t a heterosexual white male.

This is where Maria Bakalova comes into play. If the Borat character feels at all stale to you, Bakalova’s portrayal of his oppressed daughter is the jolt of energy that this film needed to warrant a sequel outside of the changing American landscape. Without her, the sequel would’ve felt too much like a retread of the first film. But her addition to the narrative not only elevates “Borat Subsequent Moviefilm” almost to the spontaneously hysterical heights of the first film but it also helps it to be more emotionally resonant than its predecessor as well. Borat is highly controlling of Tutar, putting her in a cage at night and walking her around town on a leash, telling her lies about how women cannot own a business or drive a car. Much like how the first film opened up Borat’s eyes to American culture, “Borat Subsequent Moviefilm” allows for Tutar to grow as a character right before our eyes both physically (until she looks completely transformed into a wholly different person by the film’s ending) and mentally, as she embraces female empowerment and discovers her own worth. This movie belongs to Bakalova as much as it does to Cohen, if not more so, and she absolutely knocks it out of the park delivering a comedic performance for the ages.

The humor, satire and shock of “Borat Subsequent Moviefilm” are just as prevalent as they were in the first film, even if we are a bit used to it this time around. When people complain in today’s society how comedians cannot be funny anymore without offending, “Borat Subsequent Moviefilm” is proof that this is simply not the case. The film is indeed offensive and not every joke will land perfectly for all. But the purpose behind each joke is clear. Cohen’s message and the sense of urgency with which he is delivering that message (just a few days before our next Presidential election) makes “Borat Subsequent Moviefilm” unexpectedly one of the most important films of the year. It took the world going to hell for Sacha Baron Cohen to resurrect this character for us and the fact that this film touches not only on the Trump Presidency (frequently called “MacDonald Trump”), the coronavirus, abortion rights, American conservatism, sexual predators and more is a testament to how much Sacha Baron Cohen cares about the well-being of not just America, but of society as a whole.

While I dare not reveal any of the shenanigans that Sacha Baron Cohen gets himself mixed up in this time (see the movie for yourself), all I will say is that there is a truly shocking, “how did they film this?!” moment in the film’s climax that will have news stations going abosolutely nuts this weekend. To that point, “Borat Subsequent Moviefilm” may not have as long of a shelf-life as “Borat” has had since its release in 2006 considering how timely many of the film’s jokes and messages are. But for now, Sacha Baron Cohen and his team of filmmakers can take pride in the fact that they’ve made one of the most important films of 2020. If this doesn’t get America’s youth to get out and vote on November 3rd, then nothing will. “Chenqui!”