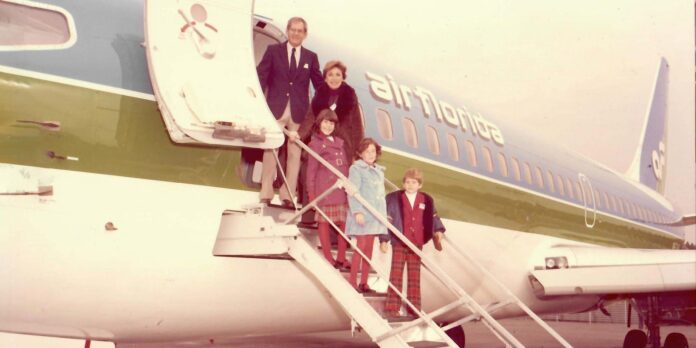 THE STORY – In his final days, we discover Eli Timoner and an extraordinary life of wild achievements, tragic loss and most of all, enduring love. Last Flight Home shares a stunning verité account of a courageous family confronting life and death.

THE CAST – The Timoner Family

After years of pain and ailing health, Eli Timoner, 92, decided in January 2021 that he wanted to end his life on his own terms. He had the law on his side – California’s End of Life Option Act gives mentally and physically capable terminally ill individuals the right to end their lives after a 15-day waiting period – as well as loved ones’ support. Still, it’s a difficult journey for anyone to take. In “Last Flight Home,” his daughter Ondi Timoner aims to make his decision a little less painful for herself, her family members, and the audience, though viewers are more than likely to shed several tears during the runtime.

The director didn’t expect to make a documentary about her father’s final days, but she opens viewers’ eyes to death with dignity, an option that’s legal in only ten jurisdictions in the United States. It’s an uncomfortable subject matter to many – the film makes it clear that some doctors and nurses don’t support it – and even some of Eli’s closest friends and family members question if he really wants to go through with it. But most importantly, Ondi tells the story of a remarkable man who worked hard to take care of his family and loved even harder.

Eli was on top of the world in the 1970s with the success of Air Florida, an airline company that prided itself on low airfares and making it accessible for people to travel. The family – consisting of his wife Lisa and children Ondi, Rachel, and David – enjoyed life to the fullest during those years. But a sudden stroke caused by a massage accident at age 53 changed everything for Eli. The left side of his body was left paralyzed, and health challenges forced him to leave the airline industry. Shortly after, financial troubles struck the family, and debt kept growing.

In these moments, we really learn who Eli was to his core: A man who persevered and tried his best to provide for his family, even when it seemed impossible. And his family rallied behind him — calling themselves the T-team. But those difficult years haunted him until his final days, as he shared that he was ashamed he turned to friends for money or didn’t listen to them when they offered him advice. One of the most touching moments of the documentary is when Eli finally forgives himself and feels free of this burden in his last few days. As his daughter Rachel, a rabbi, poignantly says in the credits, hopefully, it doesn’t take until the end of our days to forgive ourselves for mistakes.

Most of the documentary unfolds in Eli and Lisa’s home, where they have set up his hospital bed in the living room. Once Eli has decided he wants to go through with the end-of-life decision, family members and friends come to visit, or, because this all took place during the height of the COVID-19 pandemic, Zoom and FaceTime with him. Friends and former colleagues reminisce about good times, and loved ones share kisses and sweet words, all while Eli waits for the two-week waiting period to pass, reassuring everyone that he wants this and often asking if everything is on track. Ondi focuses on showing all aspects of this process – each of the doctors’ visits that determine if Eli is a viable candidate, moments of denial among family members, the montage of visits, and, of course when he takes the medicine that will end his life. The way Ondi positions cameras and records conversations make it feel like we’re a fly in the living room observing all of this. But there are times when certain moments feel forced for the cameras like when Ondi tells her mother to sit with Eli and talk with him, only Lisa doesn’t really know what to do, and when she does speak, Ondi tells her she’s doing it wrong. And at one point, Eli tells one of his grandchildren that he doesn’t like to be mic’d up but does it for Ondi, which makes one wonder if he ever really wanted this journey to be documented.

As Eli’s final days approach, the emotional floodgates open. Grandchildren steal the show as they ask him for life advice, and they sometimes find it hard to express their unconditional love for him. Eli’s children also have heartbreaking moments when they realize they will soon no longer be able to speak with their beloved father. The patriarch knows it’s a difficult journey for them all and expresses so much sorrow for his imminent departure, but it’s touching to see the family rally behind him just as they did when he was injured more than 40 years ago.

On March 3, 2021, Eli embarked on a new journey with loved ones by his side. It’s difficult to watch him take the medicine, which he said burned as it went down, but Ondi wants audiences to see the truth. It will make people uncomfortable and most likely emotional, but the best documentaries set out to reveal the good, the bad, and the ugly in this world. In his final hours, Eli’s family showered him with love and messages that would carry him onto the next realm. It’s yet another beautiful and touching moment in the film and one that we can all hope we’re lucky to have when we take our final flight.