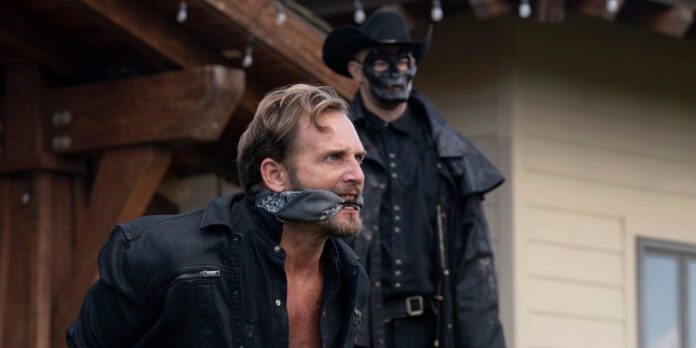 THE STORY – On the run from a drug cartel, a Mexican couple battle vicious thugs who plan to continue the violent tradition of the now-outlawed Purge.

What started as nothing but an ingenious concept for a horror movie back in 2013 has now turned into five feature films and a terrifying commentary on the current state of the country’s current divide politically, economically, and socially. That does not mean that “The Purge” franchise has ever been subtle in its messaging. However, a lot has changed since even the franchise’s previous film, “The First Purge,” in 2018. We saw with our own eyes as violent insurrectionists stormed the U.S. Capitol hoping to “take back” the land that they felt was “stolen” from them. While the latest (and supposedly final) film, “The Forever Purge,” was filmed prior to the events of January 6th, 2021, one cannot watch the film today without that searing event burned into our minds and not have it somehow impact our viewing experience. Whether it enhances or detracts from the experience will be up to the viewer, but one thing is for sure, “The Purge” has never felt more relevant, more horrifying than it does today.

Husband and wife Juan (Tenoch Huerta) and Adela (Ana de la Reguera) are two Mexican immigrants who have fled the Mexican Cartel and found their way into Texas, where they both live simple lives. Juan helps out on the wealthy Tucker family’s farm working with the horses (his introduction to the audience is an over-emphasized zoom in to an extreme closeup hero shot) while Adela works in a restaurant kitchen. Both are living in the U.S. illegally and always with a sense of unease despite their attempts to assimilate themselves into the American culture by befriending others and learning how to speak English. Juan, in particular, is usually having to endure racist remarks and other forms of discrimination from Dylan Tucker (Josh Lucas), the farm’s owner, despite what a great help Juan is to the farm. There is, though, one thing that binds everyone together, and it’s the annual purge. Like every year before it, from 7 pm-7 am, any crime, including murder, is legal. The Tucker family, which consists of Dyan’s pregnant wife, Emma Kate (Cassidy Freeman), his kind father Caleb (Will Patton), and his tough sister Harper (Leven Rambin), all hunker down in their heavily armored and guarded farm while Adela and Juan seek safety elsewhere. They make it through the night…but unlike previous films in the franchise, the story is not over yet. Despite the purge being officially over, many violently deranged individuals have specifically coordinated a continuation of the purge. One night of lashing out isn’t enough anymore. What is now being deemed “The Forever Purge” has taken over the country with no end in sight. Marshall law has been declared, and the NFFA (The New Founding Fathers of America) are trying to contain the violence while Canada and Mexico open their borders for six hours to allow anyone safe passageway to flee the violence that is taking over the country. With the world around them falling into chaos and anarchy, the Tucker family and Juan and Adela must band together and find a way to cross over the Mexican border to safety.

By now, audiences should know what level of filmmaking to expect from “The Purge” franchise. To put it bluntly, it lacks nuance and consistently beats you over the head with its messaging in the most serious manner possible. Characters are reduced to stereotypes instead of given texture and room to grow meaningfully. The actors are forced to say some genuinely juvenile dialogue with the straightest face imaginable. Although its heart is in the right place, “The Forever Purge” takes itself too seriously and, in doing so, reduces a lot of what it’s trying to communicate to the audience to nothing but unintentional laughter. There was a time where the franchise could’ve made a turn towards dark comedy and added some more thoughtful commentary towards its themes, but instead, it has done what “The Forever Purge” continues to do here; inject us with a few cheap jump scares and some brutal violence in hopes that we won’t notice the other flaws plaguing the film. When characters start to discuss what it means to be a “Proud American” or debate over the ideal version of the United States is vs. what it actually is, there is a tremendous opportunity for “The Purge” franchise to become something more than what it’s striving to be. But nope. Provocative and thematically deep conversations on race and different cultures coexisting in today’s America are simply reduced to characters “cutting the shit” thus robbing the film of any emotional staying power.

The scale of “The Forever Purge” is the largest that the franchise has seen yet. There are times where it even feels more like an action film than a horror film in how it’s constructed with hundreds of bullets, lots of explosions, and enough angry white men screaming for a “New America” to make your skin crawl and your stomach turn. “The Forever Purge” even attempts to include a subplot involving Native Americans who previously had this country stolen from them, joining the fight with the main characters. The effort to try and draw a line between America’s brutally bloody past, its brutally bloody present, and its hopefully less brutally bloody future (although franchise creator James DeMonaco makes it clear that he doesn’t believe that will be the case either) is maybe the film’s single best idea? But that’s all this franchise has ever been: a collection of good ideas and questionable execution. It’s been fascinating to see “The Purge” franchise evolve with the times into what it has become today, but this is not the America I want, nor is it the cinema I want, so with this final entry, I think it’s time we purge ourselves of this franchise and start working towards something better.