“my name is pauli murray” 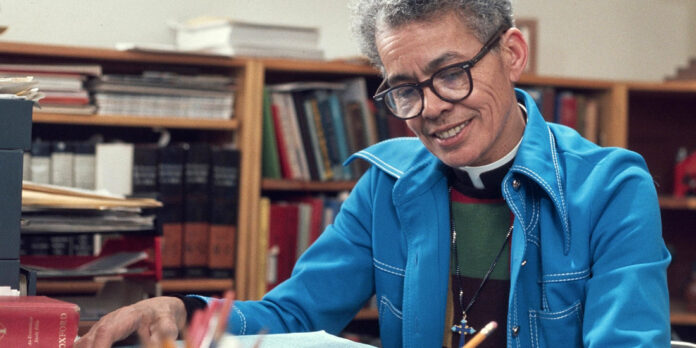 THE STORY – A look at the life and ideas of Pauli Murray, a non-binary Black lawyer, activist and poet who influenced both Ruth Bader Ginsburg and Thurgood Marshall.

To many, the name Pauli Murray may mean very little. Like so many brave and inspiring pioneers, their name has slipped through the pages of the history books. Murray died in 1985 at the age of 74, and in their extraordinary life, they were many things: a human rights activist, a lawyer, a poet, a professor, and an Episcopal priest. Thankfully, the combined efforts of directors Betsy West and Julie Cohen have managed to bring much-needed attention to Murray’s astonishing story. West and Cohen brought a similar level of justice to another significant figure with their 2018 documentary “RBG,” so they are a perfect candidate to tell Murray’s story. There’s so much to Murray’s story that attempting to tell it in one film is a hard task, and West and Cohen certainly have a lot of hard work ahead of themselves. Luckily, with “My Name is Pauli Murray,” they manage to capture the beautiful spirit of Murray and present us with a very moving and powerful documentary which is certainly one of the highlights of 2021 so far.

The directors certainly have an epic task on their hands when it comes to telling Murray’s story to an audience who are relatively unfamiliar with this important historical figure. Upon the death of Murray, their great-niece received their life’s work contained within 141 boxes along with tape recordings, letters of correspondence, and journal entries. Much of Murray’s story is told through their own words, through the use of voice-over narration. However, West and Cohen also interview a range of Murray’s own family members, friends, fellow academics, and some of their surviving students. There are also some fascinating interviews with biographer Rosalind Rosenberg, congresswoman Eleanor Holmes Norton, and Ruth Bader Ginsburg. There is also the use of archival footage and Murray’s personal photographs, which help recreate the America they lived in. Some shots of lynchings and other racist acts are hard-hitting and deeply distressing, but they help remind us of all of the racial injustices that had a stranglehold on America throughout the 20th Century.

It’s not an exaggeration to say that Murray was ahead of their time. They challenged segregation by refusing to move to the back of a bus, which resulted in Murray being arrested, this was years before Rosa Parks did the same thing. Murray didn’t stop there and wrote to President Franklin Roosevelt regarding the racial injustices present in America at the time. Eleanor Roosevelt and Murray became friends as a result, and their work influenced social and political change for both people of color and women as well. The documentary does well to reveal to the viewer how revolutionary Murray was by directly telling us how their actions took place several years before similar historical events. It feels somewhat frustrating that Murray’s life hasn’t been captured on film before this documentary, perhaps because Murray was such a non-conformist with such a lengthy life crammed full of achievements that people struggle to comprehend their significance.

Through this well-crafted documentary, we discover more about Murray’s personality and identity. It is revealed how they wrestled with their own gender, stating that they felt more masculine than feminine and believed that they had been born in the wrong body. Looking through the lens of 2021, we can see how Murray was gender non-conforming or perhaps transgendered. However, in the 1940s, these concepts and terminology did not exist. It’s heartbreaking to hear Murray’s own words as they discuss their inner turmoil and confusion about their identity. The revelations about how they traveled across America dressed in male clothing and adopted a male name show us that Murray wasn’t going to be restrained by the social norms of the day. If only Murray had been able to fully embrace their identity and not been shunned by society. It’s a very moving and interesting section of the documentary, and one wishes that more time had been devoted to the discussion of gender identity.

Trying to cram everything into the 90-minute runtime of “My Name is Pauli Murray” results in the documentary feeling slightly rushed, as we move in breakneck speed while information is thrown at us without giving us the proper time to process it. The short runtime is ultimately what hinders the film’s overall enjoyment, and one can’t be helped wishing there was more. However, the documentary acts as a great introduction to Pauli Murray’s life, and one can only hope that it inspires viewers to go away and conduct their own research into this extraordinary individual. It’s a film that needs to be seen by as many people as possible, so we implore you to spread the word.