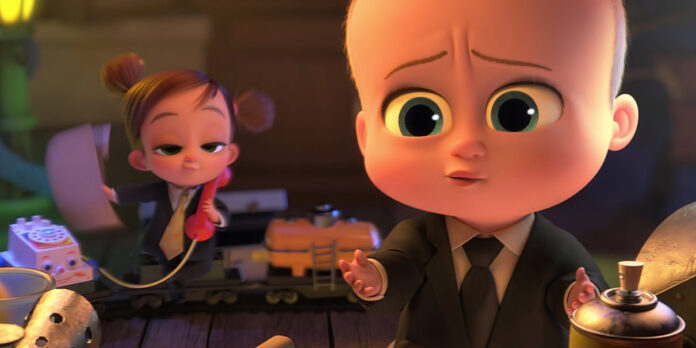 THE STORY – Now adults, Theodore Templeton and his estranged brother take a magical formula that transforms them into babies for 48 hours. Together, they must now go undercover to prevent an evil genius from turning fellow toddlers into monstrous brats.

​​​​​The time has come. The sequel to 2017’s “The Boss Baby” has arrived. Look on thy works, ye infants, and despair. I was one of the many who found the upsettingly Oscar-nominated first film to be obnoxious and even more juvenile than I expected. So I’m surprised to report that I found its follow-up – “The Boss Baby: Family Business” – to be an improvement upon the original. Faint praise, of course, but I at least felt much less second-hand (and sometimes first-hand) embarrassment watching this one than I did the original. It’s still obviously only meant to be enjoyed by the youngest possible audience that could manage to sit still for 100-plus minutes. There’s very little to be found here for anyone with all their adult teeth, but you already knew that.

The lead protagonists of the first film are all grown up. The previously-titular boss baby Ted (Alec Baldwin), is now a high-powered businessman, and his brother Tim (James Marsden) has two kids of his own: the elementary school-aged Tabitha (Ariana Greenblatt) and the infant Tina (Amy Sedaris). Tim is shocked to learn that Tina is a member of Baby Corp, meaning she can think and speak like an adult. She recruits him and Ted in a plot to uncover the sinister truth about Tabitha’s new high-end school. Of course, this requires Ted and Tim to revert back to (conveniently) the ages they were in the first film in order to infiltrate the world of children and, potentially, save the world.

What makes this a marginal improvement for the series is the intelligent decision to divert the film away from the babies-as-adults gimmick that the first movie used. “The Boss Baby” was supported mainly by a foundation of jokes about diapers and pacifiers, which got old after the first dozen or so gags. This film still has them, to be sure, but it’s much more focused on the dynamics of the family as a whole. In particular, it features a father-daughter subplot that’s genuinely sweet. Again, the bar for improvement is low, but “Family Business” clears it.

That being said, it’s still a tiring, primarily unfunny, and shockingly plot-heavy adventure. The jokes come at the audience fast, and while a few visual moments do impress, the dialogue and character-based jokes don’t work. Kids will probably like the comedy, but I doubt they’re the ones reading this. Still, when the film isn’t trying so hard to inspire laughs, there are a few moments of creative visual interpretations of intangible concepts like imagination and music that show that effort was made behind the scenes. For an animated film that isn’t aiming high, that’s an impressive feat.

The voice cast of established actors does their jobs with dutiful effort. Still, there are a few standouts. Sedaris is funny and committed to her frantic grown-up baby performance. And Jeff Goldblum plays the suspicious head of the school with appropriate amusement and scattered energy.

If you found the first “Boss Baby” to be a distressing time at the movies, I doubt you’d be inclined to check out its sequel. And while it truly didn’t make me laugh once, “Family Business” brings more to the conference table than just a host of one-note jokes about newborns.