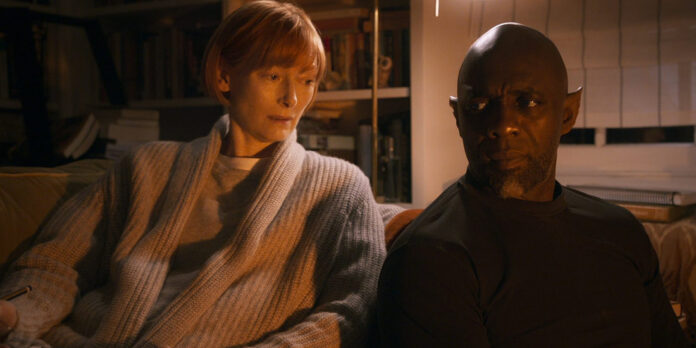 THE STORY – Dr. Alithea Binnie is an academic and a creature of reason. While in Istanbul attending a conference, she encounters a Djinn who offers her three wishes in exchange for his freedom. Eventually, she makes a wish that surprises them both.

​​​It has been seven years since the release of George Miller’s Oscar-winning action masterpiece “Mad Max: Fury Road.” Since then, many have been wondering how the 77-year-old director would follow up the success of his last film. Heading into the Cannes Film Festival, very little was known about his newest film, “Three Thousand Years of Longing,” other than it starred Tilda Swinton and Idris Elba in the leading roles. However, it did not take much to have people intrigued about this project once they discovered the plot and saw the trailer, which showcased yet another ambitious and fantastical vision from the director. With such a high bar to meet, the pressure is on Miller to impress and dazzle once again.

Based on the short story “The Djinn in the Nightingale’s Eye” by A. S. Byatt, “Three Thousand Years of Longing” introduces the audience to Alithea Binnie (Tilda Swinton), an Australian scholar who is content with where she is in life and happy being alone in the world. When trying to clean a mysterious artifact she purchased, she opens it up and comes face-to-face with a Djinn (Idris Elba). The Djinn begins to tell Alithea his life story and how he became trapped in the artifact, revealing to her that the only way to set him free is for her to make three wishes.

The story of a genie granting wishes is a story that has been shared for centuries, most notably with the tale of “Aladdin.” The angle taken with this adaptation highlights the common theme shared across numerous iterations: wishes cause more harm than good. Alithea is very hesitant to make a wish, not only because she is content with her lonely life but also because she knows there will be consequences to anything she wishes for. Such self-awareness provides an excellent message at the center of this story and helps flesh out Alithea as a character throughout her life-changing interactions with Djinn. Swinton and Elba have wonderful chemistry together as the characters develop their relationship in an intimately epic way throughout the film. Both deliver good performances which service the story and their characters despite neither being one of the best either has given.

The craft of the filmmaking is on par with what you would expect from a George Miller production. Composer Tom Holkenborg, who previously worked with Miller on “Mad Max: Fury Road,” has had a fascinating career, and it is easy to see why Miller continues to work with him. The wonderous and dynamic score helps immerse the audience into the different fantasy lands the narrative goes to and embraces the various quirky tones the film strives for. Additionally, the makeup work performed on Elba is well done as it avoids the cartoonish caricatures of other genies, giving him distinguishable enough features from his human form to make him awe-inspiring and other-worldly without losing any of his humanity.

“Three Thousand Years of Longing” clocks in at under two hours, which sounds like it should be the right amount of screen time for a story such as this. However, the pacing turns out to be pretty poor as the narrative is split into two halves. The film’s first half focuses on the Djinn’s backstory and explores the numerous times he was nearly freed. While individually, these stories are well told and intriguing, the repetitive nature of the stories adds little to the narrative we should be caring about most, which is Alithea’s character arc. On a technical level, Miller’s attention to detail and grand visuals are impressive during these sequences. Still, it seems to be where his attention was primarily focused, as the short runtime of these mini-stories makes it challenging to connect with any of the side characters introduced as they take time out of Alithea’s more meaningful story.

There is a harsh contrast between the Djinn’s backstory and reconnecting to the present day, in which Alithea has to decide whether to make a wish which would set the Djinn free. Once the Djinn has finished with his stories, there is very little left in terms of a physical journey for either to go on, and it’s here where Miller’s tone and storytelling seem to take a drastic turn. This section of the film feels slight and isolated as there are no more moments of pure fantasy to overwhelm us visually. Instead, we begin to concentrate on the dialogue and develop the characters. While such a shift should work to provide a cathartic experience for the Djinn, Alithea, and in turn, the audience, such a sharp contrast makes it feel like something is missing in the second half compared to the bombastic first half. So much of the runtime is dedicated to the Djinn’s story that by the time we arrive back at Alithea’s decision on whether or not to set him free, there is little time to allow the impact it has on both her and the Djinn to payoff. The final act feels incredibly rushed, making any possible emotional moments suffer due to not having the time to connect with the characters as we should’ve. Whether the narrative could’ve benefited from one less backstory sequence for the Djinn or more time could’ve been given in the final act to flesh out the relationship between the Djinn and Alithea, something extra was needed to make this sprawling story hit in an emotionally satisfying manner.

On a pure craft level, “Three Thousand Years of Longing” is a robust piece of filmmaking, as George Miller continues to show why he is one of the most engaging directors working to this day. To go from “Babe: Pig In The City” and “Happy Feet” to “Mad Max: Fury Road” and “Three Thousand Years of Longing” is a testament to his mastery of the cinematic art form. Unfortunately, as fascinating as it is, his latest does not fully come together to rank as one of his better efforts. This could’ve been another great movie from Miller, but he spends too long focusing on technical elements and side stories that do not sell the story’s heart. After seven years of longing, at least we don’t have to wait as long for his next film, “Furiosa.”