“THE CONJURING: THE DEVIL MADE ME DO IT” 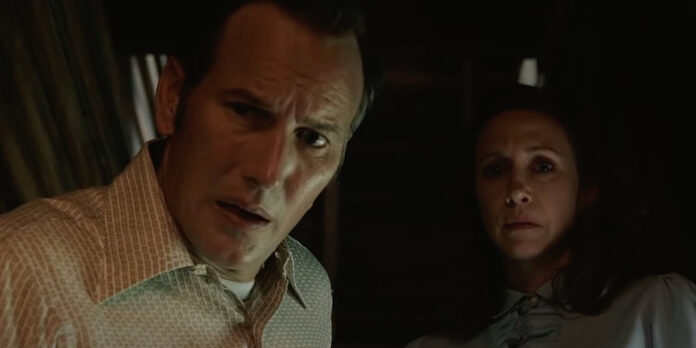 THE STORY – Paranormal investigators Ed and Lorraine Warren take on one of the most sensational cases of their careers after a cop stumbles upon a dazed and bloodied young man walking down the road. Accused of murder, the suspect claims demonic possession as his defense, forcing the Warrens into a supernatural inquiry unlike anything they’ve ever seen before.
​
THE CAST – Vera Farmiga, Patrick Wilson, Ruairi O’Connor, Sarah Catherine Hook & Julian Hilliard
​
THE TEAM – Michael Chaves (Director) & David Leslie Johnson-McGoldrick (Writer)​
​
THE RUNNING TIME – 112 Minutes

Patrick Wilson and Vera Farmiga reprise their roles as paranormal investigators and authors Ed and Lorraine Warren. It’s been a few years since the events of the second film, which saw the couple battle the Enfield poltergeist. The film opens with Ed and Lorraine attempting an exorcism for eight-year-old David Glatzel (Julian Hilliard) with the help of his parents, sister Debbie (Sarah Catherine Hook), and her boyfriend, Arne Johnson (Ruairi O’Connor). It seems to have worked, but of course, things are hardly calm and peaceful for long when David is taken to his bedroom only to be tormented again by something supernatural. To save David, Arne orders the demon to take him instead.

Several months later, things seem to have gone back to normal for the Glatzel family. Arne and Debbie live with their landlord Bruno (Ronnie Gene Blevins), who runs a dog boarding school. Quickly, however, it becomes evident that Arne is being haunted as he begins to see unexplained apparitions, including a foreboding woman in black. In one afternoon, Debbie and Arne’s lives take a tragic turn for the worse when Arne commits a heinous, bloody crime. This scene is expertly directed with brilliant use of a haunting rendition of Blondie’s “Call Me” accompanying the horror unfolding on the screen. (Trust me, you’ll never be able to listen to that song in the same way after watching this film.) Arne is discovered by police walking down the road covered in blood. Nobody reasonably believes his story about being possessed, and it’s up to Ed and Lorraine to find the evidence to prove that the devil made Arne do it.

Although the film claims to be “based on true events,” writer David Leslie Johnson-McGoldrick plays fast and loose with the actual facts of the Arne Johnson case. However, this has been a trend in all of the previous “Conjuring” films, so nothing new here. Instead, we have a lot more character development for Lorraine, and it’s nice to see her character being part of the action while Ed sits in the passenger seat. Ed and Lorraine’s relationship is also developed, and while some may find the romance a bit over-sentimental, it feels necessary for the sake of the drama unfolding in the Warren’s lives. This is a couple who have been together for a long time, and we need there to be some tension and fresh conflict for the story to move forward. The backstory of how the couple first met feels cutesy and cliched, but it works and comes into play at a vital point in the film. As usual, both Wilson and Farmiga are on top form here, and they do great work to keep the viewer invested in both these characters.

While the relationship dynamic of the Warrens is engaging, less can be said for the relationship of Debbie and Arne, which feels underdeveloped and artificial. Both Hook and O’Connor deliver strong performances, but their characters are reduced to just being scared and crying. All secondary characters fall into a similar trap, with the exceptions of John Noble, who is brilliant as an ex-father called Kastner who happens to know all about satanic cults, and the equally brilliant Keith Arthur Bolden, who plays a police detective who is investigating a missing person case that may be related to Arne’s case.

The real reason anyone goes to see “The Conjuring” films is to be spooked. There are scares aplenty here, with perhaps the most terrifying involving a water bed, leaving your heart racing by the end of it. Other scenes are cleverly set up with satisfying jump scares in all the right places, but the horror factor seems more on the gory side rather than building on the overall atmosphere. This may be down to the fact that the film has moved away from the standard “haunted house” set up which we have all become accustomed to. There’s also more violence in this film, emphasizing blood and gore, which may put off the more squeamish viewers. Hopefully, further films in the franchise won’t become like the “Saw” films by making the sequels all about the special effects and gore.

Overall, “The Conjuring: The Devil Made Me Do It” is a satisfying horror entry that dares to try something new and innovative with its narrative structure. It may not prove to be to everyone’s preferred tastes, and some fans of the franchise may wish the Warrens would go back to basics and stay inside those haunted houses battling the demons in the shadows. While the film isn’t quite up to the same standard as James Wan’s previous “Conjuring” films, Chaves manages to show us that the franchise is in safe hands. Let’s hope it continues to try new things and doesn’t resort back to the same cheap tricks.