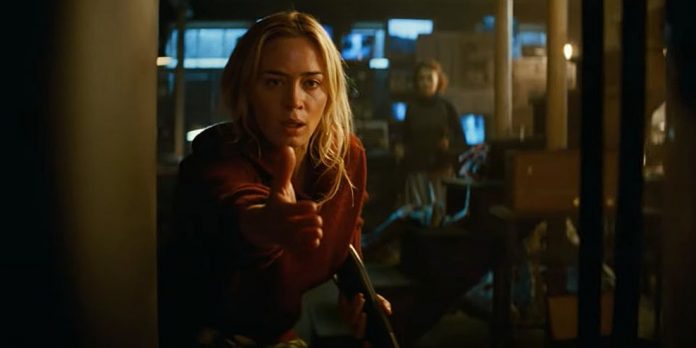 By Ryan C. Showers ​
​
The pandemic hit movie theaters hard. No matter where you lived, theaters were shut down at some point in the past 15 months, and the movie-going experience relied on streaming services. And while streaming proved its power as the new dominant force in exhibition, big studio films and their delays proved the theatrical experience still has life yet to live. Although movie theaters were open and available in some form or another for many people for a long while during the pandemic, the Memorial Day weekend was the first real sense of normalcy at the movies.

My fully vaccinated self saw “A Quiet Place Part II” this weekend. As much as I thrived in watching artful independent films on Netflix, Amazon, and Hulu throughout the Oscar season, being swallowed up in a sea of people all heading into a movie theater is a pretty sensational feeling. In fact, going back to the movie theater yesterday, in many ways, felt as though I had arrived home after a long hiatus.

“A Quiet Place Part II” feels like the ideal vessel for which both mainstream moviegoers and more critical-leaning viewers to be re-introduced to the cinema. Clearly, it has paid off for Paramount, who have seen their film be met with high demand in audience participation and as well as critical enthusiasm. A third chapter in “A Quiet Place” is already being planned. We do not know yet if the penned script by filmmaker Jeff Nichols (“Midnight Special“) is a prequel or the third chapter in this continuing story but we know for sure because of the critical praise and box-office success, it is coming. Even William Friedkin, director of “The Exorcist,” claimed “Cinema is back” in relation to “A Quiet Place Part II.”

The bar of expectations was set high going into “A Quiet Place Part II.” As someone with a warm sensibility for the horror genre, the first film by John Krasinski was like a lightning rod of creative novelty and mogul filmmaking. I found myself in agreement with the heightened praise for the 2018 feature. The solid run during the awards season from guild, industry, and press was inspired for a genre typically tarred as less than. From my perspective, though, the sequel did not quite live up to the “The Godfather Part II” hype that surrounds the discourse. It should not be surprising that those types of takes were an overreaction.

And that leads me to think more deeply about the praise of “A Quiet Place Part II.” Is the reaction genuine, and this will go down in history as one of the greatest sequels of all time, or is part of the reaction superfluous excitement for being back to normal after a year of theater deprivation? There is no doubt that “A Quiet Place Part II” would have received positive marks from critics and won the approval of audiences had there been no pandemic. But are the experiential element of going to a theater again after a year of isolation at home and watching an efficiently made bigger-budget popcorn flick a part of the equation in its top-shelf adulation? In my view, yes.

Undeniably a well-made film that is even expertly directed by Krasinski, “A Quiet Place Part II” is a good sequel. The opening sequence is a stroke of artistic genius as a way to set the stage of the coming events by addressing those which came before even the plot of the first film. However, as much as “A Quiet Place” carved out a space in the horror genre that was uniquely its own, I cannot say I am optimistic about it as a continued franchise, especially if the studio continues greenlighting unnecessary sequels and if this “perfectly planned trilogy” rumor circulating the Internet does not pan out.

“A Quiet Place Part II” is repetitive, and it is hard to blame the movie for this since its mastered signature style – the characters maneuvering through situations as quietly as possible as not to lead to a deadly monster attack – does not lend itself to versatility and growth. The monotony of the recipe began to test my patience, even with the short running time. There are only so many times the same setup can feel fresh, mainly when the plot and character development are so limited by the lack of dialogue/sound and the way the screenplay plays the same notes. Other horror sequels can thrive using the same formula repeatedly because they have new plot and character opportunities to propel through said formula. However, “A Quiet Place Part II” lacked that vital ingredient for me.

As it continues on with future films, “A Quiet Place” may begin to struggle on this front. It indeed held me back from matching the enthusiasm of others. Karasinki’s sequel is a fine outing, but the overwhelming praise is a bit excessive. It is not something revolutionary but rather a very capably made, satisfactory continuation of the story presented three years ago. If the same film had been released twenty years ago, there’s no way it would have over 90% on Rotten Tomatoes. Despite my feelings towards the film, its projected 4-day weekend box-office debut of $58.5 million suggests that theaters are coming back in a big way, making the cinema, after a 15-month hiatus, a quiet place no longer.

Have you seen “A Quiet Place Part II” yet? If so, what did you think? Did you see it in a theater? Let us know in the comments section below or on our Twitter account.