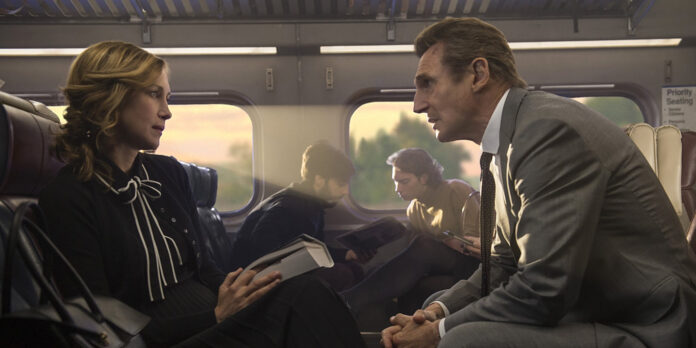 THE STORYInsurance salesman Michael is on his daily commute home, which quickly becomes anything but routine. After being contacted by a mysterious stranger, Michael is forced to uncover the identity of a hidden passenger on the train before the last stop. As he works against the clock to solve the puzzle, he realizes a deadly plan is unfolding, and he is unwittingly caught up in a criminal conspiracy that carries life and death stakes for everyone on the train.

​Now while “The Commuter” might just appear to be “Taken” on a train, simply just because it’s an action film and it stars Liam Neeson, it actually proves to be quite the shock at this time in January. At the beginning, the film feels like nothing more than just our typical January action film release but as the story begins to unravel, there is actually something rather exciting hidden beneath the surface. With some truly riveting pacing, a story that excels with flying colors, and some well-choreographed action sequences, “The Commuter” is an all-around pleasant surprise.

Michael MacCauley (Liam Neeson) is a life insurance salesman in New York City. His wife, Karen (Elizabeth McGovern), drops him off at the train station everyday and he takes the train to his office. After ten years of working for his life insurance company Michael is fired and left to find another job. With bills piling high and his son soon attending college, Michael finds himself in a pinch. Then on his typical commute home, the one he has done every day for the past ten years, a woman named Joanna (Vera Farmiga) sits across from him and gives him a choice. Inside one of the bathrooms on the train is 100,000 dollars in cash and Michael is allowed to take this money, under one circumstance. There is an unfamiliar passenger aboard the train, this passenger possesses a bag that has something that was stolen from Joanna and the people she works for. Michael must find the person and their bag and turn them into Joanna. If he does this, no questions are asked and he walks home 100,000 dollars richer. But as the investigation unwinds, an underbelly of betrayal and deceit unfolds making for one of the more intense stories within an action film in recent memory.

The story is the single most important aspect to “The Commuter.” While the action is fun to watch and is expertly sprinkled throughout the investigation of Michael MacCauley if this film had just another typical action plot line it would be quite boring. But no, the film is methodical in what information it gives away and at what time. We get to feel the agony Michael goes through as he so desperately searches for this bag. Obviously, the story takes quite a few twists and turns that I won’t spoil here but it gets really intense as it builds towards its conclusion, something director Jaume Collet-Serra (“The Shallows“) is no stranger to.

Questions are raised by the thousands it feels like almost no answers are given until the tail end of the third act. As an audience, you are forced to try and puzzle this mystery together in the same manner as Michael and let me tell you, it’s quite a difficult puzzle to sift through. The pacing of the film is stunning as it holds our attention, starting off slow and predictable but then becoming more exciting as it goes. We feel like we have seen this set up a thousand times and it’s because we have. Then before we know it, not even ten minutes into the film, the tables are turned. The film has suddenly been flipped on its head and the audience is left playing catch up, trying to decipher any hidden messages within the exchanges between Michael and the other passengers or even just side conversations between secondary characters.

The story is a whole lot of fun but it does falter in some areas. While it’s told cohesively and with few holes, the screenplay itself is what has some issues. There are a few exchanges that feel completely out of place within the tone the film is trying to set. There are also quite a few lines of dialogue, specifically in the first act, that are just downright silly. The lines of dialogue that make you think “nobody talks this way. This is absurd.” But once you kick that to the curb, sit back and relax, you really get invested into the elusiveness of it all.

The direction of the film, specifically in the action sequences feels incredibly focused. Instead of taking the usual approach with a lot of quick cuts of shots where we cannot even process the information being shown on screen (I’m looking at you “Taken 3”), the action scenes are actually slowed down at times. Or if they aren’t slowed down, the shots are a little on the longer side, or there are just extra shots within the sequence that gives us that boost of information we needed to understand what is happening. Director Jaume Collet-Serra, of “The Shallows” and “The Orphan” fame, really achieves something unique here and continues a solid streak of making above average popcorn fare for audiences.

I will admit, I entered the theater for this film a bit biased. I was not a fan of “The Shallows” and the fact that the film surrounded Liam Neeson on a train didn’t have me shaking in my boots either. But let me tell you, this is one of the freshest and exciting takes on the action genre I’ve seen in some time. It puts the thrilling aspects of its story at the forefront and also lets us enjoy some pretty kickass action sequences. With focused direction from Collet-Serra and a deliberate approach to the story, “The Commuter” proves to not be another throwaway January release.