A Preview Of The 2022 Telluride Film Festival 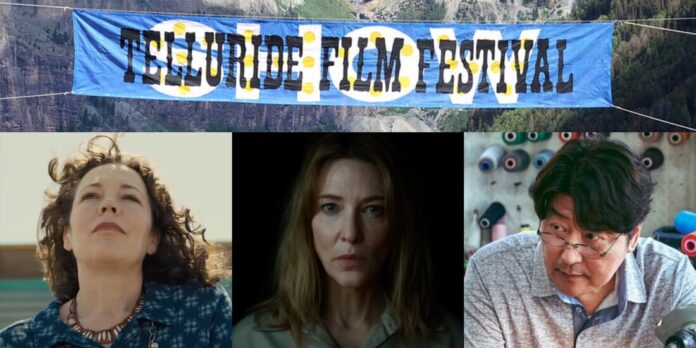 ​Tom O’Brien is over in Venice. Dan Bayer, Nicole Ackman, Nadia Dalimonte and I are getting ready for the Toronto International Film Festival (TIFF). But before then, I will be heading out to the brisk mountains of Telluride in two days for the 49th annual Telluride Film Festival. As has been the case since I started attending in 2019, the festival usually always delivers on its carefully curated selection of films from all over the world, including a few high-profile world premieres, the buzziest titles from the Cannes Film Festival, and more. The catch, though, is that, unlike all other film festivals where we know the lineup ahead of time, Telluride is the only one that keeps us in suspense as to what is playing there until the festival begins. This not only helps to build the anticipation but can also deliver some shocking surprises like last year when “Belfast” had its world premiere at the Colorado mountain festival days before its previously scheduled world premiere at the Toronto International Film Festival (the same thing happened in 2012 when “Argo” had a surprise screening at the festival before TIFF). Will there be any surprise screenings this year? What will I be seeing in two days’ time?

Here are my predictions for what I think will play at the 2022 Telluride Film Festival:

I must admit, when this year’s Venice Film Festival lineup was announced, I was immediately excited at the idea of possibly either “The Son” or “The Whale” making their way over to Telluride. However, due to the scheduling of their world premieres this year, those two will sadly skip the festival and head straight to TIFF afterward, which begins on September 8th. It’s kind of shocking, really, considering they’re two big Oscar contenders (on paper) from distributors Sony Pictures Classics and A24, who always have a strong showing at Telluride. That’s not to say they don’t have any movies screening at the festival this year. On the contrary, A24 will be looking to bring back Lukas Dhont’s “Close” from Cannes, push it further into the Best International Feature Film discussion, and hope to continue the strong buzz for Charlotte Wells’ feature directorial debut “Aftersun.” Meanwhile, Sony Pictures Classics will likely be coming to the festival with Mia Hansen-Love’s “One Fine Morning” and Oliver Hermanus’s “Living,” looking to propel Lea Seydoux and Bill Nighy, respectively, in the Best Actress and Best Actor races.

Typically, the first night of Telluride sees four of the biggest world premieres all playing opposite each other at the Palm, Werner Herzog, Galaxy, and Chuck Jones theaters simultaneously. Last year, it was brutal having to watch everyone decide whether to go see “Cyrano,” “C’mon C’mon,” “King Richard,” or “Belfast,” especially because none of them were last year’s Patron screening (a sneak preview screening for select pass holders before the festival officially begins that evening). That title belonged to the Riz Ahmed starring film “Encounter.” The 2019 year saw “Ford v Ferrari,” “Waves,” “The Aeronauts” and “Judy” (with a tribute to Renee Zellweger) all make their world premieres at the same time with James Mangold’s “Ford v Ferrari” filling in the Patron’s screening slot. So what will be the Patron screening this year, and what will play in those four coveted slots? I have two theories…

Theory number one is there is no surprise screening, no stealing of a film’s world premiere status from either TIFF or the New York Film Festival (NYFF), and no “Oh my god! I cannot believe this is playing here” official kickstart to a film’s awards campaign the same way “12 Years A Slave” received in 2013 when it shocked everyone by premiering early at Telluride. Suppose there is no last-minute additions to the lineup, and everything above goes according to plan. In that case, I suspect the Patron Screening will be Sam Mendes’ “Empire Of Light” (which would be a fine way to get everyone settled into the festival considering the film’s overt love for the cinematic artform as evidenced by the already released teaser) and it will play in the Werner Herzog Theater again afterward. I suspect Sarah Polley’s “Women Talking” will play at the Galaxy, and Sebastián Lelio’s “The Wonder” will premiere at the Chuck Jones theater. This leaves the Palm available for a screening with a tribute (which is always the case on opening night), and I suspect, given its early world premiere at the Venice International Film Festival (today, in fact), it will be Todd Field’s first film in sixteen years, “TÁR,” with the tribute being given to Cate Blanchett. This gives the film’s writer/director and star enough time to screen the film overseas and hop on a plane in time for the Telluride Film Festival on 9/2, with other Venice titles “Bardo” and “Bones And All” coming over each subsequent day, respectively.

But what if…there is a surprise? Now, I want to be very clear that I do not expect this to happen, but one can dream, right? After the Venice Film Festival lineup was announced, artistic director Alberto Barbera gave an interview where he initially expressed regret that they couldn’t program Steven Spielberg’s “The Fabelmans” and that it got away from him because it would be premiering at Telluride (this is also where he let it slip that “TÁR,” “Bardo” and “Bones And All” were all going to Telluride). The interview was posted, and suddenly, everyone was going nuts for this would be yet another major steal from TIFF by Telluride, but probably the biggest one ever, considering a lot of noise has been made over the fact that Spielberg has never had one of his films play at TIFF before. To lose that world premiere status would be a crushing blow for them, and this is why I’m almost 100% confident that there’s no way Universal would ever allow this to happen because then, who knows what future titles of theirs would ever be welcomed at TIFF again? But if it does happen, wow. What an enormous get this would be for this year’s festival, as it would instantly raise the profile of the entire lineup. The interview was quickly edited to say Toronto instead of Telluride so maybe Barbera really did make an honest mistake in his reply, or maybe, just maybe, he spilled the beans for the biggest world premiere of the fall film festival season. I could see a world where “The Fabelmans” surprises as the Patron’s screening at the Herzog, then travels down the street to the Palm later that evening for a Tribute to Spielberg while “Empire Of Light” continues to play at the Herzog, “Women Talking” at the Galaxy and “The Wonder” at Chuck Jones. “TÁR” and “Bardo” would make their way to the festival the next day, with “Bones And All” arriving Sunday.

Some people have speculated that the surprise screening for Telluride will be Damien Chazelle’s hotly anticipated “Babylon,” but considering its massive production budget of $100 million, it would easily be the largest film to ever play at Telluride (even bigger than “Gravity“). For that reason alone, I do not think the festival would make such a move. Chazelle is also delivering a talk at TIFF with Cameron Bailey, where he’ll be showing clips from the movie. Seeing as how the time allotted for this conversation is only 90 minutes and “Babylon” is said to be three hours in length, it doesn’t make any sense that the film would screen at Telluride but then not screen at TIFF. Sorry “La La Land” fans. We’re going to have to wait until December for this one.

Even if Telluride does not schedule a massive world premiere like a “Babylon” or “The Fabelmans,” I’m still beyond excited to see the Venice titles coming over, the world premieres for “Empire Of Light,” “Women Talking,” “The Wonder” and some Cannes Film Festival titles I need to catch up with such as “Aftersun,” “Broker,” “Armageddon Time,” and “Close.” Last year, the festival was a day longer due to the pandemic, and I personally felt the length was absolutely perfect and they should make it the norm moving forward (there are rumors next year’s extra special 50th edition will be longer). Usually, on night one, I can cram in three films (Patron screening, which starts in the afternoon, plus two more), then five each on Saturday and Sunday, and then two on Monday (one before the Labor Day picnic and one after). So, we’re shooting for fifteen films in total. Which fifteen will they be? I won’t know until the official lineup and schedule is announced tomorrow. And who knows? Maybe there will be a mysterious “TBA” listed on the schedule that isn’t something as jaw-dropping as “The Fabelmans” (last year, the TBA slots were for “The Card Counter” and “The French Dispatch“) but will only serve to make my decision-making that much tougher as I set off on what I’m sure will be another unforgettable weekend. I hope everyone gets a chance to come here at least once. It’s definitely expensive. It’s definitely short. But out of all of the film festivals I’ve attended, it’s definitely the most rewarding. I hope you all follow my coverage over the weekend, and I look forward to reporting back on some great movies and how this year’s Oscar race is taking shape.

What do you think will play at this year’s Telluride Film Festival? Are you planning on going? Let’s connect if so! If not, hopefully I’ll see you at TIFF. Please feel free to comment in the comments section below or connect with me on Twitter here. Also, be on the lookout for Next Best Picture’s first Oscar predictions of the season and other big changes coming the same day the Telluride Film Festival announces their lineup on 9/1/22.