“THE ELECTRICAL LIFE OF LOUIS WAIN” 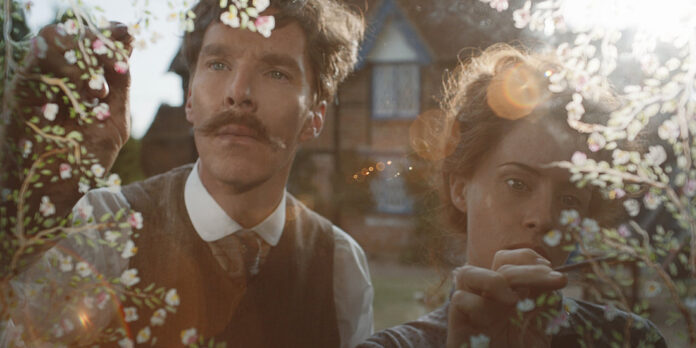 THE STORY – The extraordinary true story of eccentric British artist Louis Wain (Benedict Cumberbatch), whose playful, sometimes even psychedelic pictures helped to transform the public’s perception of cats forever. Moving from the late 1800s through to the 1930s, we follow the incredible adventures of this inspiring, unsung hero, as he seeks to unlock the “electrical” mysteries of the world and, in so doing, to better understand his own life and the profound love he shared with his wife Emily Richardson (Claire Foy).
​
THE CAST – Benedict Cumberbatch, Claire Foy, Andrea Riseborough & Toby Jones​

When you have a figure as eccentric and creative as the artist Louis Wain, you need to make a biopic befitting him, which is where director Will Sharpe’s “The Electrical Life of Louis Wain” succeeds beautifully. This whimsical but melancholy film captures the spirit of the illustrator, who was known for his colorful paintings of animals but suffered from mental health issues later in his life. It’s a unique movie about a very unique man, one which deploys many different filmmaking techniques to match its subject’s idiosyncratic behavior and mindset.

Louis William Wain was an English artist who lived from 1860 to 1939. After his father’s death, he provided for his mother and five sisters and had an ill-fated but happy marriage to his sisters’ governess. He is now remembered for his anthropomorphized cat paintings, through which he helped popularize cats in Great Britain. Cats were often regarded as superstitious creatures until that point, but because of Louis, they became the lovable house pets we adore today. Sadly, despite his success, he spent the last years of his life in mental institutions due to suffering from what some historians believe was schizophrenia.

“The Electrical Life of Louis Wain,” with a screenplay by Sharpe and Simon Stephenson, finds Louis (Benedict Cumberbatch) before he’s discovered drawing cats. He’s an illustrator for a journal working under Sir William Ingram (Toby Jones), an amateur scientist and a boxer, amongst many other things. He is mostly just constantly in motion. His sister Caroline (Andrea Riseborough) has taken over the household in the wake of their father’s death and their mother’s incompetence with their financial situation. When she decides that their other sisters need a governess to educate them, Louis’s life changes forever.

Emily Richardson (Claire Foy) breathes fresh air into an already chaotic household, looking very demure in small wire-rimmed glasses. Just as she’s educating his sisters, she’s teaching Louis how to fall for someone. Their awkward and hesitant flirtations are endearing, and the pair have great chemistry together. Despite his family’s insistence that she’s not well-born enough for him, they are married and start their life together. The period of the film dedicated to Louis and Emily’s love story is very sweet, if at times a bit sentimental, but it works within the playful feeling of the film. It’s also in this period that the couple adopts a cat, and Louis’s interest in drawing them is born.

But tragedy lurks around the corner, thus, shifting the film and its protagonist into a state of melancholy. It depicts how Louis’ youngest sister’s behavior becomes so erratic that the family has her placed in an asylum. Such an event seems to foreshadow the deterioration of his own mental state as his sisters grow more and more concerned for his well-being. Through Sharpe’s well-researched screenplay, visionary direction, and Cumberbatch’s committed performance, we’re given a glance into Louis’s head as he has delusions about the people around him and slowly slips from reality further into the dark corners of his mind.

Who better to play a famous eccentric Englishman than Cumberbatch? While his character is the same sort of highly-cultured intellectual that Alan Turing in “The Imitation Game” is depicted as or his version of Sherlock Holmes in the BBC show “Sherlock,” Cumberbatch is a lot warmer and more friendly. It’s a treat to see Cumberbatch in a role where he’s allowed to be genuinely nice. He’s certainly having a great year between this, “The Courier,” “The Power of the Dog,” the upcoming “Spider-Man: No Way Home,” he’s getting the chance to show off his range as an actor more than ever before. He gives a very moving and emotional performance that ranks up there with his very best. Riseborough and Foy are both excellent as well, though it’s Foy’s Emily who feels like the heart of the movie. Foy is wonderful at imbuing these supportive wife characters with a real sense of personality, even if they appear to be thinly written on the page (see also “First Man“).

“The Electrical Life Of Louis Wain” from top to bottom is exquisitely designed from its costumes to its cinematography. Sharpe utilizes many artistic choices in terms of creative editing, vibrant lighting, and striking framing to give the film its own unique identity to help it stand out above other biopic films. Sharpe allows us to enter Louis’s mind to understand the mental state that he’s in, particularly while he’s creating artwork, and explaining to others how he sees the world. The scenes depicting Louis’s nightmares are particularly well put-together too, adding further trauma and depth to Louis’s character while showcasing more craftsmanship from the sound and visual effects departments. Since the film takes place over several decades, there is also phenomenally seamless makeup work done to age Cumberbatch up, which has a tremendous impact in the third act. The film uses title cards and editing tricks inspired by early silent film techniques, helping to ground it in an earlier time period. While all of these elements are first-rate in their execution, the film’s pacing does struggle, taking a while to get going in the beginning and then losing steam towards the end, which is to be expected when there is some much visual and aural information being transmitted to the audience through the electrical magic that is cinema.

In the film, someone says, “Louis Wain devoted his life to making all our lives happier…and cattier.” This vivid and playful biopic is sure to make audiences happier, despite the serious topics it contends with. The quirky but charming film feels like the correct way to honor an artist like Louis Wain by acknowledging his artistic gifts and recognizing his mental health struggles, making “The Electrical Life Of Louis Wain” a story worth telling.