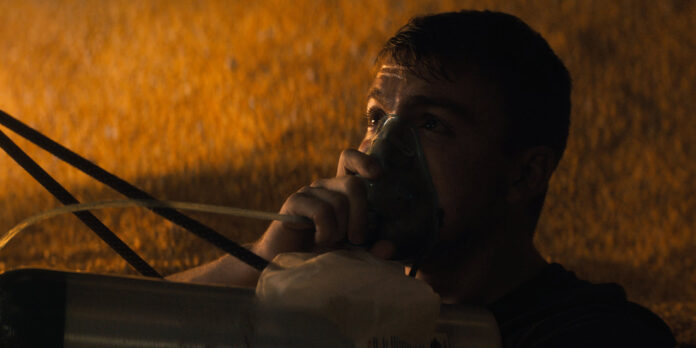 THE STORY – Inspired by true events, SILO follows a harrowing day in an American farm town. Disaster strikes when teenager Cody Rose is entrapped in a 50-foot-tall grain bin. When the corn turns to quicksand, family, neighbors, and first responders must put aside their differences to rescue Cody from drowning in the crop that has sustained their community for generations.

​​​​​​​​​​​Most films that are based on or inspired by a true story are about events that made national headlines, or at least about events that affected the lives of a broad swath of people. But your average human interest news story rarely gets adapted into a feature-length narrative film, and for a good reason. Most of them are too slim to hold the weight of an hour-plus narrative, and many feel like clichés because they are about real average people who have real average foibles. In short, it takes a really special story to earn a film adaptation, and even then, there’s no guarantee that the film will tap into the emotional heart of the drama in a way that feels worthy (sorry, “The 33”). Enter “Silo,” the feature-length directorial debut from Marshall Burnette. While the film claims to be “inspired by true events,” it is not actually based on any one particular story. It is instead inspired by the many real-life horror stories of grain entrapments. On average, one person gets trapped inside a grain silo every fifteen days, and over half end up dying. It’s a scenario replete with the drama that could make for a decent rescue survival flick. Still, the screenplay for “Silo” is so schematic that it feels like Burnette (who receives a “story by” credit) and screenwriter Jason Williamson just took a story word-for-word from a local newspaper and filmed it.

Not that the film is a complete farrago; right from the very beginning, there is a sort of down-home authenticity that feels warm and inviting. While the overly golden-hued cinematography takes things a step or two too far, the production design and performances feel well and genuinely lived-in, as if we are watching an actual farming community deal with a crisis affecting one of their own. That one, in this case, is young Cody (Jack DiFalco), who spends his days working as a farmhand with his best friend Lucha (Danny Ramirez). The farm is run by Junior (Jim Parrack), whose father is in a very advanced stage of dementia. In his poor mental state, Junior’s father pushes a button to eject the corn in one of the farm’s silos just when Cody and older farmhand Sutter (James DeForest Parker) are inside. Both begin to sink with the grain, and before Lucha can get Junior to shut it off, Sutter goes completely under. Cody’s head stays above the grain but has hundreds of pounds of pressure on his torso, pressing in on his asthmatic lungs. Will Junior be able to keep him breathing until help arrives? Will volunteer firefighter and requisite Conflicted Man With A Dark Past Frank (Jeremy Holm) be able to save Cody despite no one believing he’s qualified to do so?

It is apparent very early on what kind of film “Silo” will be, and thus it has to work overtime to keep the audience’s attention. Unfortunately, the film fails at this, leaving character relationships sketchy and failing to build any tension after the accident. That one sequence is appropriately queasy-making, but in every other scene inside the silo, the film’s wide aspect ratio proves ineffective at conveying the claustrophobia of Cody’s predicament. This leaves DiFalco to convey this all on his own, and he struggles to keep from overacting. The screenplay doesn’t help either, failing to adequately establish such basics as exactly what Sutter and Cody are doing in the silo, what the fire department has to do to get Cody out, and what is happening to Cody’s body underneath all that corn. The stakes of Cody’s situation are blurry, but at least it is clear that he is in a life-threatening situation that he needs to be rescued from quickly. Everything involving Frank is maddening. There are allusions to him being an alcoholic and being indirectly involved with a tragic event, but what that event was remains shrouded in mystery for far too long and doesn’t seem to have any connection to the themes the film is working with. Frank’s entire backstory exists only to inject some conflict into the proceedings and to give Holm something to do, and it very much feels that way – instead of adding depth, it comes across as a contrivance.

For all that doesn’t work about “Silo,” however, it does earn some goodwill for one reason. The film never even attempts to make the silo and the corn inside it a metaphor in order to make some larger comment about society, as many “true life” films named after the story’s location or Macguffin tend to do. The film is admirably straightforward in a way that feels absolutely right for these characters. Unfortunately, “Silo” still feels underdeveloped in its straightforwardness, rendering a simple story sadly stillborn.