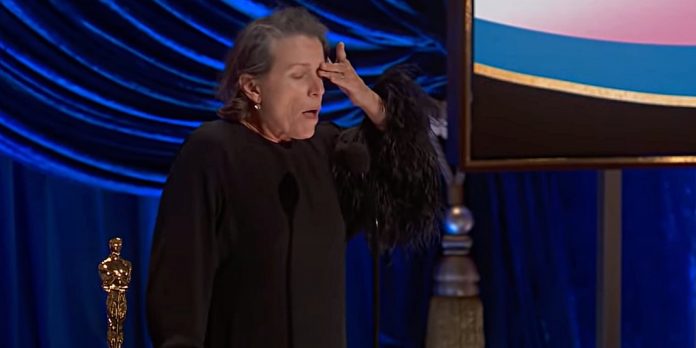 We survived an Oscar season where trying to crack the code in predicting Best Actress was akin to solving a Rubik’s cube. Every time you found a solid trail of logic and thought you were getting on the right path, your working theory was undercut by the competing ways to compellingly examine who of the five contenders would rise above for the win. It was a rare year where four of the five nominees essentially had an equal shot at the gold. Therefore, last Sunday, when Best Picture seemed locked and loaded for “Nomadland,” Best Actress appeared to be the main event. But the result is less climatic in execution than in the prior discourse and buildup.

If you had told me that Frances McDormand would ultimately prevail for her third Best Actress win for “Nomadland,” it would have been more surprising than a triumph for Viola Davis in “Ma Rainey’s Black Bottom” or Carey Mulligan for “Promising Young Woman.” Davis and Mulligan had a more robust bank of fans and narratives. Their wins would have been more unique (in Mulligan’s case) and historic (in Davis’s case) than McDormand’s reflective, internal work in the Best Picture winner. McDormand’s characterization of Fern in “Nomadland” is flawless. It has merit and every right to be honored as a winning performance. Additionally, McDormand is one of the finest actors in the business and deserves to be a three-time Academy Award winner for her acting efforts.

McDormand winning was perhaps a calm way to end this tumultuous race for Best Actress. There were no fireworks, but rather, a general sense of consensus, detached serenity, and acceptance. I can’t imagine that there is a large number of people who dislike this performance. It shoots straight and is very successful, even if it’s less exciting than the others. McDormand winning is the safest way to conclude this race; it almost feels like the Best Actress result was decided using the preferential ballot. This general sense in the air could perhaps be set by McDormand herself when she accepted the award. After speaking during the film’s Best Picture winner acceptance shortly before, she kept the Best Actress speech brief, relaxed, and humble. It was as though she melted all of the passion from supporters of Mulligan, Davis, Day, and Kirby and turned the page to the future.

Many of us didn’t predict this category correctly because the type of quiet and subtle acting in McDormand’s “Nomadland” performance rarely wins Best Actress – and the fact that people who have three acting Oscars, let alone three awards in Lead, are rare. It seemed like a stretch. However, McDormand proved she has the reverence and range to join that highest echelon of the Academy with this win. She now has four Oscars to her name: Best Actress for “Fargo,” “Three Billboards Outside Ebbing, Missouri,” and “Nomadland” (as well as a Best Picture Oscar for producing the latter).

The lane I took in predicting Best Actress involved believing the SAG winner would be weighed more heavily in a fractured year where no contender won more than one televised precursor award. Perhaps this theory would have panned out if “Ma Rainey’s Black Bottom” had been released closer to the Oscar ceremony (for instance, “Nomadland” and “The Father” undeniably benefited from wider releases in February) and had more passion within the Academy. In retrospect, the lack of Best Picture and Best Adapted Screenplay nominations most likely did ultimately undercut Viola Davis’s chances at a historic win in Best Actress (and Chadwick Boseman’s chances at a posthumous win in Best Actor). And as much as Carey Mulligan’s work is the boldest and most creative of the category; perhaps she was doomed after losing both the Golden Globe and SAG awards, despite “Promising Young Woman” achieving a Best Picture nomination.

Sometimes this rule doesn’t work. Sally Hawkins didn’t win Best Actress for “The Shape of Water,” neither did Kate Winslet for “Titanic.” It’s a rule that’s more informative than strict. Without her film winning Best Director, Gwyneth Paltrow just made the finish line for “Shakespeare in Love,” but Renée Zellweger just missed it for “Chicago.” But in such a fragmented year for Best Actress, McDormand winning Best Actress for the Best Picture-winning film should have been more apparent. After all, she is in every single scene of “Nomadland” and really worked as a partner to Best Director winner Chloé Zhao in bringing to life her vision. The reason we need to be more cognizant of this – predicting Best Picture and Best Actress to overlap – is because the future feels optimistic about having more Best Picture and Best Director winners with female main characters. We will likely confront this exact situation sooner rather than later.

Who did you originally pick to win Best Actress before the Oscars aired? Were you surprised that McDormand won? Do you think she will pick up a fourth acting win, thus tying Katharine Hepburn as the most awarded Oscar acting winner of all time? Let us know in the comments section below or on our Twitter account and be sure to check out our latest predictions here.