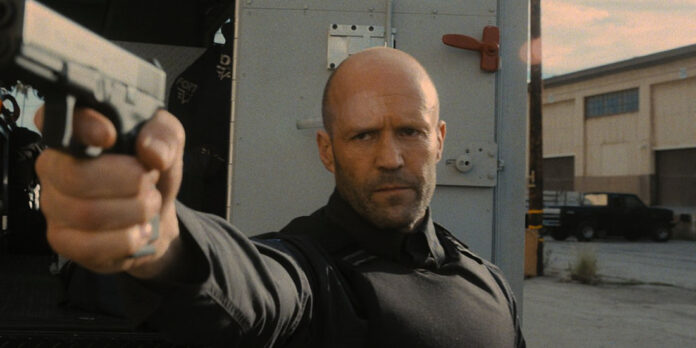 THE STORY – Mysterious and wild-eyed, a new security guard for a cash truck surprises his co-workers when he unleashes precision skills during a heist. The crew is left wondering who he is and where he came from. Soon, the marksman’s ultimate motive becomes clear as he takes dramatic and irrevocable steps to settle a score.​

To be frank, Jason Statham starring in some sort of heist film with a generic title doesn’t exactly inspire confidence, even with director Guy Ritchie (“The Gentlemen” & “Snatch”) at the helm. Perhaps it’s exactly because of these low expectations that “Wrath of Man” was able to surprise me so much. Don’t get me wrong, it’s still a story you’ve seen before, but thanks to Ritchie’s solid direction and some creative storytelling choices, “Wrath of Man” is a dark revenge thriller that really works.

Statham stars as H; a mysterious driver hired on to an armored security vehicle company after they’ve experienced a robbery that left two drivers killed. He’s quiet and never very forthcoming about his personal life, making the other drivers immediately suspicious. Before long, H stops an attempted robbery, taking out the thieves with shocking precision. As his fellow drivers, including Bullet (Holt McCallany) and Boy Sweat Dave (Josh Harnett), get more and more suspicious, we start to learn more about what truly led H to join the team.

One of the more surprising aspects of “Wrath of Man” is how it’s able to take an uninspired story and make it feel fresh and unexpected. The movie unfolds non-chronologically, revealing the story one piece at a time. Rather than feeling like a gimmick, it builds suspense and anticipation as the audience discovers what is driving H. Utilizing both chapter titles and time stamps initially felt like overkill but, they help keep the story clear despite seeing events from different perspectives. “Wrath of Man” has the look and feel of something we’ve seen a million times, but it manages to unfold with such confidence and darkness that both elevate the experience.

With such a stylistic director at the helm, one might be surprised at the overall lack of directorial flair through the movie, but it’s Ritchie’s restraint that really makes the difference here. “Wrath of Man” knows exactly what movie it wants to be. It’s not trying to throw in jokes to be an action-comedy. It’s not trying to start a franchise. This is a dark as hell revenge thriller. Period. The film feels like it has a singular focus, which is why too many stylistic flourishes might’ve felt out of place. Instead, Ritchie’s typical frenetic pace is replaced by a slow, confident hand that guides the viewers through the story.

So much of my viewing experience was me wanting to roll my eyes at something generic but then being pulled back in by the exciting story. There are many reasons why I shouldn’t like this movie. It has your goofy genre staples, like plenty of cheesy tough-guy lines and H somehow surviving getting shot at least a dozen times. It also has the charismatic black hole that is Scott Eastwood. And at the end of the day, the plot itself is bland. If I were to retread the entire story here in print, it wouldn’t sound very interesting at all. But it’s how this story is executed that kept me intrigued despite all the things that should turn me off. Something about the dark, focused approach keeps everything grounded in a unique and unexpected way.

Reuniting Statham with Ritchie after 15 years was clearly a smart move for them both. Statham’s casting is precisely what made me approach this film with such low expectations since he’s made so many similar films to mediocre results over the years. While “Wrath of Man” likely won’t turn any new chapters in either of their careers, this is a pleasant surprise. Head into this film with low expectations, and you might just be caught off guard.