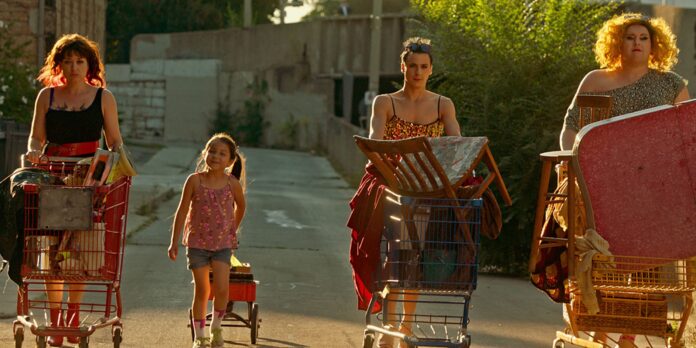 THE STORY – Rosie (Keris Hope Hill) is a visibly Indigenous, English-speaking, sweet, and headstrong little girl and her mother has just died. A children’s services agent brings her to her only living relative, her Francophone aunt Frédèrique (Mélanie Bray). “Fred” doesn’t have a solid foundation on which to raise a child. She is unprepared — she’s working at an adult entertainment shop and threatened with eviction — and is at first unwilling to take on caring for her adopted sister’s young daughter.

Among a festival populated by big names and high-profile titles, Canadian films feel more and more like hidden gems. Watching a film made so close to home, especially one as vibrant and energetic as Gail Maurice’s “Rosie,” is a heartwarming sensation. In her feature debut, the Métis writer-director tells a bilingual story of chosen families set in 1980s Montreal.

Home is defined not by places but by people, such as Frédèrique (Mélanie Bray), a Francophone street-smart artist who makes hard-to-sell paintings and is on the verge of being evicted. When met with a young Indigenous girl named Rosie (Keris Hope Hill), the daughter of Frédèrique’s deceased sister, Frédèrique (known more commonly as Fred) reluctantly becomes the girl’s guardian. With support from friends Flo (Constant Bernard) and Mo (Alex Trahan), the group steers through the responsibilities of being present for Rosie. There’s no rulebook on how best to go about this, a sentiment the film reflects vividly. “Rosie” is at its most memorable during moments of spontaneity, when the story feels fluid and unpredictable. But the majority of the characters are overwritten and stilted, creating a challenge to connect with the film’s openheartedness beyond a surface level. While consisting of resonating themes and quirky energy with colorful ’80s influence, Maurice’s sweet slice-of-life story plays it safe as a standard coming-of-age comedy-drama.

Adapted from Maurice’s 2018 short film of the same name, “Rosie” balances focus between the perspectives of Fred and Rosie as their lives intersect on the fringes of Montreal. Fred is initially against the idea of taking care of Rosie – without a stable foundation to provide for herself, let alone a child, the child services agent assigned to the case is met with fervent reluctance. But when the agent explains that Rosie would otherwise be placed back into foster care, this sparks Fred’s interest in protecting Rosie from a broken system. Through conversations between Fred and social services, the film makes underlying references to experiences of The Sixties Scoop – a period in which Canadian policies permitted Indigenous children to be “scooped” from their homes, placed into foster care, and adopted by white families. Fred’s impassioned dialogue – talking of children being ripped from their parents and placed into empty homes with empty souls – strongly conveys the character’s motivation. Fred is still a picture of conflict – a scene of her leaving Rosie at a park with a stranger is a striking example of her reluctance. But over the course of the film, Rosie’s influence on Fred’s life blossoms, opening up the possibility of togetherness as a family unit.

“Rosie” is framed around the titular character’s impact on the lives of others, which is both joyous and bittersweet in equal measure. Keris Hope Hill’s performance as Rosie brings adorable, vibrant energy to the film. Her character also acts as a reminder of the many children whose identities were lost during the Sixties Scoop period and beyond. Identity and alienation, expressed through the characters, are prominent themes. An English-speaking Rosie adapting to a French-speaking community and meeting a Cree man (Brandon Oakes) with whom she forms a bond further shows how the filmmaker expresses the power of identity through this character. Rosie’s connection with the Cree man stands out, conveying how she regains her Indigenous identity piece by piece. Telling the story with a child’s perspective in mind gives the film a sense of wonder, innocence, and openness. Maurice’s screenplay brings an unfiltered approach to the characters and story. But in the attempted balance between Rosie’s perspective and Fred’s, there is a missed opportunity in getting to know more about the titular character herself, beyond how she is viewed in relation to other people in the film.

While “Rosie” is a mostly sweet experience to take in, the screenplay often plays it safe with the storytelling. Given the subject matter and themes at play, not digging deeper leaves a lot to be desired. Maurice relies heavily on surface-level personality traits to define the characters. As a consequence, the film explores them from a distance. The actors bring enough presence to make up for gaps, though some of the performances feel stilted in moments of heightened drama. Among the adult cast, Mélanie Bray shines brightest as Fred. She brings a rebellious spark to this character and makes Fred’s predicament feel utterly believable. Bray’s lived-in work reaches impressive moments in the scenes of Fred engaging with social services. Constance Bernard and Alex Trahan give fine performances, but both are let down by writing that half-engages in their backstories without delving much into who these characters are.

While the character development is lacking, “Rosie” does a sweet job of creating community-driven energy that warms your heart. The colorful cinematography and 1980s setting make you feel part of this world, as though you’re walking along the streets with the characters and being welcomed into their chosen family. It is not hard to miss Maurice’s love and affection for telling this story, bringing a fresh perspective to the screen. Themes of family and rebellion, identity and resilience, are handled superficially at times. Despite a surface-level approach, “Rosie” has a big heart and remains to be a delight to watch.

<b>THE GOOD - </b>Filmmaker Gail Maurice brings sensitivity and a big heart to a story that needs to be told.<br><br> <b>THE BAD - </b>Untapped potential in exploring the characters and themes on a deeper level leaves a lot to be desired.<br><br> <b>THE OSCAR PROSPECTS - </b>None<br><br> <b>THE FINAL SCORE - </b>6/10<br><br>"ROSIE"