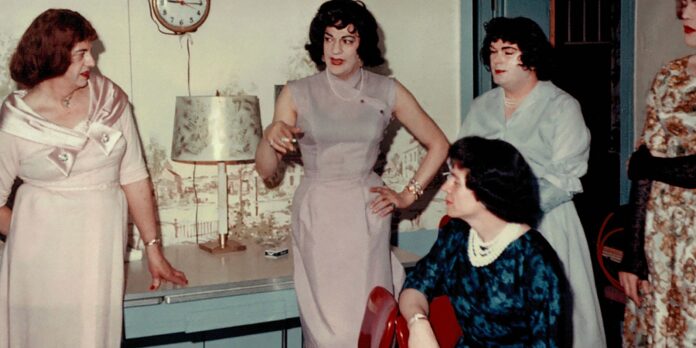 THE STORY – Beginning in the late 1950s, a clandestine network of cross-dressers began making a pilgrimage to New York’s Catskills, where they found a sense of belonging in a large Victorian-style house known as Casa Susanna. The gatherings, hosted by Susanna (also known as Tito), lasted into the 1960s. The legacy of this community remained hidden until recent years, when different clues to its existence inspired a book of vintage photographs and a play by Harvey Fierstein.

Historical lessons often focus on famed individuals to define a moment in time. Recognizable names and faces fill bookshelves as subjects of the world’s most influential figures. But what about those without fame? What about subjects of anonymity? The discovery of everyday people who made a difference and lived in secrecy can be a challenge, even more so when searching through years of forgotten queer history to reclaim influential figures. Think about all the lost stories that you may never learn about in your lifetime, stories that exist only in people’s hearts and souls. Documentaries can be a powerful tool to educate new generations when it comes to shining a light on what’s been buried for decades. When considering the frequent erasure of queer history, the existence of Sébastien Lifshitz’s documentary film “Casa Susanna” feels especially precious.

In the 1950s and 1960s, a secluded scenic house in southeastern New York became a safe haven. Nestled in the Catskill Mountains was a retreat for cross-dressing heterosexual men and transgender women. Known as Casa Susanna, the retreat protected guests’ exploration of identity and self-expression. They lived as women for uninterrupted periods during a time when it was unsafe and illegal to do so. For decades Casa Susanna and its significant influence on people’s lives had been forgotten until a collection of candid photographs were discovered at a flea market in the early 2000s. Director Liftshitz explores stories of the house and its many guests, some of whom appear as interviewees in the film (as well as in the candid photos). Made of archival footage, colorful snapshots, and former guests’ memories, “Casa Susanna” rebuilds forgotten experiences and reclaims space in queer history.

Casa Susanna was run by the late Susanna Valenti, a married father (known as Tito Arriagada) who found liberation and identity in cross-dressing. The house was owned by Susanna’s wife, Marie Tonell, a Manhattan wig shop owner who would sometimes drive her to the Catskills for weekend get-togethers. Many guests learned about the house through word-of-mouth and a magazine called “Transvestia,” in which Susanna had a column for the cross-dressing and trans-women community. The house was a safe space where people could express themselves without outside intrusion, and Lifshitz’s direction adopts the same sentiment in the film. The interview subjects are former Casa Susanna guests and relatives of Susanna and Marie (speaking to the couple’s love story). Lifshitz sits with his subjects longingly, giving them time and space for complex recollections to define themselves. “Casa Susanna” is interview-heavy. While interesting commentary comes from it, the film tends to move in long-winded circles floating from one subject to another. Applying an interview-driven approach can be limiting in terms of intersectionality and who is included in rebuilding history.

“Casa Susanna” opens with former guest Katherine Cummings (originally from Australia) visiting the property for the first time in years. Katherine becomes the audience’s guide as she recalls her memories and paints a portrait of what Casa Susanna was like. To hear her witty commentary juxtaposed with present-day footage of an abandoned house gives remarkable perspective. This wasn’t just a house but a life-changing haven for people who traveled from around the world to be part of a community. Katherine relates the glory days of Casa Susanna in such rich detail that one feels truly transported to a time so warmly restored. As the film progresses, a few more interviewees, such as former guest Diana Merry-Shapiro, are introduced along the way. Diana, who used to be a research scientist for Xerox, transitioned after spending time at Casa Susanna. Her commentary on the experience is one of the film’s most moving moments. Eventually, the interviewees reunite at the place that brought them all together. The journey to that reunion is a good showcase for editor Tina Baz, who connects their shared experiences delicately to reach a moment of emotional release.

The stories of Casa Susanna are also told through candid color photographs. Photography plays a powerful role in expressing identity, vulnerability, and joy. Given how much of Casa Susanna had been buried over time, the existence of these photographs is a treasure. Among many activities, the photos show guests sitting at a dinner table, celebrating holidays, playing board games, posing for the camera, and taking pictures of one another. One of the most emotionally resonating parts of the film is watching the interviewees react to various photographs of themselves. It’s a lovely reawakening of a beautiful moment in time when acceptance was cherished and protected. It’s a stunning illustration of them seeing themselves free, outside of what realities they lived beyond Casa Susanna.

Told through powerful mediums of storytelling, “Casa Susanna” traces the lives of cross-dressers and trans women who got together secretly in order to live openly. The secluded scenic house in the Catskills was a place where they could simply enjoy each other’s company. With generous interview subjects and never-before-seen archival footage, memories are rekindled. As interviewees describe what it felt like to be at Casa Susanna and how this community changed their lives, they are building an important narrative for the history books. While the lack of a consistent core subject puts the film a little out of focus, “Casa Susanna” excels at inviting you to understand a chapter of time through some of the everyday people who lived through it.

"CASA SUSANNA"<b>THE GOOD - </b>Emotional interviews and impactful use of photography help rebuild the forgotten experiences of Casa Susanna, a safe haven for self-expression.<br><br> <b>THE BAD - </b>The lack of a consistent core subject puts this documentary a little out of focus, and the interview-driven approach can be limiting.<br><br> <b>THE OSCAR PROSPECTS - </b>None<br><br> <b>THE FINAL SCORE - </b>8/10<br><br>