Reacting To The Madness That Was The 93rd Academy Awards 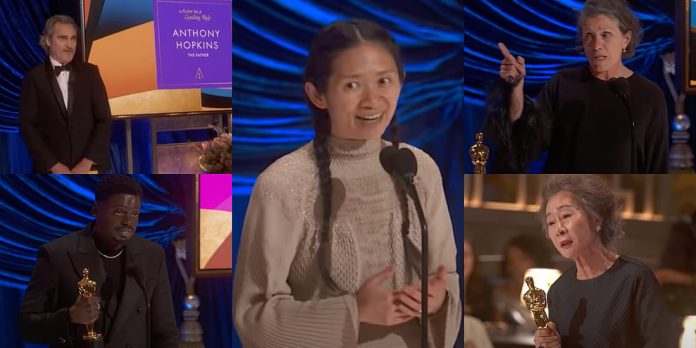 After the most extended Oscar season in 79 years, a new Best Picture was finally crowned as “Nomadland” took the top prize of the night. Or rather, it took the third-to-last award of the night. It was a historic evening in so many ways, good and bad, so let’s dive into the highs, lows, and records of the insane 93rd Academy Awards.​

​LEAD ACTING CATEGORIES ANNOUNCED LAST
In an inexplicable lapse of common sense, the entire presentation of the show was restructured to place Best Actress and Best Actor as the final two categories of the night. There is no other explanation for this switch other than the producers banking on the late Chadwick Boseman winning Best Actor for his performance in “Ma Rainey’s Black Bottom,” which would’ve closed the show on an emotional note.

Of course, this moment didn’t happen. Instead, the show was robbed of all power by presenting Best Director incredibly early in the show and quickly rushing through the presentation of Best Picture before announcing Best Actor and Actress. Worst of all, Anthony Hopkins wasn’t even present to accept his award for his towering performance in “The Father,” ending the show with an awkward photo of the winner and an abrupt cut to Questlove to close things out. Not only did Boseman lose, so did viewers and lovers of the Oscars.

It’s honestly a shameful and embarrassing moment for the Academy. For starters, it sullies Hopkins’ deserving win. He made history tonight as the oldest acting winner in any category. It’s a magnificent performance and a perfectly good winner, but because they built the ceremony around the entire idea of Hopkins NOT winning, it almost paints his win as the very thing that ruined the ceremony. While it’s tragic that Boseman lost, it wouldn’t have hurt as much if the producers hadn’t rearranged the ceremony for him to do so. The producers are solely to blame for this very obviously poor and misguided idea, leaving us with a harsh lesson for all-time: always present Best Picture last.

Furthermore, “Nomadland’s” Best Picture win didn’t feel appropriately celebrated because the show needed to move on to the next award. It was so sad and odd that we didn’t get to bask in the moment of our newly crowned victor, the highest achievement in cinema.

While the “Moonlight” and “La La Land” debacle was embarrassing, at least it was a legitimate accident. This entire mess was pre-planned and coordinated, and it backfired in the worst possible way. It’s not hyperbole to say that this will go down as one of the worst moments in the Academy Awards history. And I want to reiterate again, neither Anthony Hopkins nor the voters who voted for him should feel ashamed by this. Such a colossal failure rests on the shoulders of those who took a big risk and lost it all.

NOMADLAND WINS BEST PICTURE
It even makes me angry that I’m not discussing the Best Picture win as the first item in this piece.

But yes, setting aside from the horrific ending to the ceremony, we must celebrate the many good things about this year’s awards, starting with the phenomenal Best Picture win for “Nomadland.” Rarely do we get such an understated, contemplative, and human film, winning cinema’s top prize. Furthermore, it’s only the second female-directed film to win Best Picture. Though the Academy arguably hit a bit of a speed bump in Best Picture with the “Green Book” win in 2018, we seem to be spoiled for riches in recent years with “Moonlight,” “The Shape of Water,” “Parasite,” and “Nomadland” winning the award. This is a win undoubtedly worthy of celebrating.

Of course, we can’t ignore the groundbreaking director behind the film: Chloé Zhao. Though it was a foregone conclusion months ago, let’s not gloss over the fact that Zhao is only the second female, third Asian, and first woman of color to win Best Director. This is a historic achievement from one of the most exciting filmmakers out there. If only the show had adequately celebrated this achievement and given it its proper due.

With the Best Picture and Actress win for “Nomadland,” Frances McDormand became the first woman to win Oscars for acting and producing. Following the Best Picture announcement, McDormand triumphed in the much-debated Best Actress category that saw all of the nominees except one receive a single significant prize prior to the Oscars. Laurence Olivier also won Best Actor and Best Picture for “Hamlet” in 1948, but Best Picture was awarded to the studio, not individuals, until 1951.

Without a doubt, this was one of the hardest categories to predict at this year’s awards, but McDormand scored her third Best Actress trophy. Only Katherine Hepburn has more Best Actress wins, with four. Even legends like Meryl Streep and Jack Nicholson, who also have three acting Oscars, won one award in the Supporting category. Such a feat means McDormand will go down as one of the greats, and she’s not even done yet.

DANIEL KALUUYA AND YUH-JUNG YOUN MAKE HISTORY
After bursting onto the scene just four years ago in the surprising Oscar-winning film “Get Out,” Daniel Kaluuya is now an Oscar winner for his portrayal of Black Panther Chairman Fred Hampton in “Judas And The Black Messiah.” With this win, Kaluuya became the first Black British actor to win an Academy Award. Despite the nonsense that landed both him and co-star LaKeith Stanfield in the same category, this was an amazing and deserving win.

Yuh-jung Youn also triumphed in Best Supporting Actress, the first Asian actress to win this category in 63 years for her outstanding performance in “Minari.” She’s the first Korean to win an acting Oscar and only the second Asian woman to win an acting Oscar, following Miyoshi Umeki for “Sayonara.” As if that wasn’t impressive enough, Youn proceeded to deliver the best speech of the entire night, both hitting on and poking fun at presenter Brad Pitt, honoring her fellow nominees, and soaking in the historic moment.

UPSETS: BEST CINEMATOGRAPHY AND BEST ORIGINAL SONG
The biggest upset of the night, other than the ceremony ending itself, was “Mank” winning Best Cinematography. While, of course, “Mank” won the ASC award, it shouldn’t have been as big of a surprise, but it was still a shocking moment for “Nomadland” to lose here as it had dominated the entire season before this. Furthermore, it called into question if “Nomadland” was somehow vulnerable to win the top prize at that point in the show. Of course, Zhao’s film still triumphed in the end, but it’s an interesting upset that added some intrigue at a point in the show where most viewers were feeling the show’s sluggish pacing and length. “Mank” also triumphed in Best Production Design, which was widely predicted.

The only other category that could truly qualify as an upset was Best Original Song, in which H.E.R.’s song “Fight For You” from “Judas And The Black Messiah” won. This category was very much up in the air, but it was widely seen as a three-way race between “Speak Now,” “Io Sí (Seen),” and “Husavik.” All of the songs were pre-recorded and aired during the Academy’s pre-show, and H.E.R.’s performance was the most critically acclaimed by most viewers.

Other than those categories, and of course, Best Actor, the other wins were at least mostly expected by a majority of Oscar pundits.

MA RAINEY’S BLACK BOTTOM SETS RECORDS
Despite the acting losses, made infinitely worse by the award presentation order of the ceremony, “Ma Rainey’s Black Bottom” still set some records with its two wins. First, with the win for Best Makeup and Hairstyling, Mia Neal and Jameika Wilson became the first Black winners in the category, after being the first Black nominees there as well. Ann Roth also won for Best Costume Design, making her the second oldest Oscar winner in any category, just slightly edged out by James Ivory for 2017’s “Call Me By Your Name.”

Many, this writer included, believed that Netflix would have the upper hand this Oscar season due to the closing of movie theaters for the majority of the last year and being the saving grace for most movie lovers during the pandemic. Interestingly, the studio was able to snag four wins, but all of them were for below-the-line categories, and one of their two Best Picture nominees, “The Trial Of The Chicago 7,” was the only Best Picture nominee to walk away empty-handed when the night was concluded. Still, these record-setting wins are nothing to sneeze at, and Netflix will obviously be back again in next year’s awards race.

Overall, I personally enjoyed much of the show. I loved the more intimate atmosphere, hearing personal anecdotes from nominees, and the allowance of extended speeches without playing anyone off with music. I certainly missed having clips to showcase all of the nominees’ work. Still, much of the show was highly enjoyable. It was all unfortunately ruined by one of the biggest faceplants in television history, metaphorically speaking. Nothing at all could’ve saved the show from the horrific, disrespectful ending that the producers forced upon us.

But it’s over now. Let’s move on from the awful choices made for the ceremony and celebrate these deserving and record-setting winners. And of course, thanks for sticking with Next Best Picture throughout this crazy Oscar season. Here’s to another exciting year of movies!

What were your biggest surprises of the night? How did you fare on your predictions? Did you enjoy the choices that the producers of the show went with? Let us know in the comments section below or on our Twitter account.