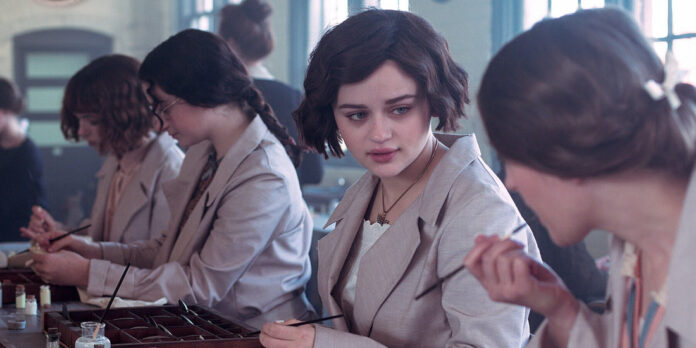 THE STORY – Early in the 20th century, women work at the U.S. Radium Factory, painting glow in the dark watches, unaware of the dangers of working with radium.

​The year is 1927 and the twenties are roaring. Bessie (Joey King) works with her sister Josephine (Abby Quinn) as a dial painter for American Radium. Their sister Mary used to work with them until her death three years prior from syphilis. The two sisters are inseparable but quite different when it comes to their work techniques. Bessie doesn’t turn in nearly as many dials as Josephine because she doesn’t lick the brush after each paint stroke. While her boss tells her the paint will “make her cheeks glow,” Bessie hates the taste. Although painting dials put food on the table, it’s certainly not the life they envision for the future. Bessie dreams of becoming a famous actress with her name in lights. Josephine is the more grounded sister and when she begins experiencing physical symptoms, including dizziness, loose teeth and aching joints, the two worry. Doctor Flint from work visits her, only to be diagnosed with syphilis just like her sister Mary. However, this is impossible considering Josephine is a virgin. Her declining health and mysterious diagnosis lead the sisters to a shocking discovery that will forever change their world.

On both a technical and creative level, “Radium Girls” keeps the viewer’s attention through stylistic choices that stray from your typical historical drama. Directors Lydia Dean Pilcher (who just released “A Call To Spy” earlier this month) and Ginny Mohler cut to black and white footage 1920’s art, news and culture throughout the film. The quick cuts bring a stylistic flair to the film that gives us a sense of the era’s fast-paced nature.

There’s an undercurrent of death running through the film. Bessie and Josephine read the “Book of the Dead,” where Bessie says that she’s not afraid of death. As the girls understand radium’s real effects, they know that death will come for them sooner rather than later. It’s a sobering thought, but they accept it with bravery. They choose to fight for the other women affected by the radium instead of just waiting to die.

Writers Ginny Mohler and Brittany Shaw do an excellent job of making the viewer feel anger towards American Radium for exposing their innocent workers to such a toxic work environment (as well as feeling an extreme sense of dread each moment a woman gets near a paintbrush dipped in radium). We know what the paint’s contents mean for those workers, but they were lied to and told it was healthy. In that way, “Radium Girls” reminded me of “Dark Waters,” another film where corporate greed took precedence over the individual’s health and safety. It’s an infuriating situation that happens all too often.

The ensemble cast of “Radium Girls” all play their parts well, really making you feel the extreme difficulty of the situation. Olivia Macklin, Colby Minifie, and Juliana Sass play former employees who struggle with the fallout of radium poisoning. These are mothers, daughters and wives. They need a job to keep their families fed but staying any longer could mean death for all of them.

Joey King leads the film with depth as Bessie, a carefree 17-year-old who has her head in the clouds. In just a short period of time, everything changes as her life is turned upside down over the realization that radium is toxic and quickly destroying her family and friends. She becomes involved in the fight to shut down the factory and save everyone working there. King has proven her versatility as an actress in the past with her work as Gypsy Rose Blanchard in “The Act.” This is another impressive performance by the actress showcasing her ability to play a harrowing female lead. There is a side plot with Walt (Collin Kelly-Sordelet), a photographer who is a member of the Communist party. This leads to Bessie’s political awakening and encourages her to speak out against issues that matter. However, there are times that this plotline slows down the overall story. Walt disappears for long periods of time and this subplot feels forced compared to the more significant story at hand.

Abby Quinn carries a lot of the emotional weight in the film as Josephine, the hardworking sister who tries to paint as many dials as possible. When she starts experiencing symptoms of radium poisoning, you can see the changes through her facial expressions. It’s painful to watch as pieces of her jaw begin to fall out. As a viewer, you want justice to be served.

“Radium Girls” is a harrowing historical drama that uncovers a disturbing trail of corruption, greed and death. Despite the darkness surrounding American Radium, the film shines a light on the brave women who used their voices to speak up even when no one believed them.