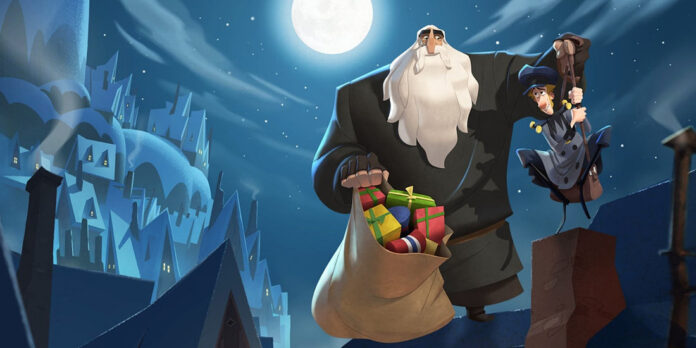 THE STORY – After proving himself to be the worst postman at the academy, a postman is posted to a frozen town in the North where he discovers Santa Claus is hiding out.
​
THE CAST – Jason Schwartzman, J. K. Simmons, Rashida Jones, Joan Cusack, Will Sasso & Norm Macdonald

​​​​The onslaught of traditional biopics is a subgenre that many have become familiar with throughout the years. The formulaic episodes that detail the important milestones in a historical figure’s life is a well-proven test for success. It’s also rather interesting how one can find an even more specific space in this category, and that’s the origin of Santa Claus. Seemingly countless films aim to tell the story of how Old Saint Nick came to be, with wildly different variations on the tale. Netflix’s “Klaus” is yet another film that looks to tell that story, which results in a delightful watch for the holiday season.

Before we meet the famous man himself, we are first introduced to Jesper (Jason Schwartzman), a spoiled and conceded young man who is resisting his training for postal duties in a world where this service seems akin to an impressive military background. At the strong behest of his employer, who is also his father, Jesper is sent to the remote island of Smeerensburg in order to establish a post office, lest he be cut off from his allowance. Upon his arrival, Jesper completely detests his new surroundings until he comes across Klaus (J.K. Simmons), an old woodworker who likes to give out toys to the village’s children. Their bond of friendship helps to not only change Jesper’s perspective but also mend the warring factions between the island’s families that have plagued them for generations.

The one thing that’s immediately apparent is the film’s absolutely gorgeous imagery. While computers were used to enhance some of its visual style, the basis for every frame of animation was hand-drawn. It’s a method that’s sadly going out of fashion but is used effectively here. The designs of the characters and this world feel so intricate and special, and it’s incredibly easy to get lost in the artistry on display. Director Sergio Pablos and his team of animators do a remarkable job of creating this world and never losing the magical touch that draws you in.

At the same time, as stunning as the animation is, the screenplay leaves a lot to be desired. The pedestrian story beats are particularly felt in the first act, where the set-up around an irritating protagonist that will go through a predictable change of his cynical heart is not very interesting. There’s a feeling of familiarity to many other films of this ilk, and this one never really finds a unique way to present its story. As “Klaus” goes on, the overall tone manages to work its charms, particularly as the themes of forgiveness and kindness begin to truly take hold. Still, it’s more the ideas behind these commentaries than their actual execution that is effective, and the script never really rises above the basic premise.

The voice acting in these projects can often be hit or miss, and truthfully, the cast assembled here does a mostly adequate job. Schwartzman is perfectly fine in his role, and it’s appreciated that he doesn’t overdo the part with manic energy. It’s not a particularly noteworthy portrayal, but it does the job to help ground the story. Simmons feels rather limited in his role, and one wishes once again that the screenplay could have been more useful in building up a character that exists mostly on the sidelines. The supporting cast is filled with reliable talent, though the highlight is Norm Macdonald as a boatman who takes pleasure in annoying the main character. His comedic delivery is always a warm presence, and given how annoying the protagonist can be at times, his sarcastic remarks are often relatable.

No doubt there will be more films that attempt to find their own spin on the Santa Claus origin story, and “Klaus” does serve that material well enough. There are deficiencies in the screenplay that limit the impact of the story and some of the voice acting isn’t terribly impressive. At the same time, the tone of the film strikes feeling suited to many of the themes it’s working with, and it works beautifully well with the exquisite animation. Overall, “Klaus” delivers a nice holiday treat that makes it well worth the watch.