“PRISONERS OF THE GHOSTLAND” 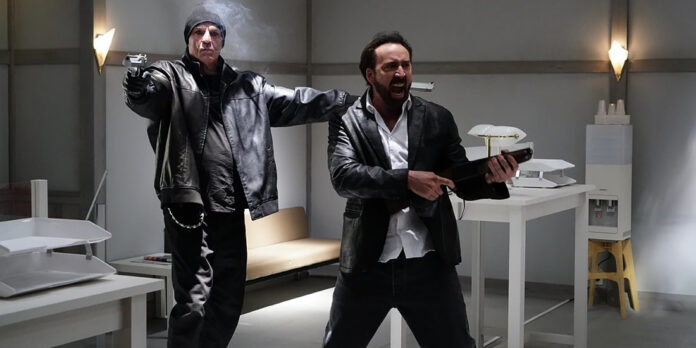 THE STORY – In the treacherous frontier city of Samurai Town, a ruthless bank robber (Nicolas Cage) is sprung from jail by wealthy warlord The Governor (Bill Moseley), whose adopted granddaughter Bernice (Sofia Boutella) has gone missing. The Governor offers the prisoner his freedom in exchange for retrieving the runaway. Strapped into a leather suit that will self-destruct within five days, the bandit sets off on a journey to find the young woman—and his own path to redemption.
​
THE CAST – Nicolas Cage, Sofia Boutella, Nick Cassavetes, Bill Moseley, Tak Sakaguchi & Yuzuka Nakaya

​​​​​It turns out Nicolas Cage’s last film at Sundance, “Mandy,” was just the appetizer. “Prisoners Of The Ghostland” finds the actor returning to the festival, teaming up with famed Japanese director Sion Sono on what he describes as “the wildest movie I’ve ever made.” And that statement is hard to argue with. Dripping with style from the first frame to the last, Sono’s first English-language feature, in a career that spans over 50 movies, is an explosion of styles and genres. An East meets West, samurai and cowboys, post-apocalyptic slice of B-level popcorn entertainment. It’s the kind of midnight madness film that made me miss the movie theaters and would’ve killed it with a packed rabid audience.

There is a bank robbery taking place in an undisclosed part of the world. A man, known only to the audience as Hero (Nicolas Cage), comes in with his partner, yelling for the teller to empty out the register. We know that innocent bystanders are shot but we don’t know how. Sometime later, an all-white suit-wearing man known as the Governor (Bill Moseley) comes rolling into town in a 1994 Toyota Celica. “Don’t mess my white shoes up!” he tells the crowd gathered around him. The Hero is brought out before him in nothing but a loincloth (hello Nicolas Cage’s ass cheeks!) and the Governor reveals the task that he would like the Hero to complete in order to gain back his freedom: find his granddaughter Bernice (Sofia Boutella) and bring her back in five days. If the Hero fails, a black leather outfit he is forced to wear that is equipped with explosive devices will detonate. But wait! There’s more! The Hero has three days to have Bernice speak her name into a device also equipped to the black leather outfit and if she does not, the explosives will detonate! And one more thing! If any harm befalls upon Bernice, the suit will explode? The Hero sets off on a bicycle to the land where Bernice has supposedly been by the ghosts with the stakes set (by this point, you’re either along for the ride or you’re not). Although he finds her quickly, she has lost the ability to speak and he’s warned that if he takes her, a demon will exact his revenge upon him. Time is running out. Tick-tock. Tick-tock.

While Sono has directed better films than this before, hopefully, “Prisoners Of The Ghostland” will inspire American audiences to check out his previous work. But as far as a commitment to a film’s intended purpose goes, this is Sono at his most creative. The level of worldbuilding put into the film’s costumes and production design is reminiscent of the “Mad Max” series. It’s hard to figure out if the film’s low budget hurts the overall production or if it was intended by Sono all along. While it won’t be winning any cinematography awards any time soon, you cannot deny that the production team made the most of what they had to work with.

Throw all of those elements into a spaghetti western with an unhinged Nicolas Cage performance and you have the making of a future cult classic. Not everything is, can, or should be fully explained in this world and although its bizarre choices (characters breaking out into song, unknown rituals and supernatural rules for the world) will not be for everyone, its intended audience will find a lot to appreciate here. One of the film’s best elements is its sometimes foreboding and sometimes delicately beautiful score by Joe Trapanese, which also toys around with the film’s clash of genres, making it one of the year’s best.

Sono suffered a heart attack two years ago and almost died during the experience. As a result, he has imbued his latest film with a thematic undercurrent about time. The song “Time In A Bottle” by Jim Croce also makes an appearance at one point. But let’s be honest with ourselves. That’s not why you’re here. You’re here for the samurai sword fights, to see Nicolas Cage get his testicles blown off, to hear Nicolas Cage scream the word “testicle.” In fact, anything Nicolas Cage does in this movie under Sono’s direction is pretty much why you’re here. The Academy Award-winning actor’s performance may not be as serious and dour as his work was in “Mandy” (he has more fun with the role than you would expect, adding no so subtle touches of comedy). Still, the movie around him is just as batshit crazy!