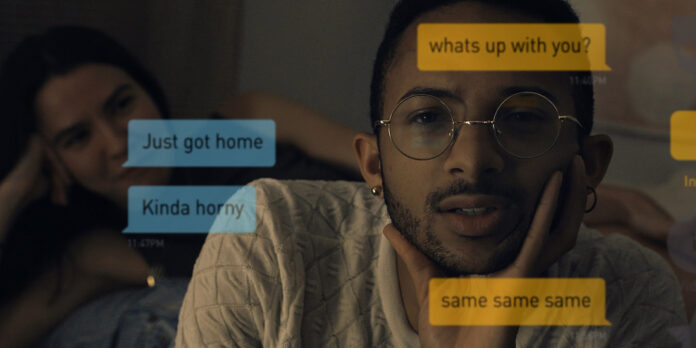 THE STORY – This documentary depicts a diverse set of New Yorkers as they navigate their preferred dating apps, all searching for their special someone.
​
THE CAST – Various New Yorkers
​
THE TEAM – Pacho Velez (Director)
​
THE RUNNING TIME – 81 Minutes

​Online dating has become so ubiquitous over the last few years that it may be time to just call it “dating.” I myself will be attending three weddings this year for couples who met online. And yet, ask anyone who is in the process of seemingly swiping for eternity if they enjoy it and you will undoubtedly get a chorus of sarcastic chuckles. Why is something that is so predominant and, for many, ultimately helpful looked at as such a chore? Director Pacho Velez seeks to explore this conundrum in his latest documentary “Searchers.”

The film follows a very simple approach – New Yorkers of all different ages, ethnicities, and sexual orientations are filmed in medium close-up using dating apps and websites while commenting on what they see and how they’re using these online platforms. Besides some transitional footage of New York City and its inhabitants, these interviews make up the entirety of the film. The main cinematic trick on display is a unique way that the audience views the dating sites with which the documentary subjects are interacting. While simultaneously capturing the film’s talking heads, we see a highly translucent display of the app being used while the subject is engaging in it in real-time. Strangely, it almost mimics the function of a head-up display found in most video games that seamlessly allows the audience to experience the online dating process at the same time as the subjects.

“Searchers” gives off the feeling of a modern human interest story that might be featured on NPR or in a New York Times piece. It’s very matter-of-fact and the interviewees are highly open in what they share. That honesty is the film’s greatest strength. In discussing the peculiarities of online dating, many of the subjects talk themselves into answering the very questions that they pose. A lot of times, they’re charmingly surprised by what they organically learn about their own experiences. The director occasionally guides them along (and even uses the dating apps himself), but for the most part, this is a film made up of candid self-reflecting monologues. The film also depicts a wide array of different types of dating services, from hookup-focused apps to websites devoted to financially-based arrangements, to the most popular platforms. But while the people captured and the services used may be widely diverse, the experiences, frustrations, and curious hesitations that people encounter when seeking online romance are somewhat surprisingly uniform.

The way Velez shows the faces of these apps beyond their avatars and allows them to muse and meander through the typical questions posed by a dating profile quietly shows how odd the entire process can be. It’s something of a paradox to try and show what makes you unique while simultaneously turning yourself into a statistic to be processed through an algorithm. But at the same time, the film doesn’t condemn these methods and, indeed, shows the fun and joyful results that can possibly come from using them.

One curious aspect about the film is how it almost goes out of its way to not include any mention of the COVID-19 pandemic. Filming took place in the summer of 2020 and all of the B-roll is full of masked (and occasionally, distressingly unmasked) New Yorkers. But none of the interviewees mention the pandemic, except for one brief mention of being in quarantine. This, unfortunately, reads like an intentional stripping of current events from a film that is so tied to modernity. To ignore how COVID affected New York, especially the dating scene in a movie all about that very thing, strikes me as a fairly bizarre omission. Not that the film needs to become a specific exploration of the COVID dating scene, but by practically pretending it’s not a factor in these people’s lives, it only stands out even more. Over time, I can see it serving as a decent time capsule of the era, but with strangely little mention of the most pressing and life-changing event that was occurring at the time. It’s like writing a romance story set in early 1940s London and not mentioning the Blitz.

This straightforward documentary serves as an honest and truthful depiction of modern matchmaking. It wisely doesn’t go out of its way to editorialize what it depicts and its interview subjects effectively show the humanity in the person behind the profile.