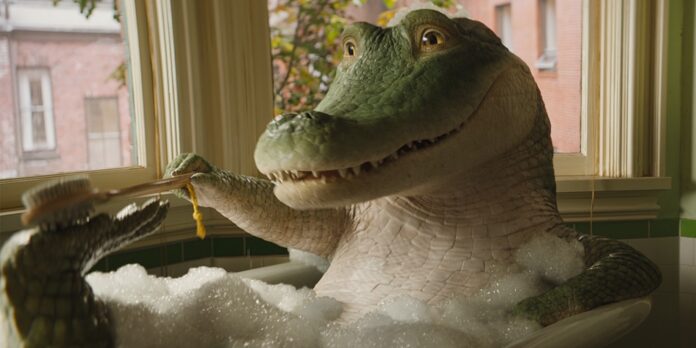 THE STORY – When the Primm family moves to New York City, their young son, Josh, struggles to adapt to his new school and friends. All of that changes when he discovers Lyle, a singing crocodile that loves baths, caviar and great music. The two become fast friends, but when evil neighbor Mr. Grumps threatens Lyle’s existence, the Primms must band together to show the world that family can come from the most unexpected places.

When down-on-his-luck entertainer Hector P. Valenti (Javier Bardem) gets yet another rejection from the television talent show “Show Us What You Got,” he wanders into a pet store to find a small animal he can train to be a part of his act. He gets far more than he bargained for in a tiny crocodile who can sing along to the radio. Naming him Lyle, Valenti teaches him a song-and-dance number and risks everything on booking a theater that will finally give him the recognition (and money) he deserves. But the poor little croc gets stage fright, and Valenti loses everything, forcing him to leave Lyle in his Manhattan brownstone as he goes out to make money on his own. Sometime later, the Primm family moves into the brownstone and are shocked to discover Lyle, now fully grown, living in the attic. Through a series of events, Lyle helps the Primms overcome their unhappinesses, but can the Primms help Lyle overcome his stage fright? And how long can they hide their new friend from their cantankerous downstairs neighbor, Mr. Grumps?

At first glance, you may think that “Lyle, Lyle, Crocodile” is an unholy mess. Javier Bardem singing and pulling faces in a ridiculous wig, Constance Wu and Scoot McNairy dancing and wrestling (respectively) with a CGI crocodile, and of course, said CGI crocodile himself, walking upright around New York City singing overproduced radio schlock in the voice of pop sensation Shawn Mendes. It’s not necessarily an appealing prospect for adults, and yet, here we are: “Lyle, Lyle, Crocodile,” the film adaptation of the children’s books by Bernard Waber, is one of the most delightful family films in quite a while, one that parents won’t mind putting on repeat when their kids inevitably ask them to.

A large part of this comes down to the adorable design of Lyle himself. While his mouth doesn’t always move quite enough to look like he’s actually singing as full-throatedly as Mendes is, the visual effects artists have come up with a design that perfectly balances looking like a real crocodile and an adorable child-friendly anthropomorphized version of a crocodile. The look in his eyes when he is too nervous onstage to sing is heartbreaking, and the sense of mischief when he’s playing with Valenti and the Primms is infectious. While the effects work isn’t always seamless, the fact that a completely CGI character can elicit this type of emotion is impressive. Creating a believable Lyle is possibly the film’s biggest hurdle, and it clears it relatively easily.

The cast is another big reason the film works as well as it does. As Mr. and Mrs. Primm, Scoot McNairy, and Constance Wu are lovely, utterly believable as nice parents who want the best for their son and are extremely worried about having a live crocodile in their house, even (or perhaps, especially) one who sings. Because this is primarily a film for children, the screenplay takes a lot of shortcuts with how their characters become more accepting of Lyle, but when the performances are this warm and the general vibe this genial, it’s hard to care too much. Winslow Fegley is a similarly appealing presence as the Primms’ young son. While the performance isn’t completely free of typical child-star mugging (a bit of a necessity when you’re acting against a green screen), Fegley tugs at the heartstrings effectively as he embodies the loneliness of a kid in a new town, the anxiety of being in a big city for the first time, and the confidence he gains from having Lyle as a friend. And then there is Bardem, who is clearly having the time of his life, embodying the vaudevillian Valenti, mugging for his life and dancing up a storm. It’s precisely the sort of performance you want from an actor like Bardem “slumming it” in a film like this: Completely uninhibited and committed to creating an all-caps CHARACTER that will suck the audience into the world of the film. He’s a blast to watch whenever he’s on screen, and he finds the perfect sparring partner in Brett Gelman as the appropriately-named Mr. Grumps. Gelman is made for roles like this, and like Bardem, he sinks his teeth into the role, chewing the scenery whenever possible.

The last thing that elevates “Lyle, Lyle, Crocodile” above your average family flick is the earworm songs by Pasek & Paul. The Oscar-winning duo has always been better at writing generic pop songs than musical theater songs that tell a specific story about specific characters. It is a relief to find that this is not a full-fledged musical. The songs do feel tailored to the story a bit, especially in how Valenti’s song for his performance with Lyle, “Take A Look At Us Now,” is reprised. Still, for the most part, they’re just catchy tunes that could seamlessly transition to the radio without a hint of being from a film about a singing crocodile. They’re not perfect – “On Top of the World” could have benefited from a bit more specificity, and “Rip Up The Recipe” gives Mrs. Primm a personality trait of being an overly ordered, Type A rule-follower that we haven’t really seen prior only to have her overcome it over the course of one verse and chorus – but the songs are fun enough that it doesn’t really matter. Children will happily dance and sing along, and parents will happily do so right along with them.

Making a film that appeals to children while not offending or boring adults can be a difficult task, but “Lyle, Lyle, Crocodile” succeeds in doing so. It embraces the simple sweetness of its source material without a trace of irony. While it moves swiftly enough that the youngest audience members will stay engaged, it never insults the intelligence of its older audience members by moving through its narrative beats so fast that they don’t feel real (although some lapses can only be explained by movie logic). While it never strays too far from the standard family film style, the charm of its cast and music ensure that “Lyle, Lyle, Crocodile” is always enjoyable for everyone watching. It may not have ripped up the recipe completely, but it plays around with the ingredients just enough to be distinctive and plenty tasty.

<b>THE GOOD - </b>A mostly enjoyable, inoffensive family flick with catchy tunes and a fun over-the-top performance from Javier Bardem.<br><br> <b>THE BAD - </b>Even taking into account that it's about a singing crocodile, so much of it makes no sense or doesn't seem to work according to its own rules.<br><br> <b>THE OSCAR PROSPECTS - </b><a href="/oscar-predictions-best-original-song/">Best Original Song</a><br><br> <b>THE FINAL SCORE - </b>6/10<br><br>"LYLE, LYLE, CROCODILE"