“ONE OF THESE DAYS” 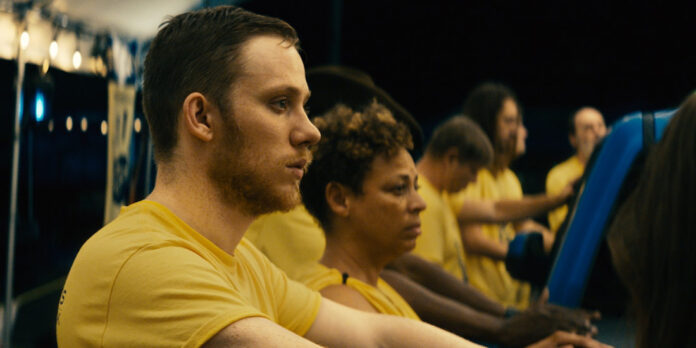 THE STORY – In a small Texan town, a local car dealer holds the “Hands on a Hardbody” competition every year. In this contest, participants selected by lucky draw stand around a brand new pickup truck donated by the organizer, place one hand on the car, and are not allowed to take it away. Whoever holds on the longest gets to keep the car. Short breaks are few and far between, and the competitors not permitted to sleep. Meanwhile, a fair kicks off around the fading, exhausted contestants. Car dealership employee Joan finds encouraging words for everyone, including the young family man Kyle, who wants to win the car at all costs. But then the competition takes an unexpected turn.
​
THE CAST – Joe Cole, Carrie Preston & Callie Hernandez
​
THE TEAM – Bastian Günther (Director/Writer)
​
THE RUNNING TIME – 120 Minutes

​​We are told at the very start of Bastian Günther’s “One of These Days” that the film is inspired by true events. Indeed, there was an annual “Touch the Truck” endurance test that took place in Texas, where twenty contestants would compete to be the last one standing, with one hand resting at all times on a brand new pickup truck – the winner walking away with the keys. This competition ended when a contestant died. The film takes this true-life tragedy and uses it to analyze the current socio-economic woes of blue-collar America as well as dismantling the American Dream. While some directors may be nervous to approach such a topic, Günther has demonstrated in the past that he isn’t afraid to tackle the uncomfortable truths of economic strife. “One of These Days” makes for a fascinating conversation starter in regards to the surreal and unsettling political environment that we all find ourselves in.

The film opens with a recording taking place at a local car dealership in which the owner, Bubba Boudreaux (Douglas M. Griffin), addresses the camera directly informing us of the competition. Boudreaux is a larger-than-life figure, wildly animated and your typical Texan. We then cut to shots of a small rural town, a place where everyone knows everyone and their business. The use of Google Maps over the opening credits helps to illustrate just how isolated this place and its people are. The people there work unglamorous jobs, with our main protagonist, Kyle (Joe Cole), barely making ends meet working at a fast-food restaurant. He believes that winning the truck will help the future of his newly born son and his wife, Maria (Callie Hernandez).

Each year, the car dealership’s PR woman, Joan (a wonderful Carrie Preston), organizes this “Touch the Truck” style competition, selling it as just a harmless bit of fun. The competition starts rather smoothly – before Kyle butts heads with Kevin (Jesse C. Boyd), who has it out for him. The other contestants include a young woman who sees the car as her ticket out of the town, a couple of redneck friends as well as a man who refuses to remove his hand from the vehicle even during breaks. One by one, the contestants all drop out until there’s only a handful left.

“One of These Days” is a compelling piece of storytelling, a modern-day Greek tragedy grounded in a discomforting reality. The competition makes up the major part of the narrative, and we watch each of the contestants slowly crumble under the pressure. At first, the truck is seen as the representation of the American Dream; in theory, anyone can obtain it. However, as the competition unfolds, it quickly becomes clear that not every contestant is equal. Age, gender, race, and ethnicity play a role in deciding who becomes the winner. It isn’t just the American Dream mythology that Günther is criticizing here, but also the plight and torment that game show contestants must endure for the sake of mass entertainment. In one scene, we see the whole town come together for a party as the competition takes place. The second the rain comes, though, the entire community abandons the contestants.

Joe Cole’s performance as Kyle is key to making this moral tale work on such an effective level. Cole is an actor who’s criminally underused and underappreciated. His work in films like “A Prayer Before Dawn” and “Green Room” as well as in the show “Peaky Blinders,” demonstrates his versatility as an actor and capability to take on any role regardless of its physical demands. We watch as Kyle descends into his own personal waking hell, and even when his wife tells him “It’s just a car,” Kyle’s blind determination and single-mindedness overtakes any common sense or reason.

The film is beautifully captured by cinematographer Michael Kotschi who makes efficient use of tight close-ups to create claustrophobia and reinforce the entrapment of these contestants. When questioned about the competition, Joan replies that the contestants have free will: “They can leave whenever they want.” But can they, really? The use of sound, with the buzzing of mosquitoes, the deafening chirping of crickets, and the rumblings of thunder clouds all add to the slow brooding tension.

The film’s ending feels slightly muddled, with an epilogue of sorts that feels slightly out-of-place and disjointed. Still, it’s a fascinating look at the hopelessness and toxicity that surrounds the mythos of the American Dream and the devastating consequences that occur when we become obsessed with pursuing it. Günther manages to show us that some dreams pay the ultimate price, and there are no winners – just losers.