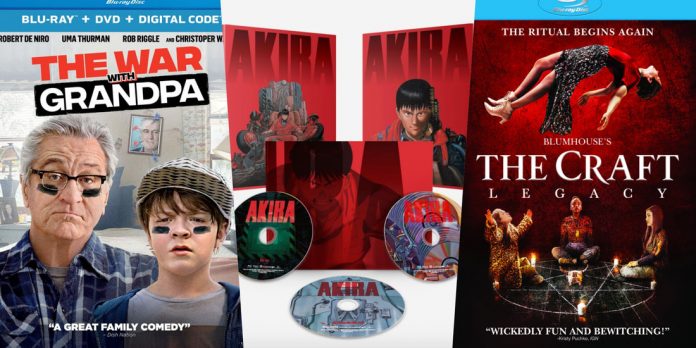 It’s a light week for blu-ray releases, perhaps due to it being Christmas week and the end of the year, but nevertheless, let’s take a look at what Blu-rays came out!

​Lastly, there are a couple of 2020 releases coming to Blu-ray this week. We have “The Craft: Legacy,” a sequel to the 1996 cult classic and directed by Zoe Lister-Jones. We also have “The War with Grandpa,” a family comedy starring Robert De Niro, Uma Thurman, Rob Riggle, Oakes Fegley, Cheech Marin, Jane Seymour, and Christopher Walken.

This week, in honor of Christmas, I wanted to recommend a favorite of mine that may not necessarily be classified as a Christmas film but instead has several key scenes that take place around Christmas and wintertime and that is Douglas Sirk’s “All That Heaven Allows” from the Criterion Collection. This 1955 melodrama stars Jane Wyman as a wealthy but lonely widow with two college-aged children who falls in love with her gardener (played by a dreamy Rock Hudson), much to the horror and judgment of her family, friends, and community. One of the most iconic 50s melodramas and of Sirk’s filmography, it heavily inspired filmmaker Todd Haynes (particularly his film “Far From Heaven” with Julianne Moore). This film is just one of my favorites with its lush scenery and not a wasted shot in its almost 90-minute runtime, not to mention the absolute perfection of its costuming and production design. It is also just a wonderful and devastating love story that will break your heart but put it back together again. And as far as its Christmas-ness, in addition to some snowy winter set pieces, there is a Christmas morning scene that will make you never look at a television set the same way again.

The release by Criterion is lovely as always. The gorgeous and legendary Sirk cinematography is on full display here, as well as a fitting vintage cover art design and supplements that include various documentaries and interviews on Douglas Sirk and star Rock Hudson. If you’re a fan of 1950s melodrama or at the very least Todd Haynes’ films “Far From Heaven” and “Carol,” this is a must-own and what better time of year to watch it than now!

So, will you be picking up any of these releases? The “Akira” release certainly looks enticing to me, and I’ve got to add “The Best Years of Our Lives” to my collection sometime soon. What upcoming Blu-ray releases are you looking forward to? Are there any special releases that you asked for for the holidays? Let us know in the comments section below or on our Twitter account.