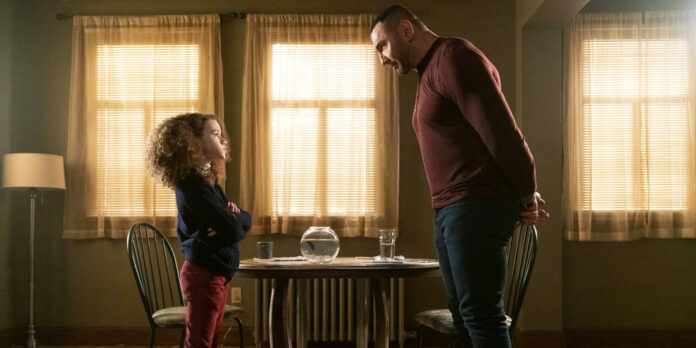 THE STORY – Nine-year-old Sophie catches JJ, a hardened CIA operative, spying on her family during a routine surveillance operation. In exchange for not blowing his cover, JJ begrudgingly agrees to show the precocious girl how to become a spy. What at first seems like an easy task soon turns into a battle of wits as Sophie proves you don’t need much experience to outsmart a seasoned agent.

Pairing a hulking action star with a cute kid is a well-worn formula. “Kindergarten Cop,” “The Pacifier,” “The Spy Next Door,” and even the recent “Playing With Fire” are just a few in this long line of films to play this mismatched buddy angle to mixed results. Peter Sagal’s “My Spy” uses this as a starting point and doesn’t add much to it. Unfortunately, outside of the mildly funny image of seeing Dave Bautista paired with a spunky little girl for 101 minutes, there’s not much that sets this film apart.

After failing miserably at his first-ever mission while in Russia, CIA agent JJ (Dave Bautista) feels he has a lot to prove. He’s assigned to a simple job: to surveil Kate and Sophie (Parisa Fitz-Henley and Chloe Coleman), the family of Victor Marquez, a French arms dealer. Tech Specialist Bobbi (Kristen Schaal) joins him for the mission, which essentially consists of sitting and monitoring the bugged apartment. It’s a boring gig, though Bobbi is excited to learn from her hero, JJ. Naturally, things don’t go as planned.

Sophie fits the mold for these buddy-comedies. She’s precocious, a bit of a loner, and wise beyond her years. While the writing doesn’t do her any favors, Coleman does well in the role. Almost immediately after JJ bugs their apartment, Sophie discovers their surveillance equipment and traces it back to their hideout down the hall. Rather than rat them out, she decides to blackmail JJ into helping her fit in better at school and teach her about being a spy. Coleman plays well off of Bautista, mostly bossing him around, but thankfully avoids any hint of winking at the camera that she’s in on the jokes. One particularly funny scene, though spoiled in the trailers, has Sophie easily outsmarting a lie detector test. She tells obvious lies, like loving his tattoos. Coleman plays the scene straight, never giving too much or going over the top.

Though one would expect this film to be an action-comedy, there’s surprisingly little action to be found. Sophie and JJ spend the majority of the movie bonding as he helps her get used to her school and learn what it’s like being a spy. These training sessions have their sweet and funny moments, like brainstorming great final lines before ending the bad guy. As one would expect, a romance begins to blossom between JJ and Sophie’s mom, Kate, aided by an eye-rolling wardrobe update from the gay neighbors next door. While these moments are all mostly harmless, it’s hard not to think it’s mostly a waste of Bautista’s natural talents as an action star. He has one fight in the climax, but little action otherwise.

Before watching the film, I was surprised to discover that “My Spy” was rated PG-13. Sure enough, while the humor and plot seem designed to be very kid-friendly, there’s a fair amount of language throughout the film. The violence may be limited, but a few moments certainly warrant the PG-13 rating, including a decapitated head flying through the air that’s freeze-framed in surveillance footage. The film may have the visual style of a Disney Channel Original Movie, but the content skews a little older. It’s certainly an odd choice to mix in the language and violence to appeal to older kids when the simplicity and silliness of the plot will likely turn them off from the start.

“My Spy” doesn’t add anything new to the well established “big guy, little kid” formula, but it’s also pretty harmless as a whole. Bautista seems to have fun with Coleman and embraces his role doling out dad jokes, giving the film enough energy to carry the audience through. Despite the odd pairing of an elementary-aged plot with PG-13 content, young viewers might get enough of a kick out watching young Sophie learn some spy tactics while helping her mom fall in love. This is a forgettable film, but it could’ve been worse.