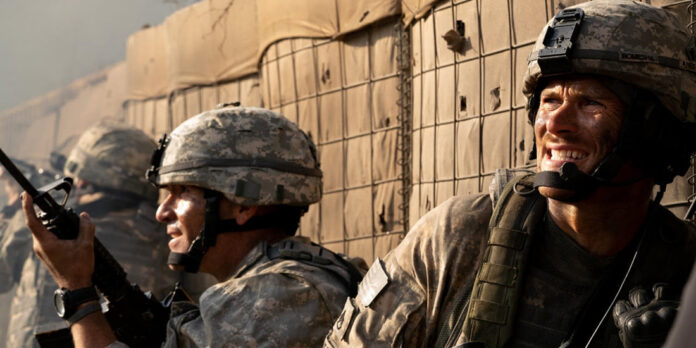 American Veteran and director Rod Lurie (“The Contender”) pays tribute to the U.S. Army’s efforts in Afghanistan with his latest film “The Outpost.”  With a large ensemble cast, an incredible true story and a deep connection to the material, Lurie’s latest may not rank up there with the greatest war films of all time but is still a worthwhile effort. Featuring a dazzling showcase of action spectacle throughout the second half of the two-hour-long film, “The Outpost” portrays the Battle of Kamdesh in all of its glory and horror.

Title cards in the very beginning set up everything we need to know about “The Outpost.” It’s 2006 in Northern Afghanistan. The U.S. Army is attempting to promote counterinsurgency by connecting with the locals to try and stop the Taliban. This yields mixed results as tensions are always high and our troops are unaware of who might be spying for the Taliban. One of these posts is known as Kamdesh. Its location is in a remote valley surrounded by the Hindu Kush Mountains. The spot is essentially like shooting fish in a barrel as the U.S. Army are sitting ducks should the Taliban decide to attack with a powerful force. And on October 3rd, 2009, that’s exactly what happened.

Lurie spends the first hour of “The Outpost” introducing us to the men stationed at the outpost including Captain Keating (Orlando Bloom), Staff Sergeant Clint Romesha (Scott Eastwood), Specialist Ty Michael Carter (Caleb Landry Jones), among a slew of others. Despite a very large cast of talented actors, no one is able to stand out except for Landry Jones. As the odd man out in the group who no one wants to trust, it’s quite remarkable to see him go from burning the outpost’s feces to displaying remarkable acts of courage to protect his fellow brothers in arms. And he does it all by taking the audience on an emotional journey with the character, one that develops a great deal of empathy and gives the film its beating heart.

While the first act contains a number of surprising deaths, the other characters never receive as much of an arc or development as Landry Jones, and as a result, most of the characters we are introduced and say farewell to don’t leave as much of an impact. However, by the time we get to the film’s second half, Lurie’s filmmaking prowess comes roaring through with ferocity and urgency. It’s an intense battle, with clear geography and stakes (the first act does an excellent job of establishing the base’s weaknesses in the event of a heavy attack) and Lurie does a great job that it makes up for whatever shortcomings the first half has.

Almost documentary-like in how it portrays the behavior and relationships these men all share with each other, “The Outpost” only suffers from its lack of character perspective in its first half. Most of the men remain nameless to the audience’s mind, even with the additional aid of seeing their names pop up on the screen when they appear. However, this “Alamo”-like story remains a fitting tribute to the real-life people who not only won medals for their acts of bravery in the face of overwhelming odds but also to the ones who gave their lives as well.