My 2021 Oscar Predictions: The Below-The-Line Races 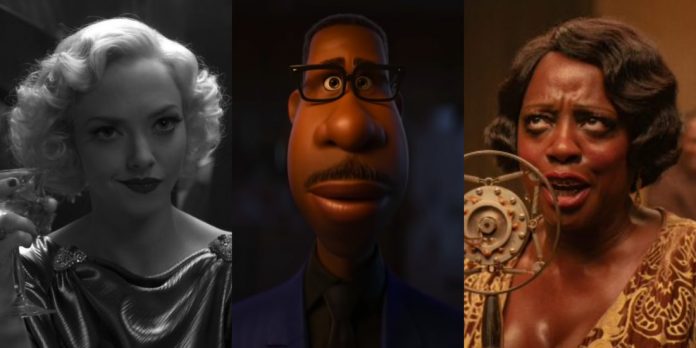 If you’ve been following my series of Prediction Articles for Golden Globes & SAG, you’ve probably noticed that I try (my best) to take emotion out of my predictions and focus on data and stats. Next up are the nine craft races that can make or break a film’s chances of winning Best Picture. The races we’ll be looking at are Best Cinematography, Costume Design, Film Editing, Makeup and Hairstyling, Production Design, Score, Song, Sound, and Visual Effects. After, we’ll take a look at the shorts and Animated, Documentary & International Feature Film. Tomorrow, I will be back with my predictions in the above-the-line categories.

Primarily I will be basing these predictions on Guild, Critic, Golden Globe, SAG, and BAFTA performance. I will also be considering that since the number of Best Picture nominees expanded in 2009 how those films have performed in each category.

As a quick reminder before we get started, the Best Picture nominees are:

Winner: “Nomadland” – Joshua James Richards
Most Likely To Surprise: “Mank” – Erik Messerschmidt
Thoughts: Joshua James Richards has won the BAFTA and the Critics Choice, and should easily be on his way to his first Oscar win. That is unless the Academy is impressed by “Mank” and its homage to “Citizen Kane” cinematography which ironically also lost this category but did pick up an important win at the American Society Of Cinematographers.

Winner: “Ma Rainey’s Black Bottom” – Ann Roth
Most Likely To Surprise: “Mank” – Trish Summerville
Thoughts: If you’re curious as to why I’ve briefly paused from alphabetical order, it’s because Best Costume Design and Best Production Design are birds of a feather—if you win one, your chances of winning the other almost doubles. Roth seems poised to follow her BAFTA, Critics Choice, and Costume Designer Guild Awards up with her second career Oscar. Luckily for Roth, this category doesn’t favor Best Picture nominees as six of the last eleven winners have defeated a Best Picture nominee.

Winner: “Mank” – Production Design: Donald Graham Burt, Set Decoration: Jan Pascale
Most Likely To Surprise: “Ma Rainey’s Black Bottom” – Production Design: Mark Ricker, Set Decoration: Karen O’Hara and Diana Stoughton
Thoughts: Graham and Pascale seem poised to follow their BAFTA, Critics Choice, and Art Directors Guild Award wins up with his second career Oscar and her first. Unlike Best Costume Design where Best Picture nominees are not favored, Best Production Design absolutely does favor Best Picture nominees as nine of the past eleven years numbered amongst the nominees. If you’re looking to take a risk, it may be best to predict “Mank” for an upset in Best Costume Design.

Winner: “Ma Rainey’s Black Bottom” – Sergio Lopez-Rivera, Mia Neal, and Jamika Wilson
Most Likely To Surprise: “Mank” – Gigi Williams, Kimberley Spiteri, and Colleen LaBaff
Thoughts: Lopez-Rivera, Neal, and Wilson have swept BAFTA, Critics Choice, and Hollywood Makeup Artist and Hair Stylist Guild Awards. As a result, the trio should each easily win their first Oscar. If you have a chance before Oscar Sunday to check out the behind-the-scenes of “Ma Rainey’s Black Bottom,” they go into extensive detail of how they replicated Ma Rainey’s look down to her horsehair wig. It’s impressive work that is worth honoring and will give us the first-ever Black winners in this category.

Winner: “Soul” – Trent Reznor, Atticus Ross and Jon Batiste
Most Likely To Surprise: Minari – Emile Mosseri
Thoughts: Yes, “Soul” has swept all of the precursors, and its composers are helped because the film is also favored to win Best Animated Feature. But only once in the past eleven years when living legend, Ennio Morricone, finally triumphed for “The Hateful Eight” (2015), has the winner not been from a Best Picture nominee. This leaves the door open just a little for “Minari“ and its late breaking surge of popularity, momentum and adoration to possibly upset.

Best Original Song
“Fight For You” from “Judas And The Black Messiah – Music by H.E.R. and Dernst Emile II, Lyrics by H.E.R. and Tiara Thomas
“Hear My Voice” from “The Trial Of The Chicago 7” – Music by Daniel Pemberton Lyric by Daniel Pemberton and Celeste Waite
“Husavik” from “Eurovision Song Contest: The Story of Fire Saga” – Music and Lyrics by Savan Kotecha, Fat Max Gsus and Rickard Göransson
“Io Sì (Seen)” from “The Life Ahead” – Music by Diane Warren, Lyrics by Diane Warren and Laura Pausini
“Speak Now” from “One Night in Miami…” – Music and Lyrics by Leslie Odom, Jr. and Sam Ashworth

Winner: “Speak Now” from “One Night in Miami…” Music and Lyrics by Leslie Odom, Jr. and Sam Ashworth
Most Likely To Surprise: “Io Sì (Seen)” from “The Life Ahead” – Music by Diane Warren, Lyrics by Diane Warren and Laura Pausini
Thoughts: Being in a Best Picture nominee is not an advantage in the Best Original Song category. Only four Best Picture nominees were able to take home this award out of the seven times they numbered amongst the nominees. None of the songs above have become massive chart-topping hits, nor are they from the expected Best Animated Feature winner (“Soul“) where winners typically come from. This category is a fight between Critics Choice Award winner “Speak Now” and Golden Globe winner “Io Sì (Seen).” A recent trend we’ve seen is the singer-actor/actress receiving double nominations in the past four years. Still, only Lady Gaga was awarded Best Song for “Shallow” (shared with Mark Ronson, Anthony Rossomando, and Andrew Wyatt) from “A Star is Born” (2018) after losing Best Actress. Helping Odom Jr. is Netlfix’s baffling decision to push for “Husavik” over “Io Sì (Seen).” But Warren is on her 12th career nomination and is in unchartered territory as she’s never entered the Oscars after winning a major precursor—it may just be her turn.

Winner: “Sound Of Metal” – Nicolas Becker, Jaime Baksht, Michelle Couttolenc, Carlos Cortés and Phillip Bladh
Most Likely To Surprise: “Mank” – Ren Klyce, Jeremy Molod, David Parker, Nathan Nance, and Drew Kunin
Thoughts: The Academy combined Sound Mixing and Sound Editing into the singular Best Sound category. “Sound Of Metal” has won both the BAFTA and Cinema Audio Society Award. If ever a film deserved to win Best Sound, it’s “Sound Of Metal,” a masterclass in the field as the audience hears the film from Ruben’s (Riz Ahmed) perspective as he struggles with losing his hearing. Making this all the sweeter should the team behind “Sound Of Metal” audio win, they will all be first-time winners.

Winner: “Tenet” – Andrew Jackson, David Lee, Andrew Lockley, and Scott Fisher
Most Likely To Surprise: “The Midnight Sky” – Matthew Kasmir, Christopher Lawrence, Max Solomon, and David Watkins
Thoughts: None of the nominees are also Best Picture nominees. Typically, in this situation, the best way to make a prediction is to choose the film most likely to have made the cut, which given his track record is Christopher Nolan’s “Tenet.” Add in the fact that Christopher Nolan films have picked up this award twice for “Inception” (2010) and “Interstellar” (2014), and it starts to look foolish to doubt the film’s chances. For Lockley, this will be his third win for a Nolan film and second for Fisher, and first for Jackson and Lee.

When trying to win your office pool, most people who’ve had the time to do an extensive Google search will accurately predict Best Director or Best Supporting Actor. But it’s the other three picture races: Best Animated, Documentary, and International Feature, along with the three shorts: Animated, Live Action, and Documentary, which can be the difference between winning and being the runner up.

Below we’ll take a look at these six make or break races and how the films have performed throughout the season.

Winner: “Soul”
Thoughts: Why beat around the bush after winning Golden Globe, BAFTA, Critics Choice, and practically sweeping the Annie Awards? This is as close to a lock as it gets. Helping Pixar’s cause is its two additional Oscar nominations for Best Sound and Best Score. Anyone telling you otherwise is trying to torpedo your predictions.

Winner: Denmark – “Another Round“
Thoughts: Denmark’s “Another Round” after losing the Golden Globe to “Minari” recovered at the BAFTA Awards where it finally picked up a major precursor. But it’s the inclusion of Thomas Vinterberg in the Best Director category that has this almost entirely locked up. Should Denmark win, this will be their fourth win in the category and will tie them for third-most overall wins with Japan and Spain.

Winner: “My Octopus Teacher“
Thoughts: “My Octopus Teacher” has picked up the BAFTA Award, the PGA and the ACE Eddie for this exploration of the friendship between a man and an Octopus living in South Africa. If you have the chance to check it out, it’s streaming on Netflix.

Winner: “A Love Song for Latasha”
Thoughts: “A Love Song for Latasha” is about the civil unrest in Los Angeles after the shooting and death of 15-year-old Latasha Harlins in 1992. The documentary is available also currently available to stream on Netflix. If the Academy goes in another direction, then look out for “Do Not Split” about the 2019 protests in Hong Kong, which could upset.

What do you think of my final predictions? Be sure to listen to the Next Best Picture team’s final predictions here and check out our final grouped predictions tomorrow on the website, along with my own above-the-line predictions. Let us know your thoughts in the comments below or our Twitter account.