“How Did They Make A Movie From That?” 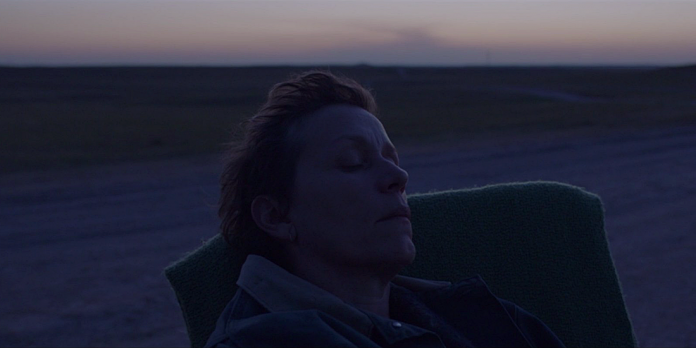 In the final days of this year’s Oscar race, one of the most heated categories is easily the one for Best Adapted Screenplay, with most awards prognosticators seeing this as a two-script race between Christopher Hampton & Florian Zeller’s adaptation of Zeller’s play “The Father” and Chloé Zhao’s adaptation of Jessica Bruder’s non-fiction best-seller “Nomadland.” While plays are a familiar source of adapted screenplays, bringing non-fiction books to the screen is less common, making Zhao’s nomination all the more notable.

Adapting any previously published material to the screen is a challenge, but screenwriters who adapt a non-fiction book into a screenplay face several additional hurdles. First, the writer has to isolate the fictional story that can be fashioned from the non-fiction material, which is sometimes no easy task. The next step is to decide which character, whether fictional or one based on a real-life person, the story will center on, and finally create a believable arc for that character that will be the spine of the film.

It is a challenging job, but as one of those rare non-fiction adaptations in the screenplay race this year, it might be an opportune time to look back on five recent scripts that have not only risen to that challenge but have been honored with an Oscar nomination (or even the big prize itself) in the process.

Written by Chloé Zhao, adapted from the book “Nomadland: Surviving America in the Twenty-First Century” by Jessica Bruder

In her book, Bruder looks at the big picture of how the struggling U.S. economy has displaced many older Americans from their house-centric life, forcing them to take to the road in their campers and RVs to find new communities elsewhere. In adapting the profiles of contemporary nomads that Bruder has collected, Zhao takes a slightly different route than most adapters of non-fiction material by placing a fictional character — Frances McDormand’s Fern — at the center of her story. By having Fern become one of the “houseless” herself, she meaningfully interacts with groups of real-life nomads, including campsite founder Bob Wells, Linda May, and the charismatic Charlene Swankie. All of them figure prominently in Broder’s book. Zhao’s move to write fictional dialogue for a fictional character and proceed to mix it with the real-life words of people looking for some meaning late in their lives is very bold. But by choosing to focus her screenplay on capturing the hopes and dreams of these nomads’ lives, Zhao has created a beautiful tone poem of a script.

Written by Charles Randolph and Adam McKay, based on the book “The Big Short: Inside the Doomsday Machine” by Michael Lewis

Michael Lewis’ acclaimed look at the 2007 financial crisis was notable for taking a different tack from other books on the subject by focusing on those few financial figures who, instead of being ruined by the market meltdown, actually bet against the market before the crash and made out like gangbusters. Lewis’s book, which contained a large cast of characters and was filled with complicated Wall Street jargon, posed an enormous adaptation challenge for screenwriters Charles Randolph and Adam McKay. They solved the first by isolating the three most essential storylines from the book and interwove the stories to create a single narrative. The second task of explaining obscure Wall Street terminology was solved ingeniously by breaking the fourth wall and having non-finance celebrities, such as Selena Gomez and chef Anthony Bourdain, explain them all to us in layman’s terms. (Believe me, when Margot Robbie explains subprime mortgages to you while lying naked in a bubble bath and sipping champagne, you tend to pay attention). The happy result for Randolph and McKay was an Academy Award for “The Big Short.”

Written by Steven Zaillian & Aaron Sorkin, adapted from the book “Moneyball: The Art of Winning an Unfair Game” by Michael Lewis.

Statistics. Now there’s a subject that really screams “that’s a movie!” but, remarkably, in the hands of director Bennett Miller and Oscar-winning screenwriters Steven Zaillian & Aaron Sorkin, the film’s subject of sabermetrics — the empirical analysis of baseball — actually comes alive on screen. Whereas Moore’s book digs deeply into the mathematics of the game and the theory that a player who helps his team score more runs is more valuable than one with a high batting average, the film personalizes the story, veering from the math to how that concept changed the fate of one major league team — the Oakland A’s — and its general manager Billy Beane (Brad Pitt). Zaillian’s script (with rewrites by Sorkin) skillfully blended Moore’s depiction of the sabermetric theory with a classic underdog story of Beane, using the concept shown to him by a mathematics whiz (Oscar nominee Jonah Hill) and applying it to his poorly-funded team to make them a winner. That unlikely blending of subjects worked with audiences and brought both Zaillian and Sorkin an Oscar nomination for Best Adapted Screenplay.

Written by Aaron Sorkin, adapted from the book “The Accidental Billionaires: The Founding of Facebook, a Tale of Sex, Money, Genius, and Betrayal” by Ben Mezrich

Mezrich writes the story of what was then called “Thefacebook.com” with a narrative style in his non-fiction best-seller, including the real-life characters who came to life in “The Social Network.” Mezrich takes an overview of the founding of Facebook, devoting the book’s early chapters to the social climate of Harvard at the time, then shifts his focus to business, dwelling on the mechanics of setting up the website and finally on Mark Zuckerberg’s transition to Silicon Valley. It’s up to Aaron Sorkin to fill in the founders’ personalities and the conflicts that tore them apart. He does so by following each of the major parties involved in the original founders’ breakup — the insensitive Zuckerberg (Oscar nominee Jesse Eisenberg) who may or may not have appropriated the idea of Facebook, his former friend Eduardo Saverin (Andrew Garfield), who felt betrayed by Zuckerberg and the Winklevoss twins (Armie Hammer) who argued that Zuckerberg built Facebook on their original idea. All this culminates in a consequential trial, an Aaron Sorkin specialty, and through its skill and presentation, his script brought Sorkin an Academy Award.

Written by William Broyles Jr. and Al Reinert, adapted from the book “Lost Moon: The Perilous Voyage of Apollo 13” by Jim Lovell and Jeffrey Kluger

The granddaddy of this most recent cycle of non-fiction screenplay adaptations is arguably “Apollo 13,” based on the book “Lost Moon,” written by Jeffrey Kluger and astronaut Jim Lovell. They commanded an aborted 1970 lunar mission that nearly resulted in tragedy. Yes, much of “Lost Moon” reads like a memoir. Still, the book also offers a detailed analysis of just what goes into a lunar flight and, more broadly, provides a valuable overview of just what NASA was like during this most significant period of the U.S. space program. While the Lovell character (Tom Hanks) is still the main focus of the screenplay by Broyles and Reinert, they personalize a wide range of characters instrumental in the launch, especially Lovell’s team of Jack Swigert (Kevin Bacon) and Fred Haise (Bill Paxton). Lovell’s and Kluger’s “Lost Moon” was undoubtedly non-fiction. Still, Broyles and Reinert’s saga of the three men in a capsule facing potential death is as gripping as any thriller and brought both screenwriters an Academy Award nomination.

​Do you think “The Father” will win the Oscar for Best Adapted Screenplay this weekend? What about “Nomadland?” Let us know what you think in the comments section below or on our Twitter account and be sure to check out our Oscar predictions here.