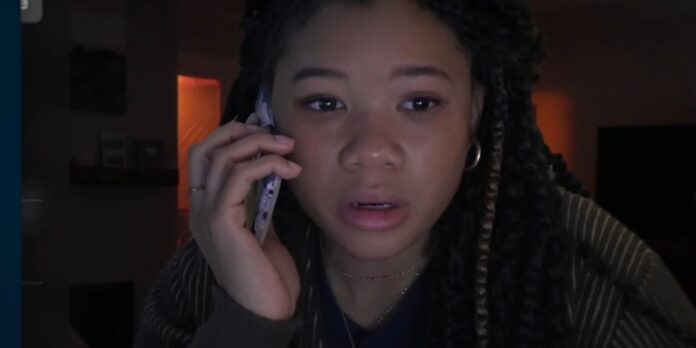 THE STORY – When her mother disappears while on vacation in Colombia with her new boyfriend, June’s search for answers is hindered by international red tape. Stuck thousands of miles away in Los Angeles, June creatively uses all the latest technology at her fingertips to try and find her before it’s too late. However, as she digs ever deeper, her digital sleuthing soon raises more questions than answers.

2018’s “Searching” was a breath of fresh air. It was one of the successful films set entirely online as a father searches for his missing daughter. Now in its standalone spin-off, “Missing” attempts to recreate the magic and elevate the structure Aneesh Chaganty created. Fortunately, writers/directors Nicolas D. Johnson and Will Merrick succeeded and provided an impactful and immersive thriller.

Much like its predecessor, “Missing” takes place entirely online. But instead of a father and daughter pair, we have a mother, Grace (Nia Long), and a daughter, June (Storm Reid). On paper, Grace and June have a typical mother/teenage daughter relationship, but June still hadn’t processed or fully grieved her father’s death from when she was a child. This leaves resentment and a more strained relationship that is common in most parent/teen-child relationships. In lieu of never discussing June’s father, Grace has moved on and is currently in a serious relationship with Kevin (Ken Leung) and decided to take a trip to Colombia as a pair. But when June goes to the airport to pick them up, they never arrive. Now, thousands of miles away, June has to figure out what happened to her mom overseas. But as June digs deeper, everything becomes not as it seems.

Johnson and Merrick fully embrace the “entirely online” setting while using it as a thoughtful tool to portray the characters and advance the plot. While “Searching” predominantly uses facetime and the internet, “Missing” embraces all forms of the web, including social media and forums. Moments like Grace and Kevin having typos in their messages or using Siri for everything is amusing, as true to people of Grace and Kevin’s generation. While June, in her true Gen Z fashion, takes advantage of applications like Venmo, Instagram, Snapchat, streaming websites, Google translate, and others to solve her problems. It is a natural progression to the “online film genre,” where all of these additions make the film enjoyable and allows the audience to be fully immersed. This is also supported by a strong edit which enables the story to be more engaging and less biased compared to “Searching,” where one character is researching on his own. Here, the audience is learning new information about the investigation, just as June is, which makes us feel that we are figuring out the case with her. And having the missing person be a parent and having them missing overseas in an area where American law enforcement does not have jurisdiction makes the tension all the more impactful.

Naturally, there are a lot of twists and turns that make “Missing” more of a suspenseful thriller than anything else. While it is an impactful thriller, the film is prone to being overdramatic or over the top due to the elevations in the story, particularly in the third act, when all is revealed. While there is little to discuss in dept due to spoilers, this is much more than a “parent goes missing” story, and it may be too much for the audience to embrace by the end of the film fully. Everything, from the stakes to the reveals, is bigger and tackles more mature topics than “Searching.” Nevertheless, even if the twists might not fully work for some, the shock of them is both surprising and impactful, keeping the audience on the edge of their seat the entire time.

“Missing” is yet another January 2023 success alongside the recently released “M3GAN.” Storm Reid is a commanding lead who can command the stress, fear, and determination of a young woman who is all alone trying to find her mother. The rest of the cast is also stellar (although it would be too much of a spoiler to talk about each individual member). But most importantly: Johnson and Merrick understand their audience and how they communicate. They know how an eighteen-year-old thinks and navigates the internet as much as they understand how a middle-aged individual does the same thing and incorporates that into their direction, supported by Austin Keeling and Arielle Zakowski’s editing. Therefore, “Missing” is an exciting and overall fun experience that also serves as a time capsule for how we communicate and stay connected (for better or worse). It is quite the ride and deserves to be seen in a packed theater and is a great and welcomed addition to the world of “Searching.”

<b>THE GOOD - </b>The story is impactful, with a commanding lead in Storm Reid. The expansion of websites and applications is immersive. The direction and editing are impactful and elevate the stakes.<br><br> <b>THE BAD - </b>The final act can be overdramatic and doesn't add anything completely new to the genre.<br><br> <b>THE OSCAR PROSPECTS - </b>None<br><br> <b>THE FINAL SCORE - </b>7/10<br><br>"MISSING"