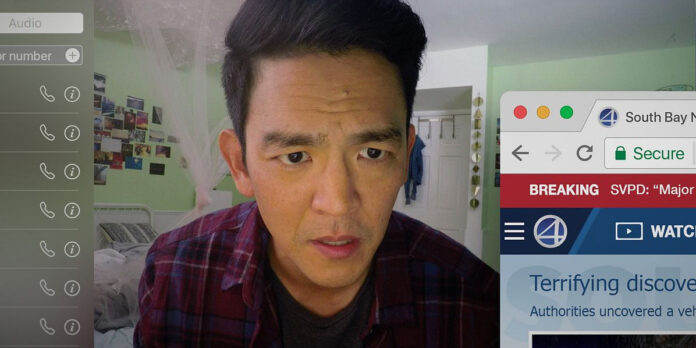 THE STORY – David Kim becomes desperate when his 16-year-old daughter Margot disappears and an immediate police investigation leads nowhere. He soon decides to search the one place that no one else has — Margot’s laptop. Hoping to trace her digital footprints, David contacts her friends and looks at photos and videos for any possible clues to her whereabouts.
​
THE CAST – John Cho & Debra Messing

​​​​Every once in a while, there comes a movie that combines inarguable skill and deft avoidance of divisive topics to create a film that nearly everyone on the planet can enjoy. These movies usually hit around Christmas or Thanksgiving – allowing families to gather around the table afterward to discuss without fear of stepping on anyone’s toes – but in “Searching,” we find a rare August release that manages to entertain and thrill, without leaving anyone behind in the process.

In Aneesh Chaganty’s “Searching,” the audience follows a man named David Kim (John Cho), a recently widowed father who is struggling to connect with his daughter, Margot (Michelle La), in the years after his wife passes away from a battle with lymphoma. One day, David is trying to get in touch with Margot to no avail, and he eventually calls her in as a missing person. The detective (Debra Messing) who works on Margot’s case asks David to figure out as much as he can about her behavior and personal life, so he goes to the one place ever dad with a 16-year-old daughter in 2018 would go: the internet.

This entire story is told on various screens. You never see the actors filmed just with a camera. You only ever see them through the filter of a computer program. Where this could become a cheap crutch, “Searching” uses it artfully and accurately, portraying the humor and horror of modern-day technology and communication we all experience. Whether it is a call that goes unanswered or a text that gets deleted before it is sent, “Searching” reveals just how many of our emotions we use when interacting with our technology. Even if it is not something that ends up getting posted or sent, the ways in which we almost behave, reveals much more than the average person might realize. However, the screens-as-canvas are not just used as a gimmick. They add another layer because it allows the audience to rarely see these characters when they do not know they are being watched, which includes a fresh psychological element, adding to the emotion of the story being told. Who are we supposed to trust, if we only ever see people when they are meant to be on their best behavior?

The movie is intensely suspenseful, with plenty of gasp-worthy moments and twists to keep the audience guessing. Gripping and mysterious, the pace of the film is so well orchestrated that audience members will not even realize they have reached the end of the story by the time they get there. Just as we lose ourselves on our electronic screens on a daily basis, this is truly a film to get lost in.

However, for those who are more keen on mysteries in general, be warned: this movie will ensure that everyone in the audience understands what happens, even at the risk of hitting you over the head with it. When there is a clue to recognize, you will recognize it, probably three or four times before the film is done explaining it to you. While this made for a good first-watch experience (especially considering its tight 1 hour 42-minute runtime), it may detract from future viewings, once you have already solved the riddle. If not, surely the emotional journey of watching a desperate father struggle to find his missing daughter will hopefully be enough to engage audiences on a repeat viewing.

While the reveals of the mystery are blunt, the rest of the screenplay works quietly in the background. It’s so refreshing to watch a movie with a diverse cast that never once calls into question their ethnicity or culture. The diversity is quietly embraced, contributing even more to the realism of the dynamics and allowing us to connect more with the characters. There are suspenseful moments, comedic moments, exciting moments and surprisingly emotional moments. All of these combined breathes life into a genre that often feels stuck in a trope-y nightmare. You would return to the movie not for its nagging mystery, but for the love and tension between all of the characters. The acting is sublime, with John Cho giving one of the most realistic portrayals of a struggling father in the digital age that I have had the pleasure of witnessing. As David’s daughter, Michelle La finds a balance between being loving and in quiet pain so perfectly. And Debra Messing adds unexpected layers to her character in the third act which re-contextualizes her entire performance.

The true value of “Searching” is not just the satisfaction of placing that last piece of the jigsaw puzzle in place; it is learning what the glue is that holds this family together. Writer/director Aneesh Chaganty’s confident debut film shows us how dangerous and confusing the internet can be without losing the more important moral of the story which is how far parents will go to protect their children. With an opening which reminds us Pixar’s animated film “UP,” it is very apparent that Chaganty is first and foremost concerned with storytelling and not cheap gimmicks. “Searching” provides a wonderful, racing story with heart, and wraps it up in a neat little bow at the end, perfect for people of all walks of life to see, enjoy, and relate to.