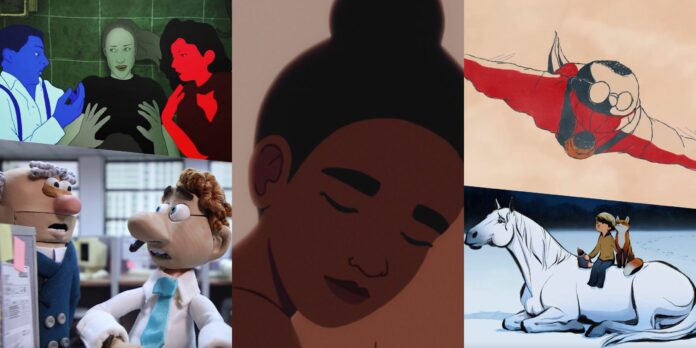 For Oscar prognosticators and those who follow the awards race closely, the shorts categories at the Academy Awards are always a conundrum. With so few precursors and little access to watch most of the shorts, it’s a wild card for predicting the nominees. Even with the longlists, narrowing the field down to fifteen shorts in each of the three categories, there’s little to tell us which direction the Academy might head in. With that massive caveat in mind, let’s break down Best Animated Short and take our best swing at predictions.

Interestingly, this year’s category lacks any offerings from the major animation studios. No Disney, Pixar, DreamWorks, or Aardman this time around. Even Netflix didn’t have a submission in the Animated category. The biggest studio in the mix is Apple TV, with “The Boy, The Mole, The Fox, and The Horse,” the adaptation of the bestselling book of the same name. Charlie Mackesy’s artwork has been a global sensation over the past three years, and Apple’s expansion on the source material, co-directed by Mackesy himself, maintains the book’s heart and quietly moving nature. It’s a gorgeous short that’s easy to imagine having passion. That, along with having the biggest studio behind it, feels like an easy prediction for a nomination.

“More Than I Want To Remember” hails from MTV Entertainment Studios and features an impactful, profoundly personal story of Mugeni, a teenager whose home in Congo is attacked, leaving her separated from her family and on the run. The short chronicles her emigration to America, all narrated by Mugeni herself. While the film doesn’t pack quite the emotional punch one might expect, it’s still a strong contender. One other shortlisted film lands the emotional hit in all the right ways. “It’s Nice In Here,” tells the story of a police shooting from two different perspectives. The gorgeous animation steeps the viewer in moments, bringing so much life to the characters. The film is an interesting blend of vibes, feeling cozy and warm at times while juxtaposing that with a brutal act of violence.

Though others on the list may not have the support of the major studios, two of the shortlisted shorts have some star power behind them. “Save Ralph,” the stop-motion animated film from director Spencer Susser, features the voices of Taika Waititi, Ricky Gervais, Zac Efron, and more. Released by The Humane Society, the mockumentary chronicles rabbit Ralph’s life as a tester for cosmetics. It’s a funny but graphic film, effectively highlighting the horrors of animal testing. The downside to “Save Ralph” is that it feels like a commercial because it might as well be one. Will that affect its chances at a nomination? I’m leaning toward yes.

The other short with star power is “New Moon,” starring Colman Domingo, who co-wrote the personal piece with his husband, Raul. Adapted from Domingo’s one-person play “A Boy and His Soul,” “New Moon” is a joyous recounting of a story of a new moon ceremony between JJ and his mother, meant to represent Colman (playing all the roles) and his own mother. The couple has been making the rounds doing lots of press, which could go a long way to snagging the nomination. It helps that the film is quite good, too.

In addition to “Save Ralph,” two other stop-motion shorts made the shortlist. “Passenger” is a quirky film from Argentina made from paper cutouts. It’s an absurdist piece about a strange bus ride and the interactions between the passengers. “An Ostrich Told Me the World is Fake and I Think I Believe It” is one of the most creative and meta films on the list, blending stop-motion and live-action in brilliant ways. A camera monitor frames the majority of the film as the animator works their magic to bring the characters to life. Winner of the Student Academy Awards, highlighting the challenging work of the animators could help win it some support, as long as they don’t mind pulling back the curtain to reveal live-action elements.

Much like “Ostrich,” “My Year of Dicks” certainly has an eye-catching title (who doesn’t want to hear this one announced in the Dolby Theater?), which may help propel it to a nomination. Based on screenwriter Pamela Ribon’s journey as a 15-year-old determined to lose her virginity, it’s hilarious and surprisingly poignant. It’s told in multiple chapters, which occasionally feels like momentum is broken, but the ending is quite strong.

“Ice Merchants,” “The Flying Sailor,” and “Garbage Man” are all hosted by The New Yorker. “The Flying Sailor” showcases the bizarre and reportedly true story of a sailor blown into the air by a massive explosion. As the sailor flies across the sky, his life flashes before his eyes. It’s a somewhat strange, abstract piece that doesn’t fully land (pun intended). “The Garbage Man” centers around a dinner table as a family shares stories of an uncle who fled Portugal and became a garbage man in Paris. The sketched animation style feels like a throwback, giving this short a slightly older feel, and the story is less compelling than other contenders.

Conversely, “Ice Merchants” is a dialogue-free, quiet film about a father and child who gather ice high up on the side of a mountain, day in and day out, gathering ice and diving to the village down below to deliver the goods. With a melancholy tone and a bittersweet ending, there’s much to love about this one. It also picked up the Leitz Cine Discovery Prize at Cannes Film Festival earlier this year.

The Israeli film “Black Slide” has beautiful 3D animation and a thrilling story about a water slide. Deceptively simple, this compelling short leaves an impact when it’s over. On the other hand, “Sierra,” over on The Criterion Channel, leans a bit more heavily into the absurd. A father and son bond over racing, and their misadventures include getting the boy’s head stuck in a tire, which they attach to the car to win a race. It’s silly, with some interestingly stylized animation.

If the Academy desires something more demented, “The Debutante” or “Steakhouse” are perfect options. Though I won’t spoil the surprise, “Steakhouse” is a grotesque story of abuse and revenge that won’t be to everyone’s tastes. It’s a somewhat upsetting watch that will likely turn some viewers’ stomachs. “The Debutante” isn’t quite as grotesque as “Steakhouse” and features fascinating experimental animation. Alternating between pencil sketches, painted sketches, and even paper cutouts, “The Debutante” is exciting to look at. The story does take a shocking and violent turn, though, which will only work for some.

“The Boy, The Mole, The Fox, and The Horse” feels strong for a nomination based on the quality, the studio push, and the phenomenon behind the film. With the promotion from Colman and Raul Domingo, “New Moon” does as well. From there, it’s iffier. The Cannes win for “Ice Merchants,” along with the sweet nature of the film, has me feeling confident about its chances. Having a film that highlights the process of animation while still telling a fun story like “Ostrich” could appeal to the branch. Lastly, I think the appeal of the title “My Year of Dicks” can push this short into the lineup. Still, anyone telling you they feel entirely assured in their predictions for this category is fooling you. It’s anyone’s game.

Below are my favorites on the shortlist and my predicted five nominees:

What do you think will be nominated for Best Animated Short Film at this year’s Academy Awards? Please let us know in the comments section below or on our Twitter account and check out our latest Oscar nomination predictions here.