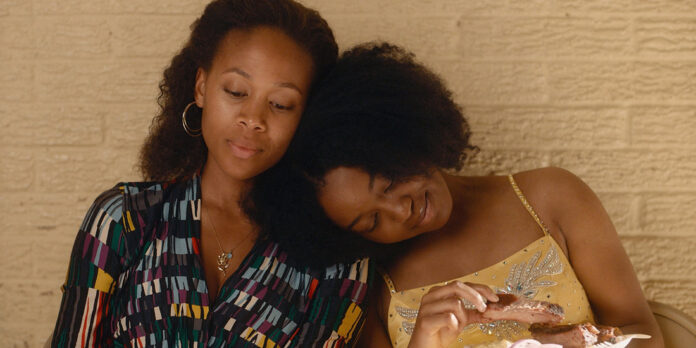 THE STORY – A former beauty queen and single mom prepares her rebellious teenage daughter for the “Miss Juneteenth” pageant.

The ability to craft an intriguing character study is always a sign of good storytelling. There’s a sense of intimacy that can be capitalized to a great degree that highlights some intriguing drama. Many templates have been provided over the years, but when the elements are right, something truly magical can happen. If commentary on current events can also be weaved into this narrative, it makes it all feel even more engaging. With a title like “Miss Juneteenth,” this film does end up claiming relevancy. Parts of its story do speak to modern conflicts, but much of it exists in formulas that are a bit tiresome. However, the performances and tone are what ultimately makes this a winning achievement.

Turquoise Jones (Nicole Beharie) struggles with the daily pressures of being a single mother supporting her family. She works hard between shifts at a local bar and as a part-time mortuary assistant. She also has an on-again/off-again relationship with Ronnie (Kendrick Sampson), the charming yet difficult father of her teenage daughter, Kai (Alexis Chikaeze). It’s the relationship with her daughter that provides most of the drive in her life, particularly as she prepares her for the Miss Juneteenth Pageant. This is an annual celebration for Black girls, named after the holiday commemorating the end of slavery in Texas two years after the Emancipation Proclamation. It also provides scholarships to the crowned winner. Having won this prize in the past, Turquoise pushes her daughter to succeed, taking a path that eluded her even while Kai fights back with other ambitions of her own.

What becomes quite apparent throughout the film is just how amazing Beharie’s performance is. She has an incredible ability to convey so much emotion just through her eyes, and she creates a powerful portrayal of a woman struggling against the pressures of life. Beharie doesn’t give into histrionics, and instead, manages to find a quiet and grounded authenticity in her choices. This isn’t to say that there aren’t some emotionally devastating moments in her time on screen – because they’re astoundingly effective when they’re delivered. However, it speaks so well to her ability to focus on somber moments and make them land with such authority. It’s a layered and complex performance that deserves to be hailed as one of the year’s greatest achievements.

The cast that surrounds her manages to provide endearing turns as well, even if the impact they provide isn’t as nearly as felt. There’s warm chemistry between Beharie, Sampson, and Chikaeze that makes their interplay quite entertaining. There’s a natural charisma that Sampson brings that easily wins you over even as he successfully showcases his struggles. Admittedly, there are some moments where Chikaeze’s performance comes across as a tad flat, but the naturalism she displays still manages to capture a spell that’s alluring to watch. Again, it’s more sharply felt in the scenes she shares with Beharie but she’s without a doubt a great asset to the film. The rest of the ensemble all have decent players, but their effectiveness is often limited to their screen time.

Despite all of these wonderful performances, there’s a quality to the filmmaking that does hold the film back. Writer-director Channing Godfrey Peoples delivers a narrative that works within very familiar tropes that have been seen before. The story of a single mother burdened with a low-income job and a fractured domestic life, while opining for the missed opportunities of youth that are now projected onto her rebellious child, is an often-seen premise. Truthfully, there’s not much in this set-up that’s subverted in a meaningful way to break free from these archetypes, and it does mean that some of the power of the storytelling gets diminished. While there are some striking moments of directing, much of it is unassuming and offers little flare.

At the same time, this shouldn’t take away from the effective moments of drama that are conveyed throughout. When those moments hit, it becomes incredibly powerful and immediately draws you in. Also, the intimacy created in this setting between these characters is sincerely felt. As much as the performances take a lot of credit for that, the method in Peoples’ craft of this story also shows a great deal of affection for the themes at play. At the center is a story about how life goals alter over time, and the mistake is not living up to them, but rather, refusing to adapt to new areas of fulfillment. It’s especially poignant for a Black community that strives for independence in a world that may claim opportunity but often impedes its spread. It’s a poignant message that resonates deeply, even more so today.

“Miss Juneteenth” is a film that isn’t without its problems. It feels so shackled to a formulaic premise that it leaves little room for subversion or unique introspection. The serviceable filmmaking also doesn’t help distinguish itself from similar stories that have been told before. At the same time, the warmth and energy-infused within this intimate character study are greatly valued and paired with outstanding performances from Nicole Beharie and the rest of the ensemble. It may not be the best example of what these types of stories offer, but it’s still one that’s well told and thoroughly enjoyable.