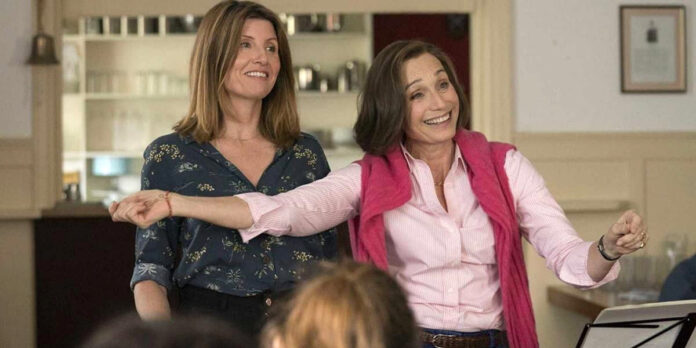 THE STORY – Following a group of women in England whose partners are away serving in Afghanistan. Faced with the men’s absences, they form a choir and quickly find themselves at the centre of a media sensation and global movement. Inspired by global phenomenon of military wives choirs, the story celebrates a band of misfit women who form a choir on a military base.
​
THE CAST – Kristin Scott Thomas, Sharon Horgan, Jason Flemyng & Greg Wise
​
THE TEAM – Peter Cattaneo (Director), Rachel Tunnard & Rosanne Flynn (Writers)

Sometimes an otherwise unspecial film just happens to come along at the right time, and in so doing, becomes something quite special. So it is with Peter Cattaneo’s “Military Wives” – which debuted at 2019’s TIFF and excited approximately no one. But here in May 2020, when the film is finally seeing release while most of the world is sheltering in place, unable to hug and kiss any loved ones who don’t live with them, “Military Wives” is looking a lot more special. It’s one of those rarest of things. It’s the movie we need right now, and it couldn’t have come at a better time.

The film takes place on a military base in England, and not long after we’ve been introduced to a few soldiers and their wives do the soldiers get called away to Afghanistan. The wife of the troop’s Staff Sergeant, Lisa (Sharon Horgan), is in charge of putting together social events for the wives left behind, and she doesn’t have the desire or the creativity to do anything other than the same old, same old. But after prodding from the overly prim and proper wife of the troop’s ranking officer, Kate (Kristin Scott Thomas), Lisa decides to ask the wives what new activities they’d like to try, and they end up starting a choir. With Lisa and Kate continually at odds as to how to run the group, will the ladies ever sound good enough to perform at the annual Festival of Remembrance at the Royal Albert Hall? Does it matter?

“Military Wives” is inspired by the real-life Military Wives Choirs that started in 2010 and gained prominence through an appearance on the television series, “The Choir”, so we pretty much know the choir is going to be successful. Certainly the film’s screenplay, written by Rachel Tunnard and Rosanne Flynn, couldn’t be any more formulaic in how it parallels Lisa and Kate’s journey to friendship with the choir’s journey to greatness. But, oh, what it does from within that formula, and how well it does it! The women on the base may be only sketches on the page, but the actresses who play them color their inner lives so vividly that even the ones with the most minimal screen time feel like real people, ones that we know and want to see succeed. And while the script may never veer from the expected, Cattaneo knows just the right amount of pressure to apply to the most nakedly, emotionally manipulative scenes so that they don’t come across as overly sentimental. He also knows that trying to build tension around the big performance is silly, so, instead, he builds the emotion surrounding it – of course the performance will go well, but how will the ladies feel about baring their souls and their private lives to the nation?

All this would normally amount to nothing more than a pat on the back, a “well done,” and “on to the next,” but when combined with the timing of its release, the themes of “Military Wives” hit a little bit harder. Watching these women come together and find strength, solace, and friendship in each other, in a time when most of us can’t do so in person, is an overwhelmingly emotional thing. It’s a reminder that family is what you make it, and that a good community comes together to support its most in-need members when the time calls for it. It’s here that Cattaneo’s light, but steady hand as a director, reaps the most rewards. It’s clear that “Military Wives” is manipulating us, but we welcome it; we welcome it because the performances feel real and grounded; we welcome it because there’s just the right amount of humor to distract us from the tears; we welcome it because we need it. We need the emotional release that this film provides so expertly. “Military Wives” has no grand ambitions, but it’s exactly that quality that makes it work so well, perhaps especially for those people who go into it with their guards up.