“THE ROADS NOT TAKEN” 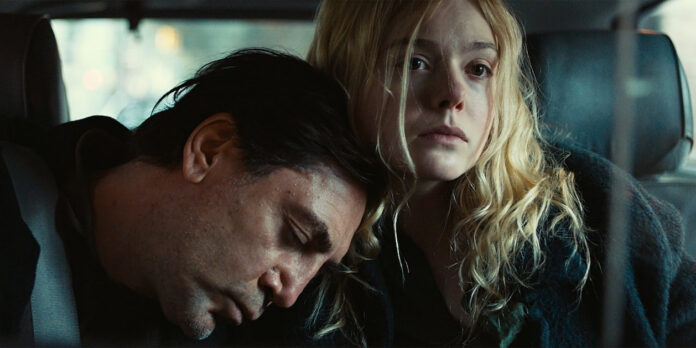 THE STORY – The story follows a day in the life of Leo and his daughter, Molly as she grapples with the challenges of her father’s chaotic mind. As they weave their way through New York City, Leo’s journey takes on a hallucinatory quality as he floats through alternate lives he could have lived, leading Molly to wrestle with her own path as she considers her future.
​
THE CAST – Javier Bardem, Elle Fanning, Laura Linney & Salma Hayek
​
THE TEAM – Sally Potter (Director/Writer)
​
THE RUNNING TIME – 85 Minutes

One of my greatest fears in life is losing my grasp on reality with old age. To be so in control and to lose it through no fault of your own is something that I often try not to think about but I know it is a potential reality for us all. Dementia is a real condition that impacts millions of people every year and seeing it depicted on film has always had a profound impact on me when executed correctly. There is a relatable sadness to mental illness that audiences are beginning to understand and accept more and more. There was a real opportunity with “The Roads Not Taken” to use an uncommon narrative device to tell a story that could resonate for millions all over the world. Director Sally Potter (“Orlando” & “The Party”) draws on her interests in parallel interlocking universes and her own personal experiences with the condition to deliver a movie that is well performed by the actors involved but is lacking in focus and momentum to be considered well executed.

“The Roads Not Taken” is a story that takes place over 24 hours from the perspectives of Leo (Javier Bardem) and his daughter Molly (Elle Fanning). Leo is suffering from a mental illness (which is never confirmed to be dementia but has recognizable symptoms) that has impacted his motor skills, speech, and thought process. An immigrant from Mexico to the United States, he now lives alone in New York City when on this particular day his daughter pays him a visit. Never fully present and constantly fading in and out, Leo drifts between his present with his daughter and ex-wife (Laura Linney) and his past, encountering his secret lover Dolores (Salma Hayek) in rural Mexico within an alternative reality of what his life could’ve been.

“The Roads Not Taken” has an intriguing setup and two high caliber actors in Javier Bardem (who is no stranger to playing roles such as this in movies like “Biutiful” and “The Sea Inside”) and Elle Fanning. Both deliver expected solid performances (I really wish Salma Hayek and Laura Linney received more screentime to make such an impression), however, the direction by Potter is lacking a much-needed level of coherence and momentum in the early going, to get us emotionally invested in the story. As we watch Leo stumble and mumble his way in the present, we are transported to his past and sometimes to several “what if” scenarios, all playing out inside of his mind. It’s a question many of us contemplate towards “the end” as we wrestle with our life-choices, thinking on what might’ve been had we gone down another road. Had the story done more to set up who Leo was before he started deteriorating, perhaps we could’ve developed a strong bond with him, his love for his daughter, and seen more through his eyes before it all became undone. Instead, what we’re left with is a frustrating and aimless viewing experience, unnecessarily confined to a 24-hour window in one man’s life.

Thankfully, the film is less than an hour and a half long but one has to wonder what could have been, what road could this movie have gone down had it been a bit longer, with more time for us to go on this unique journey with Leo and a more relatable one with Molly. Sally Potter’s experiences in the writing this movie and her storytelling ambition should not go undiminished. This should’ve been a transcendent cinematic experience, revealing deep truths about the human condition but instead much like Leo’s memories, will be sadly forgotten.