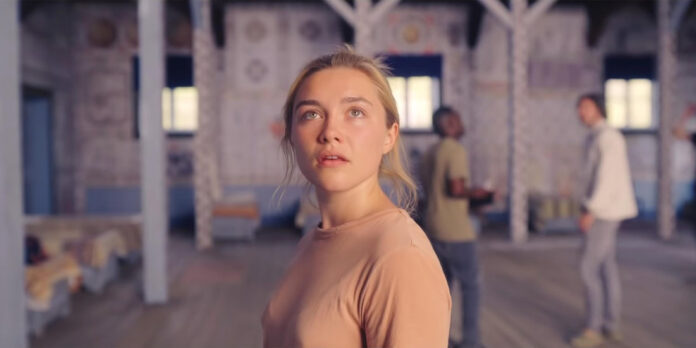 THE STORY – With their relationship in trouble, a young American couple travel to a fabled Swedish midsummer festival where a seemingly pastoral paradise transforms into a sinister, dread-soaked nightmare as the locals reveal their terrifying agenda.

Coming off the heels of his widely praised horror debut film “Hereditary” last year, writer/director Ari Aster did not wait a single second to expand upon what he already gave us with his sophomore effort, “Midsommar.” Bigger in scope, its runtime, its ensemble, and its exploration of its themes, Aster’s nightmarish breakup film is an unnerving mixture of Ingmar Bergman’s storytelling, Stanley Kubrick’s subliminal artistry and Lars Von Trier’s audaciousness. If you were to take “The Virgin Spring,” “Antichrist,” “The Shining” “The Wicker Man” and throw in Aster’s own “Hereditary,” you might get something that closely resembles “Midsommar” but even that would be a disservice in trying to describe this film due to how original and unique Aster’s film feels and presents itself in today’s current horror movie landscape. It provides us with something that feels otherworldly yet relevant for a new generation, all the while firmly establishing Ari Aster as a filmmaking force not to be reckoned with.

Dani (Florence Pugh) has just been through an unspeakable tragedy which has left her relationship with her boyfriend of 4 years, Christian (Jack Reynor) in question. Wanting to break up with her but also feeling obligated to be there for her during this trying time, Christian invites Dani on his trip to rural Sweden along with his friends Josh (William Jackson Harper) and Mark (Will Poulter). Their Swedish friend Pelle (Vilhelm Blomgren) has invited them all to partake in the Midsummer, which for his village only occurs once every 90 years for 9 days. Hoping to relax and spend some time with Christian, Dani soon realizes that the festival is filled with disturbing rituals and hidden agendas from the locals which may or may not threaten them.

One of the joys of experiencing “Midsommar” is how intricately layered it is from a technical standpoint. There are tiny details hidden in nearly every frame, as Aster, his cinematographer Pawel Pogorzelski and production designer Henrik Svensson utilize the sets and the camera to convey emotion, character and slowly reveal details about the story. Sometimes, our eyes deceive us and we’re not sure what it is we’re exactly seeing on screen putting us in a hallucinogenic state of mind that is not too dissimilar from the young characters themselves. It’s meticulously crafted in such a way that it will most likely inspire a whole new generation of horror movie lovers to pick up a camera and start making films. This also translates to the editing, with its jarring yet precise match cuts and patient long takes which Aster holds to unbearable effect, allowing the dread and anxiety to sink in with every second that passes by. The Haxan Cloak also provides strange, haunting and grandiose melodies through the film’s score, which perfectly sets the tone and transports us to the beautiful countryside of Sweden or to a macabre hellscape soaked in daylight. Whichever you prefer.

Aster’s screenplay is also layered in its exploration of grief, loneliness, the need for emotional support and the strength required whether to move on or not. Some of these themes were already touched upon in “Hereditary,” but with a larger canvas, Aster is able to manifest his deepest and darkest ideas to heightened theatrical effect, through drug-induced hallucinations, pagan rituals and through Dani’s multiple conflicts both internal and external. She’s at war with herself, with her boyfriend, with the world, trying to cope with unendurable tragedy and helpless to find support. There are multiple characters writing their thesis in “Midsommar” and you can’t help but feel Aster is also writing his own (as I’m sure many others will use this film as inspiration to write their own as well). In our darkest times, we try to find light and some semblance of peace, so that we can continue to move on. “Midsommar” presents this through its visual design which is some of the most unique I’ve ever seen in any film, ever. Bright, blown out whites, colorful flowers, vast evergreen hills, peaceful and angelic smiles. It’s all here and yet, we the audience and Dani, cannot find peace. We are constantly on the edge, waiting for the other shoe to drop, wondering if it’s all going to go to hell. And surely, like any good horror film,  it does. However, not in ways that you would expect and without getting into spoilers, that is the genius of Aster’s latest: its ability to subvert and even exceed expectations by how it thematically handles its on-screen violence and disturbing imagery.

Florence Pugh is a queen and I’m not just saying that based on her outstanding performance here. Over the past two years, she has proven to be a multi-talented actress, willing to take on various roles with degrees of difficulty that other actresses twice her age are usually taking on. At 23 years old, there’s no doubt in my mind that she is one of the most exciting talents to keep an eye on. Look no further than Aster’s first long take in the early opening minutes of the film before the credits even pop up on the screen. The camera stays close on Pugh’s face as she has a phone conversation with her despondent, distant and gaslighting boyfriend Christian. She goes through a wide range of emotions, never once missing a beat or failing to lure us into Aster’s story. And that’s the key. For all of his technical craftsmanship and layered subtextual writing, the film would not work without the strength of Pugh’s tortured performance. It’s not only the best work of her career so far but also a clear sign of the brilliance she still has left to show.

“Midsommar” is many different things at once and will surely spark a ton of debate. It’s a relationship drama, a cult horror film and a dark comedy (Mostly due to the self-aware oddities which befall onto the characters and Will Poulter’s scene vaping stealing performance) all rolled into one. With its long runtime of nearly two and a half hours, Ari Aster jams his follow-up film to “Hereditary” with an endless dissertation on despair, self-worth, inner peace, and home. Some will prefer it to “Hereditary” for certain reasons, while others will prefer this to “Hereditary.” Both are excellent films that have the power to shock, engage and disturb you on an intellectual and emotional level. They may not be “scary” per se (filled with jump scares) for modern moviegoing audiences and many will see this as a punishing and challenging sit if they’re expecting a horror blockbuster on the level of say “It” or “The Conjuring.” However, what they do provide is something that I would argue is much more substantial than the occasional genre thrills and that’s heart. Both of Aster’s films are deeply personal and they each display those ideas and emotions outwardly through the performances, the writing, and the filmmaking. Sometimes you may not see it and but you will always feel it. It’s because of this introspective approach to his storytelling that I believe Ari Aster, now with two proven films under his belt, is on his way to becoming one of the great filmmakers of our time.