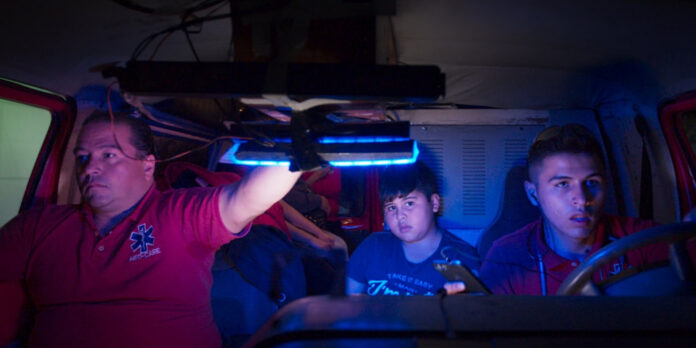 THE STORY – In Mexico City’s wealthiest neighborhoods, the Ochoa family runs a private ambulance, competing with other for-profit EMTs for patients in need of urgent help. As the Ochoas try to make a living in this fraught industry, they struggle to keep their dire finances from compromising the people in their care.

​At once a riveting thriller and a touching family saga, “Midnight Family” is one of the year’s most engaging documentaries.

In Mexico City, there are fewer than 45 ambulances for a population of 9 million. As a result, a loose confederation of private ambulance drivers has formed. “Midnight Family” follows one such family as they navigate the “Nightcrawler”-esque world of corrupt cops and competing drivers to try and make a living rescuing sick people. Director Luke Lorentzen embedded himself with the real-life family, who includes father Fernando and his sons Juan, Manuel, and Josué. They spend every night on the streets. Money is tight and tensions are high. Lorentzen points his camera unflinchingly at the family for three straight years though and showcases the good and bad.

Lorentzen and his co-editor Paloma López amazingly whittles down three years of footage to feel as though the film only covers about 48 hours. The incredibly sleek and cinematic camerawork heightens the experience, cranking a fly on the wall look at a hard-working family into a full-fledged thriller. This unflinching access allows us to see the moral ambiguity of the job at hand. Yes, the people here are providing a necessary service. But their actions ask us to question whether their decision making is always ethical. After all, they make it clear they are in this as a business. Their near-constant work proves expensive, both in materials and in bribes. But even as they make sometimes ethically questionable decisions, the characters all have unique identities and prove extremely likable. You want them to succeed. They do care about the infirmed. In one sequence, for example, they become enraged at an abusive father. When a passenger dies, they end up visibly shaken.

The glimpses at life outside of work are equally engaging, from Juan’s moderately successful attempts to woo a woman via phone to Josué’s attempt to complete his studies while staying awake at night, to their attempts to find food to eat for under $5 (Hint: it involves lots of tuna). The storytelling here is intimate to a fault, however. The film is so determined to take us on a ride with this one family, that it feels as though it misses an opportunity to explore larger themes. Certainly, the fact that there is a need for healthcare reform in Mexico is self-evident from the concept. And that in itself provides the film relevance towards United States audiences. But it feels as though the film could have gone deeper into the broader subject instead of opting for merely relaying this one family’s entertaining adventure. Ultimately, that keeps the film in the good, not masterful category. Still, “Midnight Family” will likely prove more entertaining than most of the year’s blockbusters. It’s fun and exciting and keeps you on the edge of your seat. It’s a love letter to hard work, and well worth seeing even if frustratingly slight.