Our Reactions To The 25th Annual SAG Awards 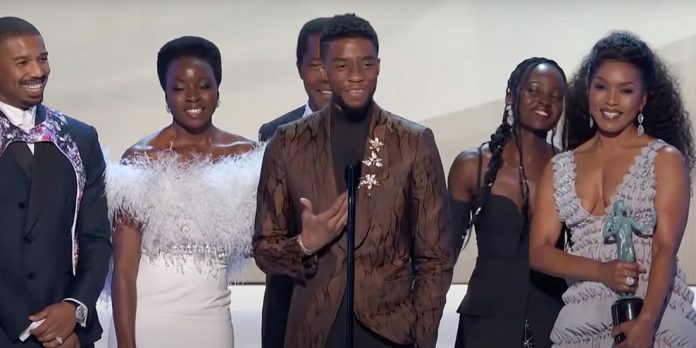 ​The trend of rewarding popular names and widely seen, profitable films this award season continued at the Screen Actors Guild Awards last night. The 25th annual ceremony leaned into conventional wisdom yet brought a few surprises to keep the race mostly interesting in a few major categories. So often, SAG is regarded as the paramount predictive pillar during award season, because it has crossover with the largest branch in the Academy, the actors. Back in the old days, if one did not receive a SAG nomination, their chances at winning the Oscar were over. Conversely, too, if an actor wins at SAG, they became exponentially more likely to win the Oscar. SAG is supposed to clue us in on what’s really going on with voters.

Winning the individual awards and the Cast Ensemble award has historically been in a performer/film’s favor in terms of their path to the Academy Awards. However, since SAG merged with AFTRA and AMPAS decided to vote for Best Picture through a preferential ballot, I would argue winning the Cast Ensemble award holds less weight than it used to. Statistically speaking, 28/32 of the individual SAG winners from the 2010 to 2017 went on to win the Academy Award in their categories (Viola Davis, Tommy Lee Jones, Idris Elba, and Denzel Washington won SAG but not the Oscar), whereas only half the cast ensemble winners have gone on to win Best Picture. “The King’s Speech,” “Argo,” “Birdman,” and “Spotlight” won both the SAG Cast Ensemble and the Best Picture Oscar. “The Help,” “American Hustle,” “Hidden Figures,” and “Three Billboards Outside Ebbing, Missouri” only won the SAG Cast Ensemble award, not Best Picture.

Aside from those trends, something else was at work last night: since the Academy ushered in the idea of a Best Popular Film award, there has been much discussion about the way the industry balances rewarding mainstream films over arthouse productions. This year, it feels as though the pendulum is swinging hard in the direction away from “Moonlight” and “The Shape of Water.” The winner of the cast ensemble award is “Black Panther,” which received a total of 7 Oscar nominations. This win is especially triumphant because the film received no individual SAG nominations. Unfortunately, becoming the first comic-book, superhero movie to earn a Best Picture nomination is probably the reward for the film come Oscar night. “Black Panther” is likely a similar SAG winner as “The Help” or “Hidden Figures,” an accessible film with a plethora of well-known actors that have been financially successful.

I would end the evaluation of this category and SAG win as having little effect on the Best Picture race, other than providing yet another failure on behalf of “A Star is Born” to translate its phenomenon into tangible industry success. Bradley Cooper’s directorial debut may be looking at a sole win for Best Original Song at the Academy Awards. On a side note, many were predicting “BlacKkKlansman” to win the Cast Ensemble award. Losing last night does not strengthen its chances at Best Picture at the Oscars, which has been clearly defined as Roma v. Green Book.

Though not necessarily in a “popular” or mainstream film, Glenn Close dug up a win for “The Wife” using her name recognition (Cruella de Vil, anyone? Who doesn’t remember her from “Fatal Attraction?”) and long history as an actor, working in movies, television, and miniseries. With the SAG secured, Close now is perfectly positioned to finally win an Oscar, after seven nominations. Though Olivia Colman will still easily win the Best Actress BAFTA for “The Favourite,” Close has all but decimated challenges from her or Lady Gaga in “A Star is Born.” On the other hand, Rami Malek’s Freddie Mercury in scandal-ridden “Bohemian Rhapsody” also wiped out opposition from Christian Bale’s shape-shifting portrayal in “Vice” and Cooper’s soulful bid for “A Star is Born.” Malek should have no problem now riding the film’s mainstream appeal and box office gross to Oscar gold, unless the backlash against the film’s handling of LGBTQ representation and embattled filmmaker, Bryan Singer, continues to grow.

In another rebuke to critics and controversy and a win for crowd-pleasing films, Mahershala Ali took his second SAG award for Best Supporting Actor in “Green Book,” only two years after winning the same category for “Moonlight.” Given he’s won both the Critics Choice and Golden Globe awards, and he has a pristine reputation among co-filmmakers who keep digging their own public relations graves, Ali will be an easy choice for Academy members who love “Green Book” but do not want to vote for it in other categories, which would inevitably result in a controversial pushback from younger, woker generations.

​The main event of the SAG awards last night was the Best Supporting Actress winner. As a double- nominee for “Mary Poppins Returns” and “A Quiet Place” last night, Emily Blunt miraculously won for the latter film, despite being snubbed by the Academy for both projects just last week. From the time the SAG nominations were announced without the critics’ favorite, Regina King for “If Beale Street Could Talk,” on the shortlist, we all should have known this category would have a weird ending.

King was naturally assumed to be the frontrunner for the Oscar after winning essentially every critics group for “If Beale Street Could Talk,” but then she was snubbed by the SAG awards for a nomination in December. As I mentioned earlier, back in the days when I started covering the Oscars, missing a SAG nomination would not allow an actor to advance in winning the Oscar. Many found ways to shrug off the snub, essentially saying “stats are meant to be broken.” King followed that by winning the Golden Globe and Critics Choice awards. Then she missed a nomination at BAFTA, the other one of the only two precursors that have crossover with voters who participate in the Academy Awards. “If Beale Street Could Talk” received two other BAFTA nominations, so her omission wasn’t due to a lack of availability for voters to see her work. Finally, the Oscar nominations come around, and “If Beale Street Could Talk” severely underperformed, netting only three nominations, when a month ago, most had it predicted for double that. Making matters worse for King is, the other four women nominated with her in Best Supporting Actress are in Best Picture nominees that either got 8 or 10 nominations total. (That shows a clear well of vigor behind these films, compared to her film with 3 nominations, not in the Best Picture lineup.)

And here we stand, with a SAG winner not nominated for the Oscar, possibly providing Regina King the break she needed to continue on to the win the Oscar. At the very least, Blunt winning the SAG opens up discussions about the future of this race.

A week ago, I would have said, predicting someone to win the Academy Award who was snubbed by SAG and BAFTA would have been shameful and biased. But now that Blunt beat out Amy Adams, Rachel Weisz, and Emma Stone (all of whom got the five of the major televised award nominations an acting winner typically accomplishes) for the SAG award, none of the three have an opening to surmount the groundswell of passion Regina King has. Gold Derby covered the race last night and characterized it as having a similarity with the Best Supporting Actor race in 2015, where Sylvester Stallone emerged as the early frontrunner with the same wins as King, SAG was awarded to an Oscar-snubbed Idris Elba, and the contender who won the BAFTA, Mark Rylance, went on to clinch the Oscar. Many hypothesize Rachel Weisz will win the BAFTA, which makes her the most formidable challenge against King.

Going into the awards last night, the majority of pundits were predicting Adams to begin her “overdue” narrative and win for the surprisingly beloved “Vice.” Unfortunately for her, Adams lost the Best Supporting Actress SAG as well as the Best Actress in a TV Movie/Miniseries for her harrowing turn in “Sharp Objects.” Adams has now lost two Golden Globes and two SAG awards in a matter of three weeks. Recovering from that may be next to impossible unless she wins the BAFTA award. The British Academy has given her seven nominations – even one for “Big Eyes” in 2014 – but still, Weisz, who also have never won there, should easily appeal to that group of voters in a more personal way.

Blunt’s win should be less surprising in retrospect. As I stated earlier, the SAG awards leaned into the “popular” films like “Black Panther” and “Bohemian Rhapsody;” the box-office smash of “A Quiet Place” fits aptly in with that group of films. The movie came out very early last year, which means voters had ample opportunity throughout the year to see it. In addition, Blunt having two nominations from the SAG voters speaks volumes about their adoration for her. It makes sense within the isolated SAG awards that she won, but it confuses the rest of the predictive season for the category at large. Had either Weisz or Adams won this last night, they would probably have become the front runner for the Oscar. But by Blunt winning, it almost inoculates King’s snub, in terms of momentum.