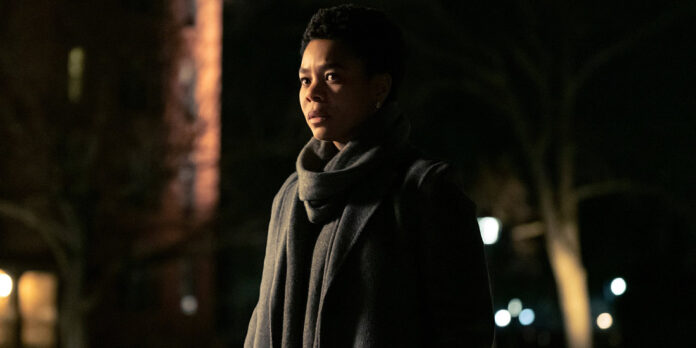 THE STORY – At an elite New England university, built on the site of a Salem-era gallows hill, three women strive to find their place. Gail Bishop (Regina Hall), as “Master,” a dean of students, discovers what lies behind the school’s immaculate facade. First-year student Jasmine Moore (Zoe Renee) confronts a new home that is cold and unwelcoming and professor Liv Beckman (Amber Gray) collides with colleagues who question her right to belong. Navigating politics and privilege, they encounter increasingly terrifying manifestations of the school’s haunted past and present.

​​In “Master,” Ancaster College seems like the last place a college student would want to go. Sure, two presidents (almost three, but he had to settle for Harvard when he couldn’t get in) and countless senators have gone there, but there is a deep evil in the institution. If you’re one of few Black students or faculty members, the stares and whispers are all around. Even though the packets boast diversity, you’ll never quite feel like you belong.

Mariama Diallo’s “Master” takes on racism in academia through the horror lens. Ghost stories and the things that go bump in the night aren’t needed to raise the hair on your neck, though those elements are here too. Focusing on the experiences of three Black women, Diallo highlights microaggressions and experiences that are all too common.

It’s the start of the school year, and Jasmine (Zoe Renee), a bright student who was valedictorian in high school, is one of few Black students on the elite New England campus. But she’s determined to make her mark, and nothing can stop her, not even when she’s assigned to live in a haunted room. In that room decades ago, a Black student died by suicide. The whole institution is actually wrapped up in a ghost story. Jasmine learns about Margaret Millett, a witch who died centuries ago, and folklore says that she takes a freshman’s soul at 3:33 a.m. on the anniversary of her death.

On the other side of campus, Gail Bishop (Regina Hall) is settling in as the school’s first Black “Master,” or dean of students. Her job is to essentially help boost the school’s diversity image, which will prove to be a challenge as the year goes by. Liv Beckman (Amber Gray) is a professor hoping to reach tenure, but the committee seems adamant to hold her back due to her “light” publishing history. The two women are close and have each other’s back, mainly because they both know it feels like not belonging.

As the story unfolds, we see the school’s deep-rooted racism reach the surface. Both Jasmine and Gail have to withstand microaggressions from their peers, who constantly compare them to Beyoncé, President Barack Obama, the Williams sisters, and more. When Jasmine attends a college party, the white men stare at her dancing, and then when Chop Mui’s “Black AGAVE” comes on, they dance around her and scream the n-word without hesitation. It is everyday things too: an alarm rings as Jasmine is leaving the library, and the librarian doesn’t believe that she’s not hiding a book in her backpack, or she can’t get into a party without her white friends. The stares and looks she receives make one feel like the walls are closing in on them as shots are tightly framed. Later in the film, there is a “LEAVE” message carved into Jasmine’s dorm room door along with a noose, and one night a cross burns. Diallo wants you to feel uncomfortable because everything about this place is a nightmare.

As Gail gets her new home on campus sorted, she finds reminders that her white predecessors do not want her there. Liv also constantly feels like she can’t call this place a home. And when Jasmine files a dispute over a poor grade Liv gave her on a paper, it provides the tenure committee another reason to shut down her application. Anchored by three great performances, especially Hall, these women show their struggles and their fight just to live their lives.

However, the film’s supernatural elements don’t make as much of an impact. Jasmine begins to lose sight of what’s real and fantasy as she has nightmares and sees ghosts all around the school. Gail’s home is also causing plenty of problems: maggots are found everywhere, she hears ringing and sees the ghost of a Black maid who once lived in the house. There is also a twist toward the film’s end that doesn’t get nearly enough time to be explored thematically or on a character level. But even with some of these setbacks, Diallo has done her job well to make you never want to step foot near an academic setting.

“Master” is best when it leaves the spooky ghost stories behind and focuses on the real horrors of society. With a strong script that is mainly rooted in reality and compelling performances, you’ll need some time to process what you’ve seen. Diallo has already cemented herself as one to push the envelope, and I’m excited to see what’s next from her.