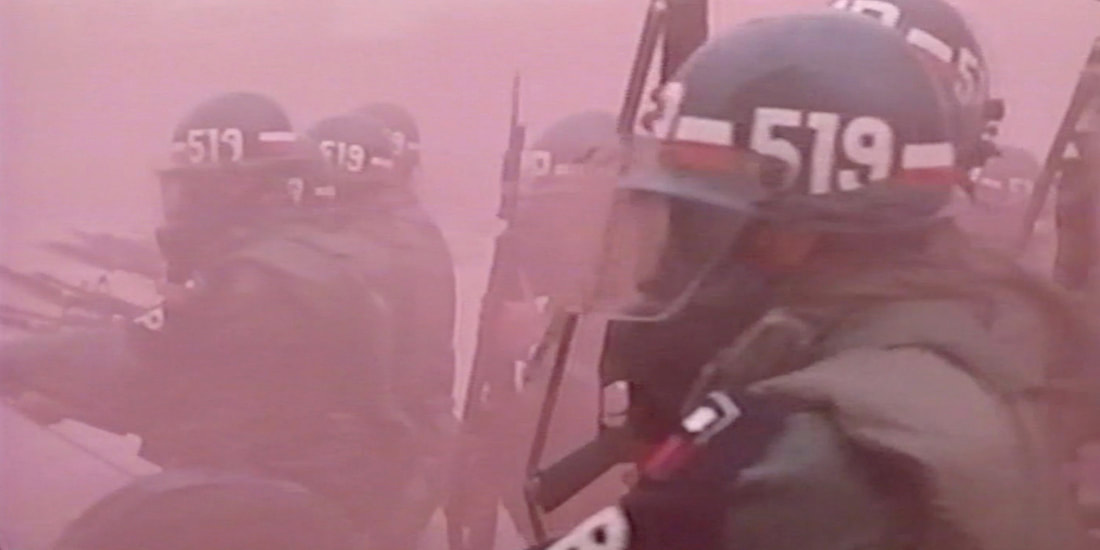 THE STORY – Riotsville, USA is a poetic and furious reflection on the reaction of a nation’s citizens and institutions to the rebellions of the late 1960s. This artful, riveting documentary consists entirely of archival footage that was shot by the United States military or appeared on broadcast television. Director Sierra Pettengill shifts our historic gaze from the rebellions in Chicago, Newark, and Detroit, focusing on unearthed military training footage of Army-built model towns called “Riotsvilles,” where military and police were trained to respond to domestic civil disorder.​

Everyone knows the saying about repeating history and those doomed by their own subsequent ignorance. Unfortunately, it’s practically an American tradition to not only refuse to learn from our mistakes but to cling to outdated, ineffectual methods and troubled folk legends of the past as a point of pride. “Riotsville, USA,” the new documentary by Sierra Pettengill, is a striking, and at times infuriating, visual essay centered around the turbulent 1960s. While the film itself doesn’t explicitly draw a direct line to similar troubles of our modern era, it’s difficult to watch the footage presented without comparing the outsized and ineffectual reactions of the federal government and local law enforcement to those of our own in the present.

The documentary is constructed of a patchwork of archival footage from the late 1960s; a mixture of professionally shot videos and news clips makes up the film’s entirety. The footage is presented in its original form besides the occasional musings of a voiceover narrator and brief explanatory title cards. Centering the film are videos of so-called “Riotsville” cities – model towns built on army bases that were used for law enforcement to practice suppressing the ubiquitous riots, protests, and demonstrations found in many American cities of the time. Conclusions are drawn and inferred without putting too fine a point on them, and the suspect implementation and effect of supposed law and order is laid out before the audience.

The peeks into the titular model cities are the most inherently fascinating parts of the film. These were clearly not only meant to be training facilities for the soldiers interacting in the faux-mayhem; they were also used for authority figures to observe the militaristic tactics used from a nearby grandstand. Indeed, these exercises are shown to have been a perverse source of entertainment for those spectating, with the dramatic scenes accompanied by titters of laughter and awkward applause as if they are watching a middlebrow circus. And while the footage shows an odd dichotomy between the half-hearted violence being play-acted and the banal reaction of the crowd, the real-life footage that surrounds them and makes up the rest of the documentary shows how these make-believe demonstrations aided those in power in enacting real-life tactics of brutality and violence on citizens demanding change.

The film’s most subtle but powerful achievement is how it quietly connects the actions of the past to the woes of the present. The tension and strife that became practically expected for many urban residents in the 1960s led to a good deal of governmental confusion and handwringing as they attempted to find both the reason for the uprisings and a helpful solution. As “Riotsville, USA” shows, rather than seek to enact lasting change, the only proposal that actually reached fruition was a nationwide increase in police spending and expansions of military-grade technology and weaponry being used on American citizens in their own hometowns. Of course, these are the same retaliatory methods carried out by those in power today.

Taking the observations imparted by the documentary one step further, one can see how the paranoia and fear of its own people that authority figures felt during the time depicted in the film has led to a normalized preemptive militarization of police forces even in times of relative calm. The over-the-top reaction of the 1960s has become the expected standard of the present day, and the refusal to even consider using the defense-appointed funds to enact social change instead remains as frustrating now as ever.

Unlike most politically-tinged documentaries, this one’s commentary is light. For the most part, the footage is laid out for reflection and can speak for itself. Occasionally, the stark archival footage is contrasted with somewhat-experimental editing and obfuscated images, underlined by literary, poetically minded narration. These very different documentarian techniques can occasionally lead to a whiplash effect, but the variation in style and tone offers up a nice change of pace from the unrelenting onslaught of footage from yesteryear.

“Riotsville, USA” uses forgotten and unearthed memories of the past to evoke comparisons to the present quietly. It never draws explicit attention to the dark similarities between the two eras. Still, the history is presented in a chilling manner that can’t help but feel like a lesson that our country is happier to ignore.

<b>THE GOOD</b> - A chilling and surprising piece of hidden history, "Riotsville, USA" shows banal and shocking footage, demonstrating the violent, reactionary ways our country deals with social unrest. It never makes it explicit, but the parallels and comparisons that can be drawn between the past onscreen and our present-day life are clear. <br><br> <b>THE BAD</b> - The contrasting styles of presentation of archival footage in its original form and more lyrical, experimental voiceover commentary can be a bit whiplash-inducing, but the occasional diversions from the past can be something of a relief.<br><br> ​ <b>THE OSCAR PROSPECTS</b><a href="/oscar-predictions-best-international-feature/">Best International Feature</a><br><br> <b>​THE FINAL SCORE</b> - 8/10"RIOTSVILLE, USA"