“MARVELOUS AND THE BLACK HOLE” 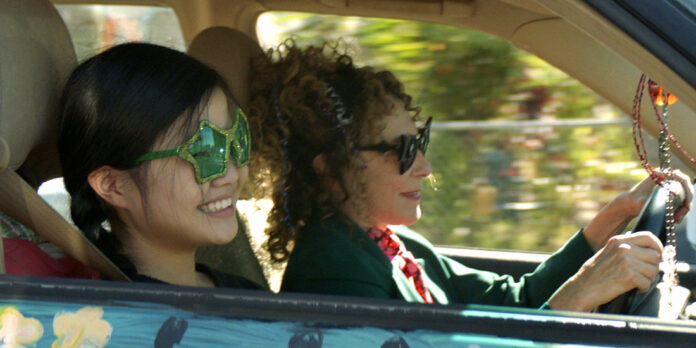 THE STORY – Thirteen-year-old Sammy is struggling to cope with the death of her mother. After she is caught vandalizing one of her school’s restrooms, her father, fed up with her wild behavior, enrolls her in a summer course—if she fails, she’ll be sent to a boot camp for delinquent youth. After storming out of her first class, Sammy meets Margot, a surly magician. Margot forces Sammy to be her assistant for a performance, and although Sammy seems uninterested, she seeks Margot out after the show and asks to become Margot’s pupil. Margot agrees, and as their unlikely friendship grows, we learn that she and Sammy understand each other more than they expected.

​​​​​Kate Tsang’s feature directorial debut starts off showing the aftermath of a vandalized school and the thirteen-year-old teenager who did it. Sammy (a breakout role for Miya Cech) has a black-eye on her face from a three on one fistfight, letting us know right off the bat, that she is not your typical protagonist for a coming-of-age film. Tsang’s choices as a director are also not typical for this type of film either, as she displays an erratic style at first that is as abrasive as her protagonist. However, much like Sammy’s journey, Tsang’s film transforms by the end into something profound and wholly satisfying, making this one of the best discoveries at this year’s Sundance Film Festival.

Sammy is dealing with her mother’s death and her father (Leonardo Nam) is getting ready to re-marry, much to her disdain. Frustrated with her acting out, he enrolls her in a summer entrepreneurial course and if she fails, he will then send her to a boot camp for delinquent children. Angry, sad and filled with uncontrollable impulses, Sammy unexpectedly meets a magician named Margot (Emmy-award winning actress Rhea Perlman), who has Sammy come on board as her assistant for a magic show. Finding the direction and focus she needs in her life, Sammy becomes Margot’s protegé and the two’s friendship begins to grow as they realize that they have more in common with one another than they initially thought.

Filled with dark ideas such as brutally sawing her future stepmother in half during a magic performance, Sammy’s attitude is clouded by grief, confusion and anger. Miya Cech is an absolute sensation here as the troubled young teenager who finds a creative outlet for processing her grief. Her chemistry with the always fabulous “Cheers” star Rhea Perlman makes for such an unlikely and winning pair that such cynicism is easy to overcome in Tsang’s debut. Perlman’s enthusiasm and radiant energy perfectly breaks down Cech’s rough exterior and warms all of our hearts in the process.

Most impressively, though, is Tsang’s screenplay and direction, which never forgets to focus on character mechanics, providing the heart of a good story. When the film’s script starts to become too whimsical for its own good, she re-introduces the moving motivations that are pushing her lead character forward. She does this by having Sammy share a scene with her sister or her father, who are each processing their own grief differently. And later on, the more character-based scenes with Margot reveal more layers to the duo’s relationship. Although there will be inevitable plot comparisons to some aspects of Netflix’s animated film “Over The Moon” due to their close release dates, don’t let that fool you. The two share very few similarities, as Tsang’s story keeps its characters grounded, focusing on their complex internal struggles in a world that can be unfair and we wish we could change it all with a little bit of magic.

Creative and inspired uses of animation, black and white cinematography and jump cuts show that Tsang has a knack for stylish filmmaking and holds immense promise for the future as a storyteller. “Marvelous And The Black Hole” is a confidently told coming-of-age story presented from a unique perspective by an excitingly new filmmaker. It’s the kind of discovery that makes the Sundance Film Festival such a special place to debut new films from new voices and once which I hope more audiences will continue to find and embrace.