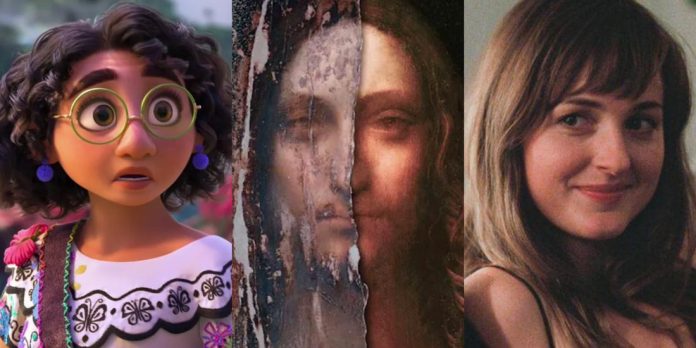 The Academy of Motion Picture Arts and Sciences have announced the feature films eligible for consideration in the Best Animated Feature Film, Documentary Feature and International Feature Film categories for the 94th Academy Awards.

BEST ANIMATED FEATURE FILM
Twenty-six features are eligible for consideration in the Animated Feature Film category for the 94th Academy Awards.  Some of the films have not yet had their required qualifying release and must fulfill that requirement and comply with all the category’s other qualifying rules to advance in the voting process.

“The Addams Family 2”
“The Ape Star”
“Back to the Outback”
“Belle”
“Bob Spit – We Do Not Like People”
“The Boss Baby: Family Business”
“Cryptozoo”
“Encanto”
“Flee”
“Fortune Favors Lady Nikuko”
“Josee, the Tiger and the Fish”
“The Laws of the Universe – The Age of Elohim”
“Luca”
“The Mitchells vs. the Machines”
“My Sunny Maad”
“Paw Patrol The Movie”
“Pompo the Cinephile”
“Poupelle of Chimney Town”
“Raya and the Last Dragon”
“Ron’s Gone Wrong”
“Sing 2”
“The Spine of Night”
“Spirit Untamed”
“The Summit of the Gods”
“Vivo”
“Wish Dragon”

BEST DOCUMENTARY FEATURE
One hundred thirty-eight features are eligible for consideration in the Documentary Feature category for the 94th Academy Awards.  Some of the films have not yet had their required qualifying release and must fulfill that requirement and comply with all the category’s other qualifying rules to advance in the voting process.

Documentary features that have won a qualifying film festival award or have been submitted in the International Feature Film category as their country’s official selection are also eligible in the category.  Films submitted in the Documentary Feature category may also qualify for Academy Awards in other categories, including Best Picture.  Members of the Documentary Branch vote to determine the shortlist and the nominees.  A shortlist of 15 films will be announced on Tuesday, December 21, 2021.

“Ailey”
“All About My Sisters”
“All Light, Everywhere”
“The Alpinist”
“American 965”
“Ascension”
“Attica”
“Aulcie”
“Aware: Glimpses of Consciousness”
“Barbara Lee: Speaking Truth to Power”
“Becoming Cousteau”
“Beijing Spring”
“Bill Traylor: Chasing Ghosts”
“Billie Eilish: The World’s a Little Blurry”
“Boris Karloff: The Man behind the Monster”
“Brian Wilson: Long Promised Road”
“Bring Your Own Brigade”
“Can You Bring It: Bill T. Jones and D-Man in the Waters”
“The Capote Tapes”
“Captains of Za’atari”
“Children of the Enemy”
“Citizen Ashe”
“Convergence: Courage in a Crisis”
“A Cop Movie”
“Courage”
“A Crime on the Bayou”
“Cusp”
“Dave Chappelle Live in Real Life”
“The Deadliest Disease in America”
“Dying to Divorce”
“Enemies of the State”
“Ennio”
“The Faithful: The King, the Pope, the Princess”
“Far Eastern Golgotha”
“Fathom”
“Faya Dayi”
“Ferguson Rises”
“Final Account”
“Finding Kendrick Johnson”
“Fire Music”
“The First Wave”
“Five Years North”
“Flee”
“45 Days: The Fight for a Nation”
“Found”
“Francesco”
“Hell or High Seas”
“Homeroom”
“In the Same Breath”
“Introducing, Selma Blair”
“Iron Temple”
“Jacinta”
“The Jesus Music”
“Julia”
“The Jump”
“Karen Dalton: In My Own Time”
“Kill the Indian Save the Child”
“Kurt Vonnegut: Unstuck in Time”
“LFG”
“The Last Forest”
“The Last Shelter”
“Like a Rolling Stone: The Life & Times of Ben Fong-Torres”
“Lily Topples the World”
“Little Girl”
“The Loneliest Whale: The Search for 52”
“Los Hermanos/ The Brothers”
“The Lost Leonardo”
“Love It Was Not”
“Magaluf Ghost Town”
“Man in the Field: The Life and Art of Jim Denevan”
“Marx Can Wait”
“Mayor Pete”
“The Meaning of Hitler”
“Minnesota! The Modern Day Selma”
“Misha and the Wolves”
“Missing in Brooks County”
“Mr. Bachmann and His Class”
“Moby Doc”
“The Most Beautiful Boy in the World”
“The Mustangs: America’s Wild Horses”
“My Childhood, My Country: 20 Years in Afghanistan”
“My Name Is Pauli Murray”
“The Neutral Ground”
“A New Dawn”
“No Ordinary Man”
“No Straight Lines: The Rise of Queer Comics”
“Not Going Quietly”
“Nothing but the Sun”
“On Broadway”
“Operation Varsity Blues”
“Ostrov – Lost Island”
“Paper & Glue”
“The Paradigm of Money”
“The People vs. Agent Orange”
“The Phantom”
“Playing with Sharks”
“Pray Away”
“President”
“Procession”
“Qazaq History of the Golden Man”
“Quiet Explosions: Healing the Brain”
“The Race to Save the World”
“Radiograph of a Family”
“The Real Charlie Chaplin”
“Rebel Hearts”
“The Repentants”
“The Rescue”
“Revolution of Our Times”
“Rita Moreno: Just a Girl Who Decided to Go for It”
“Roadrunner: A Film about Anthony Bourdain”
“Ruth – Justice Ginsburg in Her Own Words”
“Sabaya”
“Seyran Ates: Sex, Revolution and Islam”
“Simple as Water”
“Sisters on Track”
“So Late So Soon”
“The Sparks Brothers”
“Speer Goes to Hollywood”
“Storm Lake”
“Street Gang: How We Got to Sesame Steet”
“Summer Nights”
“Summer of Soul (…Or, When the Revolution Could Not Be Televised)”
“Tigre Gente”
“Tina”
“Torn”
“Truman & Tennessee: An Intimate Conversation”
“Truth to Power”
“Try Harder!”
“2020: The Dumpster Fire”
“Two Gods”
“Val”
“The Velvet Queen”
“The Velvet Underground”
“Whirlybird”
“Who We Are: A Chronicle of Racism in America”
“Wojnarowicz”
“Writing with Fire”
“Wuhan Wuhan”

Ninety-three countries have submitted films that are eligible for consideration in the International Feature Film category for the 94th Academy Awards.  Some of the films have not yet had their required qualifying release and must fulfill that requirement and comply with all the category’s other qualifying rules to advance in the voting process.

An international feature film is defined as a feature-length motion picture (more than 40 minutes) produced outside the United States with a predominantly (more than 50%) non-English dialogue track.  Somalia is a first-time entrant.

Academy members from all branches are invited to opt in to participate in the preliminary round of voting and must meet a minimum viewing requirement to be eligible to vote in the category.  The shortlist of 15 films will be announced on Tuesday, December 21, 2021.

What do you think will be nominated for Best Animated, Documentary and International Feature Film at the 94th Academy Awards this year? Take a look at the NBP team’s current Oscar predictions here and be sure to leave your thoughts in the comments section down below or on our Twitter account.