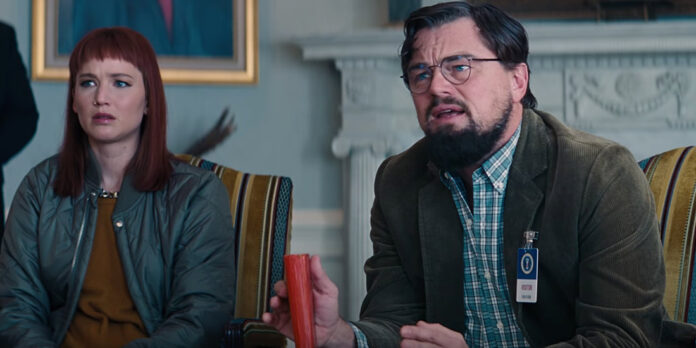 THE STORY – Two low-level astronomers must go on a giant media tour to warn mankind of an approaching comet that will destroy planet Earth.

​It’s tough to call this new era of writer/director Adam McKay’s career his “serious” phase, but it oddly feels that way. After directing more mainstream comedies such as “Anchorman,” “Step Brothers,” and “Talledega Nights,” McKay continues to direct comedies, but he’s now committed to films tackling more serious subject matter. After movies about the 2009’s housing crisis and the President George W. Bush administration, he’s moved on to the end of the world with his latest film, “Don’t Look Up.” This blistering satire tells the story of an impending apocalyptic event and the baffling incompetence and corruption which follows, hitting all too close to home in the process for what we’re currently having to deal with today’s politicians and social perceptions towards global warming. Like “The Big Short” and “Vice,” McKay’s latest film pulls no punches in his political commentary, as he continues to make some excellent points but in a primarily condescending manner to his viewers who already received the message long ago.

Written by Mckay and speechwriter David Sirota, the premise of “Don’t Look Up” is perfect for a satire of today’s political and social climate. Doctors Kate Dibiasky and Randall Mindy (Jennifer Lawrence and Leonardo DiCaprio, respectively) make an unfortunately monumental discovery: a giant comet will hit the earth in six months, destroying all life as we know it in the process. As the two, along with scientist Dr. Clayton “Teddy” Oglethorpe (Rob Morgan), warns the United States government, they’re met with surprising (or unsurprising depending on how you wish to view it) indifference and roadblocks at every turn. The media isn’t much help either, turning the pair into punching bag memes for an all-consuming audience rather than sounding the alarms to save humanity. It’s a frustrating and sadly plausible plot, highlighting so much wrong with our current systems in place should a disaster of this magnitude ever occur…oh wait! It already has! Either way, while he may be preaching to the choir about how we’ve sacrificed authentic leadership and journalism for entertainment, it’s an effective and necessary message.

Interestingly, “Don’t Look Up” was greenlit before the COVID-19 pandemic, though the script was likely tweaked to reflect our current reality. It’s easy to see climate change was the film’s main message in its initial state, but it’s impossible to ignore how much this story applies to President Trump’s mishandling of the pandemic in 2020. This is where McKay begins to lose his grip on the material. Every not-so-veiled critique of Trump is so apparent and heavy-handed, it feels like an extended SNL sketch minus the laugh-out-loud moments. It feels as though McKay is beating us over the head with the groundbreaking idea that Trump was unfit for office as if anyone who would sit down to watch his latest film would be surprised or even disagree with that point. His critiques are more than valid, but he doesn’t balance the more serious tone of the story’s end-of-the-world doomsday premise with this broad level of comedy well.

“Don’t Look Up” may be lighter in tone than “The Big Short” and “Vice,” reminding the audience of McKay’s earlier work, but nearly every joke is presented in a manner that can only be compared to the size and force of the comet heading towards earth. Early on, when Mindy and Dibiasky are trying to figure out who to call to get help with their discovery, they’re told to call the Planetary Defense Coordination Office. The absurdity of that title is funny, and it’s clear that they’re referring to an actual office. Yet, to make sure the audience got the joke, Hank Corwin’s editing freeze-frames slaps the logo and the ridiculous name of the office on the screen, along with text that says, “Yes, it’s a real office.” Why does McKay undercut his jokes so often? It was funny until he told us why we should think it was funny. There’s already so much to be appreciated in the plot, which makes this constant need to emphasize, undercut, and talk down to the audience like we’re five, all the more frustrating.

Along the way, “Don’t Look Up” features one of the most talented casts ever assembled in a single film. DiCaprio and Lawrence are joined by Timothée Chalamet (as Yule, a young man Kate meets), Jonah Hill (as Jason Orlean, President Orlean’s son and Chief of Staff), Mark Rylance (as Peter Isherwell, an eccentric Silicon Valley billionaire looking to capitalize financially on the apocalyptic event however he can), Cate Blanchett (as Brie Evantee, a Fox News-like reporter who becomes involved in an affair with the married Randall), Tyler Perry (as Brie’s co-host, Jack Bremmer), Meryl Streep (as President Janie Orlean) and so many more. Unsurprisingly, DiCaprio and Lawrence deliver the best performances in the film as their work is required to be more grounded in reality, harnessing our own fears and frustrations. DiCaprio, channeling his comedic chops once again, portrays Dr. Randall Mindy as a neurotic everyman with a ton of anxiety and ailments. He has his own fiery Peter Finch in “Network” monologue moment where he unleashes his pent-up frustration and rage live on the news. You can genuinely feel the character and the man’s passion for this severe subject and how no one is doing enough to help reverse climate change. Streep has a few amusing moments, too, playing an all-too-obvious Trump-like narcissistic president, though the writing for her character veers too broad, thus not giving the most gifted actress alive much to do. As a result, her inclusion is seen more like stunt casting than anything. Grande and Mescudi have a chance to shine with an original song titled “Just Look Up,” performed in the film as a sort of send-up of “We Are The World,” which may get some awards attention later this year for both its beautiful composition and comical lyrics.

Just shy of two-and-a-half hours, “Don’t Look Up” wears its influential premise a bit too thin. Toward the end, despite injecting a depressing tone, equipped with better than average visual effects work and an eclectic score from Nicolas Britell, McKay, and Sirota’s script had worn me out. So many great moments were paired with eye-roll-inducing ones, leaving me with mixed feelings overall on McKay’s execution. He has such excellent insight into our political and social climate. Still, he can’t resist talking down to the audience with the subtlety of a sledgehammer, as if his wisdom is far too genius for us morons to understand. Still, there’s a lot to like, and repeat viewings may be more rewarding if you can stand the long runtime and the obnoxiousness of some of its characters.