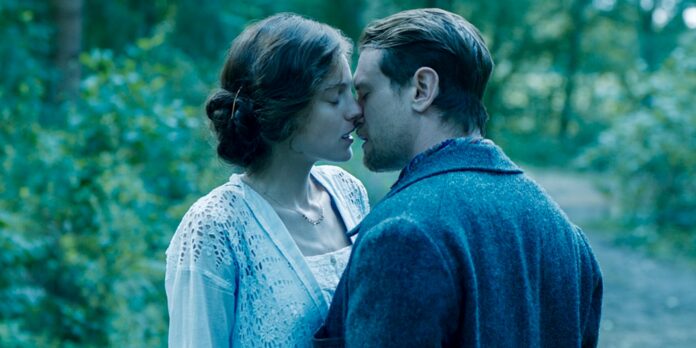 THE STORY – After falling out of love with her husband following a war injury, Lady Chatterley pursues a torrid affair with the gamekeeper on their estate and begins to uncover her own internal biases.

“Lady Chatterley’s Lover,” D.H. Lawrence’s final novel about a young married upper-class woman who engages in an affair with a lower-class gamekeeper, may have been originally published (privately) in 1928, but it remained either censored or banned entirely in many countries until the 1960s, due to its explicit descriptions of sexual acts and use of swear words. The novel has been adapted to film numerous times, but 2022’s Netflix production starring Emma Corrin and Jack O’Connell is only the second time a woman has directed it (following the César Award-winning 2006 version directed by Pascale Ferran, which was technically based on Lawrence’s second version of the story, “John Thomas and Lady Jane”). Amazingly, it has taken so long to get to this point, but here we are. It’s a good thing, though, because thanks to director Laure de Clermont-Tonnerre, this version of “Lady Chatterley’s Lover” makes good on the novel’s steamy sex while keeping its focus squarely on Constance Chatterley’s inner being, no matter how much skin is on display (which it definitely is, and lots of it).

The plot is pretty much what you’d expect: Constance (Corrin) is young and deeply in love with her new wealthy husband, Clifford Chatterley (Matthew Duckett). After getting paralyzed in WWI, Clifford moves himself and Constance from London into his family’s country estate, Wragby. Clearly struggling with his sense of self but still deeply in love with his wife, Clifford suggests that she get pregnant by another man so that they can know the joy of parenthood. After all, for all anyone else knows, he can still bear children, so there wouldn’t have to be any scandal. The lonely Constance bristles at this but eventually finds herself drawn to the estate’s gamekeeper, Oliver Mellors (O’Connell), a former army officer in the war. The two begin a torrid affair, which leads to significant changes for them both.

It cannot be denied that the sex scenes are the hottest in any film of this young decade. These scenes are where the film comes to life, thanks to Clermont-Tonnerre’s direction, which brings us in so close that we can feel the heat of every breath and every touch these two exchange, even through the screen. It’s a very savvy mirror of Constance’s awakening that occurs after she begins the affair. It’s far more than a sexual awakening, though, and Corrin is acutely aware of that. The way Constance carries herself changes after her first sexual encounter with Oliver, but thanks to Corrin’s savvy playing, we can see how her mind follows in her body’s footsteps, growing ever stronger, surer, and more independent. It feels strange to call “Lady Chatterley’s Lover” a coming-of-age story, but in Corrin’s hands, that’s what it feels like: We are watching a woman discover who she is and come into her own, and the mind-blowing sex just happens to be the impetus for that. O’Connell very nearly matches Corrin beat for beat, showing how this affair – far more dangerous for Oliver, who could lose his livelihood than for Constance – loosens up the brusque working man. Watching him throw caution to the wind and join Constance, running in the rain with complete abandon (in a scene that will surely be screen-capped to death by everyone on the internet), it feels like we are watching Oliver bust through all the walls he has built up around himself with a sledgehammer. Their chemistry with each other may be the film’s main selling point, but it’s their individual work that really makes the film work as well as it does.

The biggest problem with the film is David Magee’s screenplay. While the increased focus on Constance’s inner life and journey toward self-actualization makes sense, the novel’s other themes, unfortunately, suffer for it. The subplot involving Clifford’s plans to revitalize the mines in the nearby town by bringing in new technology remains but is so truncated that the class war brewing underneath everything barely registers. The novel’s central theme of needing both the body and the mind to live a full life is not even mentioned. This is Constance’s main struggle in the novel, and while the film makes attempts at visualizing this by emphasizing Clifford’s intellectual pursuits and lack of physical mobility in contrast to Oliver’s very physical, if somewhat brutish, ways, it makes the film feel more about sex than the novel was (despite its notoriety). The scenes between the sexual escapades, moodily morose thanks to Benoît Delhomme’s curiously desaturated, blue-tinged cinematography, feel much less stimulating because of this, too, causing a feeling of annoyance every time we aren’t in the throes of passion.

However, while this could be a fault with the film, it also feels like part of its design: As Constance realizes that she is meant to be with Oliver instead of Lady of Wragby with Clifford, so too does the audience long to be with Oliver again. If this makes “Lady Chatterley’s Lover” feel a bit dull in some stretches, Clermont-Tonnerre makes up for it by reframing this once-scandalous story as one of a woman asserting her independence. Given the novel’s history and the effects its eventual publication had on the women of the 1960s, that feels like exactly the kind of reclamation this text deserves. It may not be perfect, but the heights it does reach are truly orgasmic.