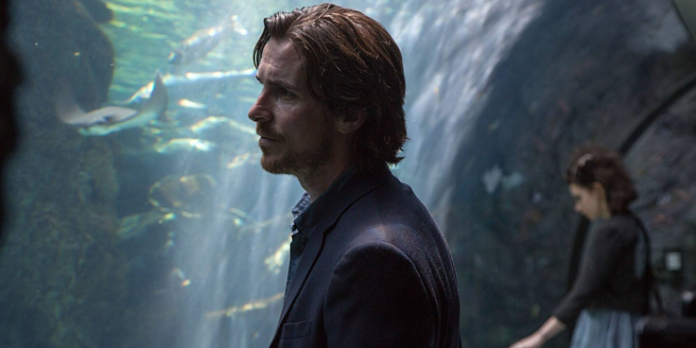 THE STORY – A Los Angeles screenwriter (Christian Bale) indulges his wild side with a stripper (Teresa Palmer), a model (Freida Pinto) and a married woman (Natalie Portman).

Terrence Malick is a visionary who has carved out a piece for himself in the history of cinema to stand alongside some of the other greats who used the medium to change the art form such as Wells, Hitchcock, Goddard, Fellini, and Tarkovsky. Known for taking long breaks in between films, it’s clear that his 3 most recent films (“The Tree Of Life,” “To The Wonder,” and now “Knight Of Cups”) are extremely personal to him and all share the same cinematic language. As an experiment for one film, I not only appreciated it, but I loved it. Employing it again for a second film, I was left frustrated yet hopeful that Malick could return to the brilliant storytelling he applied in films such as “Badlands” and “The Thin Red Line.” Now after three films, I have to conclude that this will be Malick’s style moving forward and that the laws of character and plot don’t apply to him anymore. There will surely be fans of this type of bold filmmaking who cry out that Malick is a cinematic genius and there’s no doubt that Malick is defying the laws of how to tell a story on film, but in “Knight Of Cups” there is no story. There are only images and what you make of them.

​”Knight Of Cups” follows a Hollywood screenwriter named Rick (Christian Bale) who is metaphorically sleepwalking through his life in Los Angeles. He is having to contend with his brother’s death and the troubled tendencies of his living brother Barry (Wes Bently). There’s also the issues with his aging father (Brian Dennehy) and an endless supply of women in his life (Some more serious than others, here played by Cate Blanchett and Natalie Portman). All of the luxuries of living the Hollywood lifestyle are not enough to satisfy Rick and he is searching for meaning in his existence.

Sounds like there is a possible story here right? I’m sure at one point there was, but Malick’s frustrating editing (Three editors worked on this film) and his consistent use of voiceover above traditional dialogue between characters results in every scene neither being engaging nor intellectually stimulating. I could sit here and explain to you in detail what I thought Rick might have been going through in this film and what it meant to me and perhaps that is what Malick wants. His films are like paintings, with many interpretations, that may even change over time. However, the big difference between a painting and a film is that I tend to look at a painting for maybe a few minutes before I come to a conclusion of what it may be saying to me, this film is nearly two hours!

Malick wants Los Angeles to feel like a dream world and he once again employs legendary cinematographer Emmanuel Lubezki to shoot his movie. Acclaimed for his work on “Gravity,” last year’s “The Revenant” and other Malick films such as “The Tree Of Life,” (I can’t believe I’m saying this) but even Lubezki simply can’t save this film. It appears that he is once again using natural lighting to photograph Los Angeles and using the swooping camera shots to glide through the scenery hoping to put our minds in a state of deep thought, much like how Rick must be feeling. However, his framing and cinematic techniques that he used to a better degree on his other collaborations with Malick fail here. There isn’t even a memorable score to distract us from the continuous bore that this film is on all levels. Every actor is completely wasted here as we get only fragments of what possibly could’ve been engaging scenes if they had not been chomped to bits by the film’s editing. Sadly we’ll never know.

Despite all of the complaints, “Knight Of Cups” will continue to have those who hail it as another brilliant cinematic work from the legendary writer/director Terrence Malick. If this is the style that he chooses, I’m sure that it will make for some pretty great conversations and analysis much like any other works of art do. It’ll be years (perhaps decades) before we know if Malick’s style transcends the medium and becomes a lasting work which is looked upon favorably, as other great works of art have after they too came under heavy controversy for defying their conventions. But for right now, I can’t recommend general audiences to see this film. It’s simply too different than what decades of cinema have trained us to think is the norm in conventional storytelling.