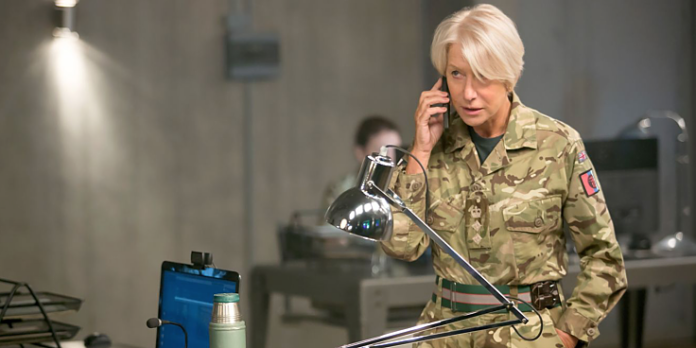 Traditionally when one says “what you are about to see is a war film” you imagine men and women in uniform with guns shooting at the enemy in a foreign country. “Eye in the Sky” is a different kind of war film. It’s a contemporary showcasing of just how greatly our military tactics have changed with the increased use of technology. This is not the typical modern warfare you see portrayed in video games and sensationalized blockbuster action films. This is a different age of combat where the rules of engagement are meticulously planned and carried out in such a way that the men and women pulling the trigger of  a deadly drone strike can be thousands of miles away and not have to directly face the consequences of their actions.

“Eye in the Sky” takes place in 4 different locations. Col. Katherine Powell (A steely resolved Helen Mirren) is leading a target capture mission from a U.K. base compound while her commanding officer, Lt. General Frank Benson (Alan Rickman in one of his final film roles) is in another part of the country watching all of the events of the mission unfold on large screens. He is joined by higher-ups in the British military along with the Attorney General and British Prime Minister. Drone pilot Steve Watts (Aaron Paul) is in control of the drone acting as the “eye in the sky” and is joined by a new recruit Carrie Gershon as his co-pilot. Meanwhile, they are all being assisted by a Somalian agent in Kenya (Barkhad Abdi) who is using his own eyes and advanced computer controlled cameras to be everyone’s eyes on the ground.  The mission takes a drastic turn when what was once a capture mission turns into a shoot-to-kill mission when their targets are seen plotting to carry out a suicide attack presumably in a heavily populated area.

“Eye in the Sky” is a brilliant representation of what modern day combat looks like from all aspects. There is a tremendous amount of scrutiny in every decision that is made resulting in a clash of different ideologies and beliefs from the players involved. The entire ensemble does a good job of selling their own personal inner struggles on the mission but it is Helen Mirren who stands out the most. You can tell she is highly invested in the mission after working for 6 years to track down the highly wanted targets. She finally has them in the perfect position to take them out once and for all. But in order to do so, she has to get clearance and “Eye in the Sky” does a brilliant job of showing how difficult that can be when so many parties are involved and nobody wants to take full responsibility due to the possibility of collateral damage on the ground.

The shifts in responsibility result in a few darkly comic moments of absurdity depending on your beliefs of how you the audience member feels the mission should be carried out. The film moves fast as the ticking time bomb is literally and figuratively set to go off and nobody wants to come out of this situation on the wrong side of it. One gets the sense that actual ground warfare with guns and other forms of human interaction would be so much simpler than all that has to go into a single decision that must be made here. It’s due to the time that is allotted to these men and women which other soldiers in visceral combat are not usually afforded, that every opinion is called into question instead of a “shoot now and ask later” approach.

“Eye in the Sky” is an all around solid modern day showcase of what our means of combat has become against our enemies. The political, legal and moral ramifications of pulling the trigger from a far away distance which can result in the loss of life (Intended and unintended) are terrifically explored by writer Guy Hibbert. Director Gavin Hood ratchets up the tension to a boiling point and is in firm control of the film’s pacing throughout. My only gripe is I wish more time could have been dedicated to each character’s backstories, for we only get a sense of who they are through their actions. Having a chance to fully flesh them out would have lent even more weight to the proceedings and it’s due to their shortcomings that the film teeters on being considered forgettable. However, “Eye in the Sky” remains thought-provoking in its ideas of present-day warfare and presents them in a matter that entertains and terrifies.