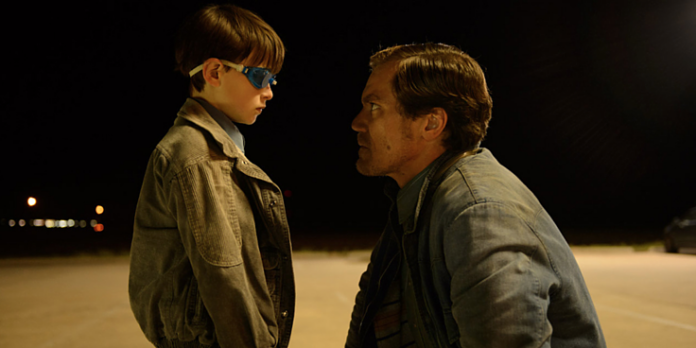 Made with the same southern qualities that his previous films have featured, writer/director Jeff Nichols once again delivers a film that is at times personal, at times opulently obscure and always engrossing. “Midnight Special” is his biggest film to date and pairs him up once again with his go-to actor Michael Shannon, who he has previously collaborated with in all of his other films. The science fiction premise that centers around the lengths one father will go to in order to protect his son harkens back to the classic film “Close Encounters of the Third Kind” in its ambiguity, tension, and final emotional release.
​
​Set in present day Texas, divorced father Roy Tomlin (Michael Shannon) has kidnapped his biological son Alton (Jaeden Lieberher) from his adoptive father Calvin Meyer (Sam Shepard) who runs a religious sect called “The Ranch.” Aided by his friend Lucas (Joel Edgerton) and Alton’s mother Sarah (Kirsten Dunst), Roy must go to great measures to keep Alton safe, while they are being tracked down by the FBI, CIA and local law enforcement across state lines. Paul Sevier (Adam Driver) runs a government task force that is trying to locate them and is looking to understand just what exactly Alton’s significance is when strange occurrences beyond anyone’s comprehension start happening around the young boy.

Is Alton a weapon? Is he even human? What is his purpose? These are all questions that Nichols takes his time addressing and sometimes does not even bother to discuss, which may alienate some viewers. The film starts right after Roy and Lucas have kidnapped Alton with no real backstory on who these men are in relation to him and what is ultimately going on. The story doesn’t bother to take its time to explain itself in an effort to get the audience caught up. Part of the fun of “Midnight Special” is how the film thrusts us into the action and lets the characters express themselves over time as the story slowly unfolds. The pacing is deliberate allowing for certain aspects of the mystery to reveal itself while other larger aspects are left to the imagination.

But these undiscussed plot mysteries are second to the real story at play here, which is the bond that Roy has with his gifted son. Any parent will be caught up in how far Roy is willing to go, even if he doesn’t fully understand how he will get towards the end game. For a majority of the movie, he doesn’t even know what the end game is. He just knows that he has to get his son to a certain location by a specific date. Why? Because he believes in his son. Alton is viewed as a god-like savior by some characters of the film. To others, he is viewed as a great threat. But all Roy see’s is his son of 8 years old who he loves dearly and Shannon plays him in a reserved yet passionate performance that accomplishes so much without over dramatic theatrics.

There is an inherent degree of danger that surrounds the entire film as our main characters are consistently hunted down, yet the film is also warm and moving. The partly ominous and fantastical score by David Wingo perfectly helps to establish the mood of the film while keeping us engaged every step of the way. Nichols once again uses his cinematographer Adam Stone to give the film a polished look that is never too dark nor too overly bright. In fact, one of the film’s themes explores the light versus the dark and how that clash is personified in our own view of the world.

It’s best not to divulge into spoilers here and suffice to say, you should see “Midnight Special” with as little knowledge pertaining to the film as possible. Nichols is now four for four in his filmmaking career after making “Shotgun Stories,” “Take Shelter,” “Mud,” and now “Midnight Special.” His films are never overly convoluted nor gimmicky in their execution. He is concerned with the most humanistic qualities that are influenced by his southern roots and which he grounds within reality. “Midnight Special” may be a science fiction film, but the relationship between father and son and the film’s exploration of blind faith (In the religious or metaphysical sense) is relatable and thematically complex. It’s journey and power relies on the exploration of the unknown and that is right where Jeff Nichols takes us.