Initial Thoughts On “House Of The Dragon” 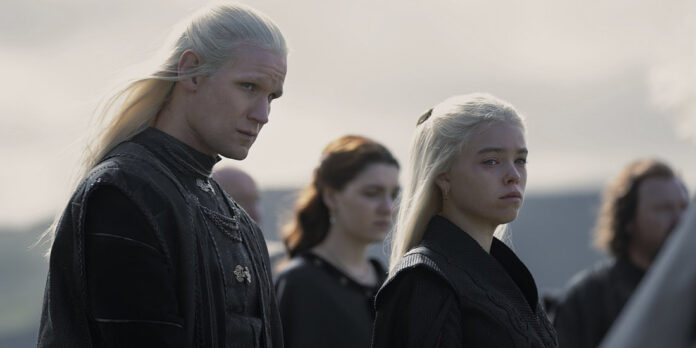 On August 21st, 2022, “House of the Dragon” premiered on HBO to a record-breaking near ten million viewers for its first episode. It is the first official spin-off entity of one of HBO’s most popular entities, “Game of Thrones,” which aired from 2011 to 2019, breaking records across the television landscape and collecting 59 Primetime Emmys over the course of its eight seasons.

Based on Fire and Blood by George R.R. Martin, “House of the Dragon” takes place 172 years before the birth of Daenerys Targaryen, one of the main characters of “Game of Thrones,” and follows the Targaryen family in King’s Landing, where they rule over Westeros. This is a clever move for a spin-off, having its story take place nearly two centuries before the events of its original narrative. It allows the creatives to have distance from the original story while still taking place in the same world.

And for the majority of the pilot, it succeeds. Creator and showrunners Ryan Condal and Miguel Sapochnik, who served as directors on “Game of Thrones” (and Martin), provide a great introduction to their version of Westeros under the Targaryen dynasty. The scope is still grand, and it carefully establishes meaningful character relationships that are essential for a journey in Westeros. But at the end of the pilot, King Viserys (Paddy Considine) articulates to his daughter Rhaenyra (Emma D’Arcy), warning her of a secret that has been passed down from King to his heir. The secret is that a Great War will eventually come and endanger all men in Westeros. That Great War Viserys is referring to is, of course, the Long Night, the supposedly main event of “Game of Thrones,” which, in reality, only lasted an episode in the final season and was barely visible the entire time. Most viewers, who were assumedly former watchers of “Game of Thrones,” know that the Great War wasn’t that great. The line, unfortunately, reminds viewers why it took so long for a “Game of Thrones” spin-off to occur: “Game of Thrones” had a horrible ending.

Spin-offs are incredibly difficult to pull off, especially when they are connected to a popular or divisive unit. “Game of Thrones” happens to be both. It was arguably one of the greatest shows in the 2010s and showcased the cinematic potential and grand scale that can occur on television. But it also had, arguably, the worst endings in television history. The rise and fall of “Game of Thrones” is fascinating, as it both ascended and descended from the popular culture stratosphere at an exceptional rate. So much so that the idea of a spin-off became controversial. So controversial that HBO actually canceled a “Game of Thrones” spin-off after a pilot was filmed.

As mentioned, the spin-off, in general, is risky. The job is not only to tell an original story but to provide enough familiarity within a world that an established audience already loves and has preconceived notions about (hopefully attracting a new audience). The creators have to recreate magic but also make something new and exciting, which is a tall order, especially in television. A lot of spin-offs or prequels aren’t successful due to not being able to find this balance, like “Joey” (the spin-off from “Friends”), “Once Upon a Time in Wonderland,” “Heroes: Reborn,” and “The Perfectionists” (the spin-off of “Pretty Little Liars”) to name a few. But, there are also some that are widely successful and are on par or eclipse the original show, like “Better Call Saul” from the Breaking Bad universe or “Angel” from the Buffyverse. Heck, even “The Simpsons” can count as a successful spin-off.

The key to a successful spin-off is to be familiar enough but completely different. The characters or atmosphere of the show itself should be enough (especially when dealing with pre-existing characters). This is why a story set so far away from the events of “Game of Thrones” could work. It is so far removed from the disappointing final seasons and is based on the lore and family dynamics that the show was built on, which is one of the world’s strengths. Dealing with entirely new characters allows its audience to start somewhat fresh. We are still in Westeros; we are still in King’s Landing. We know the rules that are bound to be broken and the consequences that will come with them. The scale is nearly identical, the production design is exquisite, and composer Ramin Djawadi’s (identical) motifs provide enough nostalgia and familiarity. That is all HBO needs. But having the characters directly sight not only the original show but an element that is part of the show’s biggest failures only hurts “House of the Dragon.” Audiences know that the Long Night isn’t as eventful or prominent as Viserys states it is. The line reminds people that this creative team knows how to start a show but doesn’t know how to end it, which can make the built-in audience apprehensive. They don’t want Rhaenyra to suffer the same mistreatment as Dany. They don’t want an anti-climatic ending. They don’t want to invest so many hours into a show that will hurt them like “Game of Thrones” did.

Simply put, this creative team and HBO have to build trust back with its audience, and explicitly citing “Game of Thrones” will not do that. “House of the Dragon” has potential. It is obviously way too early to tell, but the pilot was a strong episode that laid the groundwork for what could be an exciting story. But for the best interest of this show and the characters at hand, it would be wise to distance “House of the Dragon” from “Game of Thrones,” particularly the later part of it. There is no need to remind one’s audience about events that take place two centuries before the current story at hand that simply wasn’t executed well. We will not see these characters in “Game of Thrones,” therefore, there is no need to mention the events that occurred during that time. If Condal, Sapochnik, and HBO are smart, they will just focus on the current story at hand, which might result in a successful viewing experience for all and restore the legacy of the Song of Ice and Fire.

What did you think of episode one of “House Of The Dragon?” How did you feel about the ending of “Game of Thrones?” Did HBO’s spin-off win you back with its return to Westeros? How do you feel about the show moving forward? Please let us know your thoughts in the comments section below or on our Twitter account.